Bruges is a beautiful little city, situated near the North Sea coast. Its small size, a population of about 120,000, and its temperate climate make it a delightful place to visit, all the year round. The city’s history is reflected in its historic buildings and enchanting, medieval architecture.

A trip on one of its canal boats is a must while throughout the year, tours take place to the town of Ypres, and locations associated with the Great War. Several festivals take place, beginning with the Beer Festival in February. The procession of the Holy Blood happens in late spring. Music lovers will enjoy the Bruges Cactus Festival  in July and the MA Festival takes place in August. The Christmas Market rounds off the year.

What is the Best Time to Go to Bruges

Beautiful at the best of times, Bruges is at its most enchanting in fine weather, when the gables, red tiled roofs and spires of its medieval buildings appear to be dozing in the sunlight. Visitors should walk about or take a canal boat trip as early as possible in the morning or later in the afternoon, when fewer people are around. For this reason, it is a good idea to travel to the city when no major events are taking place. Though small and easy to negotiate on the transport network, the town is rich in history. The Onthaalkerk or Church of Our Lady was built in the 1200’s. Its fine, gothic structure houses the tombs of Charles the Bold, Duke of Burgundy and his wife, Duchess Mary. The Groeninge Museum houses medieval art and early modern paintings, including works by Jan Van Eyck and Hans Memling. 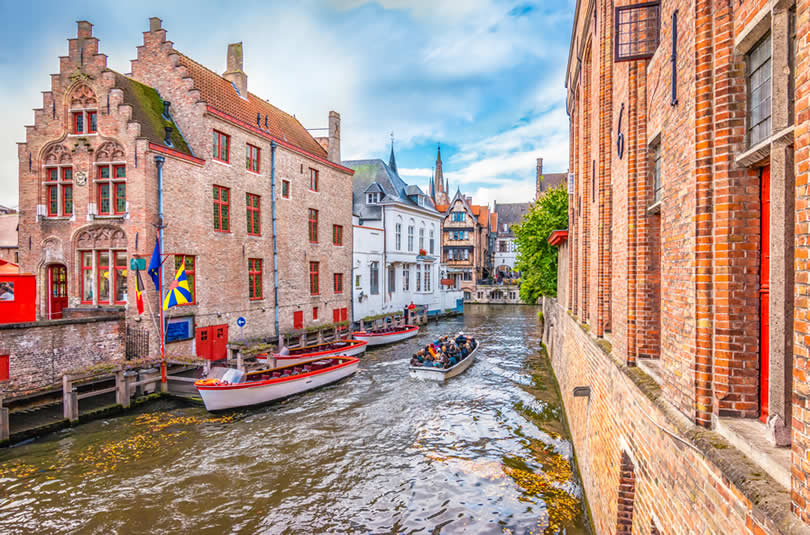 The Bruges canal boat network runs from March to mid-November. The boats roll out at 10:00 a.m. and cease to run at 6:00 p.m., with the last departure taking place at 5:30 p.m. The trip lasts about thirty minutes, and five landing stages are available for visitors to get on board and to disembark. These locations include Wollestraat, which is just south of the city centre and also Nieuwstraat, Katelijnestraat, Huldenvettersplein and Rozenhoedkaai. Obviously, the less time you need to queue to board a boat, the better. To avoid the crowds, visit the city while the schools are still open, which means before and after the Easter holidays, before the summer holidays begin and from September onward, when the schools open again.

The Bruges Christmas market runs from the last week in November to New Year’s Day, with a brief respite for Christmas Day. This five-week span offers visitors the opportunity to pick the most appealing time for their trip. The Christmas market is well worth visiting; for its duration, the medieval centre of Brugestwinkles with lights, transforming it into a little fairyland. In addition, an open-air ice rink is available to visitors. If you want to imbibe that just-before-Christmas atmosphere amid the crowds, while enjoying a hot chocolate and a waffle, then your best time to visit Bruges is the week before December 25. However, you may be able to avail of less expensive travel fares and accommodation in the earlier weeks of the market. In addition, you will have first choice of the hand-crafted goods on sale from the street stalls.

Best Time to Avoid the Crowds

Bruges is a beautiful city, one that is well worth visiting. However, this appeal means that it is filled with visitors for much of the year, which has a downside for the person in search of a quiet time. Furthermore, the most enchanting aspects of Bruges, its quaint streets and medieval architecture, can lose much charm when crowded with sightseers. The best way to avoid the crowds is to travel off-season, when the schools are open and visitor numbers are down. At any time of the year, go sight-seeing earlier in the day, before the market place and streets fill up with people. Another option is to leave the city behind for a while, and take one of the many excursions on offer, a way to see aspects of the beautiful, Flemish countryside.

Best Time for Saving on Accommodation

Like the majority of world cities, Bruges offers a wide range of hotel, hostel and B&B accommodation to visitors. You will find 4-star hotels near Burg Square, from 50 euro per night, while rooms and suites costing between 50 euro and 60 euro are available at locations such as Katelijnestraat and Riskajersplein, about half a mile away. However, with its network of public buses and taxis, travelling to attractions at the centre of Bruges is never a problem. To pay the lowest accommodation rates, travel to the city when no major events or festivals are taking place. Also, avoid travelling when the schools are closed.

Bruges weather is fairly temperate. The average temperatures for December and January range between three and six degrees, while temperatures for June, July and August range between fifteen and twenty-five degrees. In these summer months, the city receives an average of seven hours’ daily sunshine. Fine weathercannot be guaranteed, of course, but the average number of rainy days in summer ranges between nine and ten, every month. Spring and autumn are equally temperate, with the thermometer reaching between six and twelve degrees from March to May, and from fifteen to seven degrees between September and November.

The events in the city begin in February, with the Bruges Beer Festival. At this time, the temperature is likely to be a frosty three or four degrees during the day, but not to worry; one of the 400 beers on offer at the festival’s heated tents will warm the cockles of the visitor’s heart. For guests who prefer milder weather– and an opportunity to experience a canal trip – then travel to Bruges in March, when the boats beginning running following the winter closure. The later in spring that you travel, of course, the milder the weatheris likely to be. On Ascension Day every year, usually in late May, the very moving and solemn Procession of the Holy Blood takes place. At this time, temperatures can reach as high as twenty degrees.

Summer (End of June through September)

By early summer, Bruges is beautiful, filled with blooming flowers and green trees. It is a joy for the visitor to stroll along one of its streets, or take a trip on one of the boats as weeping willows overhang the canals. Temperatures at this time are likely to be upwards of fifteen degrees, possibly as hot as twenty-five degrees. This is the ideal time to take an excursion into the Flemish countryside, possibly on the Great War Flanders Field day tour. Summer in Bruges is definitely music time and in early July, punters can look forward to the three-day Cactus Festival. Both established groups and fresh musical talent is featured at this one-stage event. One month later, the MA festival takes place, and Bruges fills with Baroque and Renaissance music players, many of them performing in historical dress. 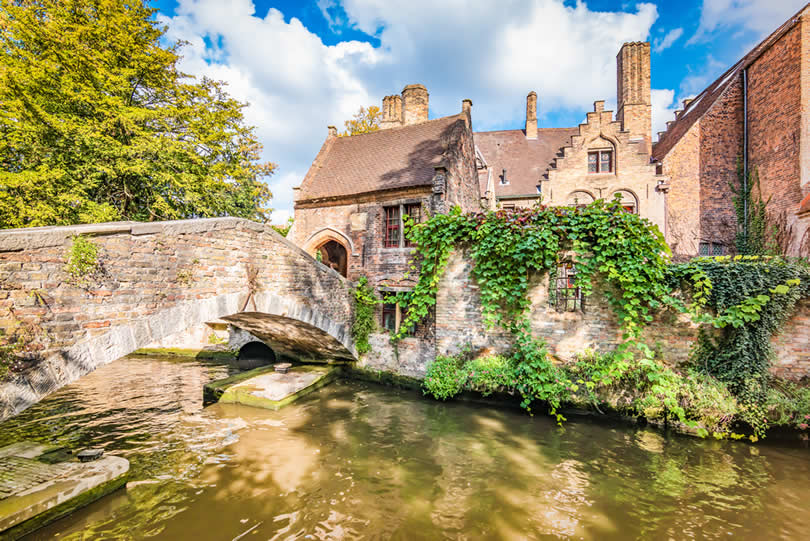 In autumn, Bruges takes on a new charm. With the shortening days, the temperatures cool from an average of twelve degrees in September to six or seven degrees in November. The brilliant green of the spring and summer foliage has faded to seasonal gold and brown, and many of the flowers have gone. However, there is still time to make a canal trip before the boats close down in mid-November, while attractions like the paintings of the Groeninge Museum and the Church of Our Lady are open most of the year. The transept of the church houses a Madonna and Child sculpture, which experts believe may have been executed by Leonardo da Vinci. The majority of the summer crowds are gone and now is the time to make the most of the city’s more off-beat charms, such as listening to a carillon concert from its thirteenth-century bell tower.

Winter (End of December through March)

Winter temperatures in Bruges average between three and six degrees during the day, though they fall to below freezing at night, and the canals are liable to freeze over. In the short, dark days, the city lights up, most notably because of the annual Christmas market. Centered in the city’s Market Square, this Christmas event spills into the other streets of Bruges and lends it a charm and vivacity that attracts visitors from all over Europe. Heavy snowfall over Bruges is unusual but now and again, a sprinkling of the white stuff rests upon the medieval roofs and gables, rendering them the delight of artists and photographers. Of course, historical attractions remain open during the winter months, and visitors can also make trips to the nearby towns of Zebrugge and Ostend. Winter is also a good time to go walking or cycling.

Every February, the city’s reputation for fine brewing is celebrated in the Bruges Beer Festival. Inside of heated tents set up in the Market Square and Burg Square, visitors can sample the four hundred or more beers produced by eighty breweries. Even better, entrance to the festival is free.

The Bruges Christmas Market, one of the most famous in Europe, begins in late November and lasts until New Year’s Day. The entire event is a magical experience that visitors love. Market Square, the heart of the event, is lit up like a miniature fairyland, though the actual market reaches into a number of streets. In addition to the many stalls, visitors can enjoy a skating rink.

The Bruges Cactus Festival is a gathering of off-beat musical entertainment that takes place over three days in the first week of July. The festival is a “one stage” event so that visitors are right where the action is, all of the time. Intending visitors can apply online for tickets.

4. The Procession of the Holy Blood

On Ascension Day, every year, the Procession of the Holy Blood takes place through the heart of the city. This Catholic event dates back to the 1300’s, when the Count of Flanders returned from the Second Crusade, with a phial bearing what he believed to be the blood of Christ. Dramatizations of Biblical events also take place.

From April onward, lovers of classical music can apply for tickets to gain entry to the MA Festival, which takes place in early August. In addition to enjoying groups performing medieval and Baroque music, visitors have the opportunity to see competitors in the International Competition of Antique Music.

Because of its proximity to the town of Ypres, visitors to Bruges have the opportunity to join the Great War Flanders Fields minibus tour. On this 9-hour trip, visitors see the battlefields and bunkers associated with the war, in addition to the poppy fields of the Flemish countryside. 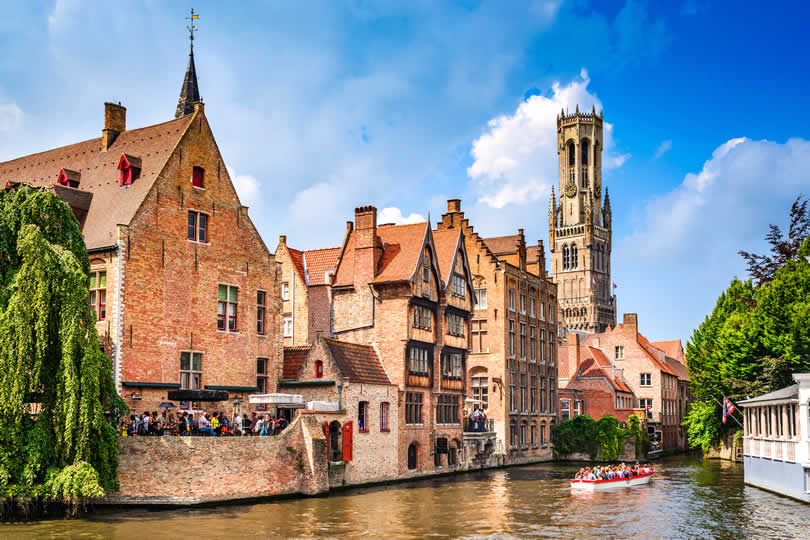 Popular in / near Bruges Belgium

Book Hotels in Bruges
Scroll to top
By continuing to browse this site, you are agreeing to the use of cookies, whose purpose it is to provide web analytics and measurements of visitor traffic and browsing behavior. Find out more.