Hotels in Blackpool with Hot Tubs

Hotels with Jacuzzi in Room

Many accommodations can be found in Blackpool Lancashire. Cheaper or more luxurious 4 and 5 star hotels or b&b rooms located on Blackpool’s promenade and seafront near the beach.

Popular by our visitors

Hotels are surrounded by numerous restaurants, shops, cafés and bars. Some luxury hotels offer luxurious bedrooms which have a spa bath, whirlpool or hot tub in room. Enjoy and relax in a private jacuzzi, the beach is only minutes away.

With views of Blackpool seafront, The Norbreck Castle... read more

A short walk from the Central Pier, Greenmount... read more

Situated in the heart of Blackpool, just 2... read more

A 5-minute drive from Blackpool Tower and 10... read more

A 10-minute walk from Blackpool Tower and just... read more

Located on the beachfront in Blackpool and featuring... read more

Located in Blackpool and with Blackpool South Beach... read more

Set in Blackpool in the Lancashire region, with... read more

Situated in Blackpool in the Lancashire region, with... read more

In the Blackpool Centre district of Blackpool, close... read more

In the North Shore district of Blackpool, close... read more

Featuring a bar, Bradburys of Blackpool is located... read more

Blackpool North Shore — the North Shore of Blackpool moves north from Gynn Square. It’s a quieter and a more relaxing area perfect for scenic quiet walks (North Shore Cliffs) and with some great 4 and 5 star accommodations. Blackpool attractions can easiliy be reached on foot or by tram.

Blackpool’s North Pier was the first pier to be constructed in Blackpool in 1862, and was actually opened on the 21st May 1863. The current North Pier theatre can seat 1500 people. Today the theatre hosts many summer shows such as the Joe Longthorne, QEII – Queen and Freddie Mercury Tribute Show, and Five Star Swing among many others. Website — Blackpool North Pier , Address — North Pier Promenade Blackpool FY1 1NE, United Kingdom

The beautiful Victorian Grand Theatre in Blackpool’s North shore on Church Street was opened in 1894 and is a Grade II listed building. It’s one of the most beautiful theatres in the country. The interior circular decor is magical. The Grand offers a diverse range of shows from dance, plays, opera, musicals and concerts. — Grand Theatre, Address — 33 Church Street Blackpool, Lancashire FY1 1HT, United Kingdom.

The area primarily around Queen Street and Talbot Square is the core of Blackpool’s fabulous gay scene and attracts thousands of gay and straight visitors every year. There is the famous Funny Girls Cabaret Show Bar and other numerous clubs, bars, cafes and restaurants. Funny Girls is a burlesque cabaret showbar with a cast comprises out of male dancers, and drag performers. — Funny Girls Blackpool, Address — 5 Dickson Road Blackpool, Lancashire FY1 2AX, United Kingdom.

Blackpool North Shore Golf Club is a private members club set in 98 acres, situated 500 yards from the North Promenade and 2 miles from the town centre of Blackpool. Blackpool is the premier English resort on the North West Coast of England.

The course is a links type course with rolling fairways and good-sized greens. Its traditional and well-furnished Club House offers magnificent views of the Lake District, the Forest of Bowland, Bleasdale Fells and the Pennine Hill range. 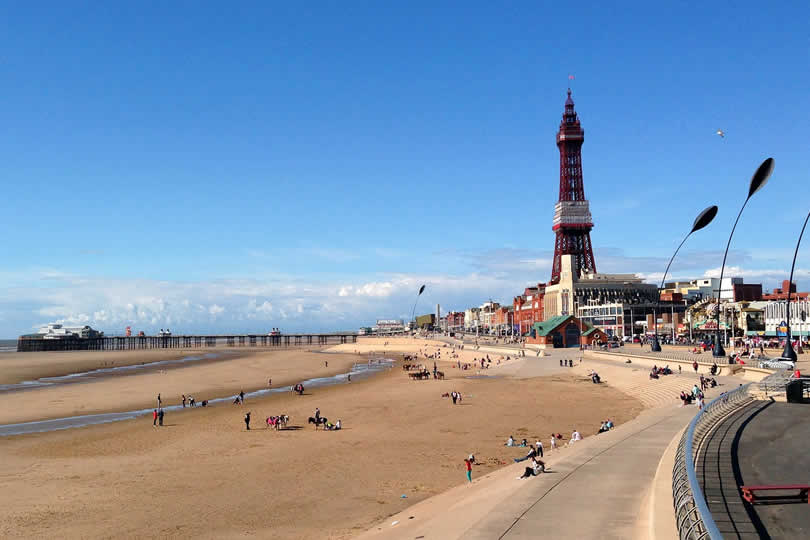