Sochi is Russia’s busiest summer seaside resort, but as the summer season will finish before the Formula One Grand Prix, you should have no trouble finding reasonably priced hotels, or other accommodation for your stay. This ‘Russian Riviera’ district also takes in the nearby seaside resort of Adler and the ski-slopes of Krasnaya Polyana.

Wherever you stay in Sochi you will be close to the F1 Grand Prix circuit, while hotels in Adler or Krasnaya, are only a couple of kilometers away.

Sochi, often known as the ‘Black Sea Pearl’, has plenty of hotels, apartments and other accommodation built to cater for visitors to the city and Sochi Autodrome, which are ideal for the Formula One season.

This hotel is set in the centre of... read more

This hotel is located in Adler, just a... read more

Located in Adler, at the Black Sea coast,... read more

Located next to the public beach on the... read more

Located less than a 20-minute walk of the... read more

Located in the city centre of Adler, a... read more

Offering an outdoor pool and an indoor pool,... read more

Featuring an outdoor swimming pool on the roof... read more

This hotel is located in Adler, a 2-minute... read more

Located a 3-minute walk from the Black Sea... read more

Located a 15-minute walk of the Black Sea... read more

Zoremma Mini-hotel is located in Adler, a 5-minute... read more

Featuring an outdoor pool and a terrace, Astra... read more

Set within 2.9 km of Olympic Beach and... read more

The 3-stars Modart Hotel is set on the... read more

Omega Sirius has a restaurant, fitness centre, a... read more

To escape the noise for a while, head to the surrounding countryside of the Agura Valley, with its amazing waterfalls, or relax in magnolia filled spaces, such as the Riviera Park. In between the Formula One circuits, take some time to explore Sochi itself, and visit its large Discovery World Aquarium.

For the best accommodation deals book online in advance, or choose hotels in Adler, which are generally more suited to budget travelers.

The town is a little spread out and can be hilly, but getting from your accommodation to the Grand Prix circuit is easy by bus, or the mini-bus Marshrutka service, both of which run frequently and cheaply around the town, and out to the airport at Adler.

The Sochi Autodrome is a high-tech complex perfectly designed for hosting international motor sports, and is the only Russian circuit to operate around the year. If you’re coming to Sochi to watch the 2021 F1 Grand Prix you will find plenty of cheap deals on hotels and accommodation in the area. Book the Best Russian Grand Prix Hotels.

The Russian Formula One, or F1, Grand Prix takes place in Sochi from September 23rd to September 26th, 2021. This Formula One circuit is one of the longest in the F1 calendar, with the 5.9 km street course, looping around the Winter Olympic Park. Only the tracks of Spa Francorchamps and Silverstone are longer.

The F1 Grand Prix has been held occasionally in Russia since its 1910 staging in St. Petersburg, and Sochi is planned as Russia’s Formula One venue for the next few years.

After its inaugural year in 2014, Sochi was named by professional drivers as one of the best F1 racing tracks. 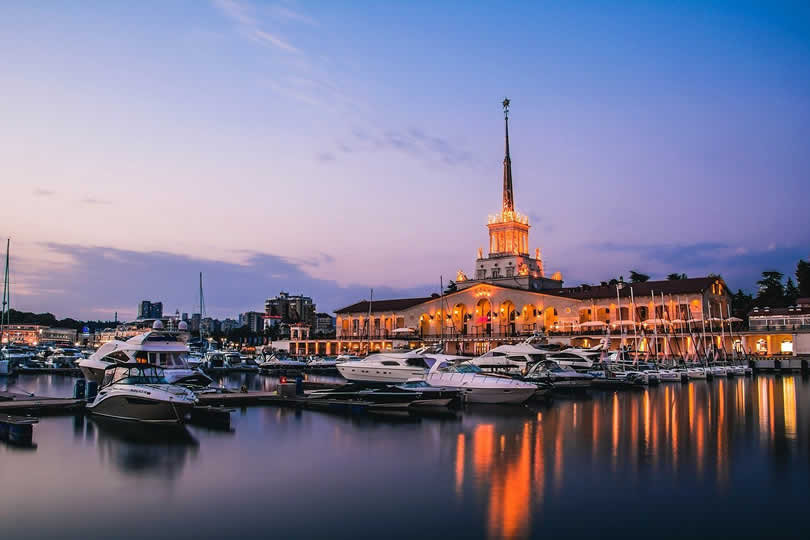 Hotels are located either in Soviet style buildings with fairly minimalist architecture, or in attractive old guest houses, which are often family-run. Sochi is also popular with youngsters using cheap hostels and B&B accommodation.

Hostels offer good deals on single and dormitory rooms, and many have terraces or BBQs for guests to use. Some have heating, so will be a perfect choice for October.

When planning your visit to Sochi for the Formula One Grand Prix, don’t forget to pack your phrase book, as many hotel staff won’t speak English, and remember to organize your visas to enter Russia.

The resort has a lively nightlife, with plenty of restaurants and bars to enjoy when the motor-racing has finished.

Location — Sochi Race Track is located at the venue used for the 2014 Winter Olympic Games.

Hotels near Race Circuits in Europe
Silverstone Circuit Accommodation
Spa Francorchamps Race Hotels
Scroll to top
By continuing to browse this site, you are agreeing to the use of cookies, whose purpose it is to provide web analytics and measurements of visitor traffic and browsing behavior. Find out more.