The new Nouveau Stade de Bordeaux has replaced the old Chaban Delmas stadium. It opened in May 2015 and has a capacity of 42,000 spectators. The stadium has been designed by Swiss firm Herzog & de Meuron, which is the team behind the Allianz Arena of Bayern Munich.

Currently it’s the home ground of Football Club des Girondins de Bordeaux. It hosts also several rugby matches of the French rugby union team Union Bordeaux Bègles. You will find a wide choice of hotel accommodation in and near the city center and transport hubs, or in the suburbs. Some of the best hotels near Matmut Atlantique football stadium are listed below.

Accommodation in Bordeaux near Matmut Atlantique

This Chateau is located 9 kilometres from Bordeaux,... read more

This Novotel sits on the shore of Bordeaux... read more

Located near Bordeaux Lac, at the gates of... read more

This Appart Hôtel is an eco-friendly residence located... read more

Located in the north of Bordeaux, The Originals... read more

Located next to Bordeaux Lake, 500 metres from... read more

A 5-minute drive from Bordeaux Exhibition Centre and... read more

The Stade Chaban-Delmas was known as Parc Lescure until 2001. It’s is a football and rugby union stadium in Bordeaux, France.

The stadium was the home ground of FC Girondins de Bordeaux until 2015. Union Bordeaux Bègles rugby club still plays most of their matches in this stadium.

The current stadium of Chaban Delmas has a capacity of 34,327 places and it was built in 1938. The stadium hosted the 1997-98 Heineken Cup final, hosted two matches of the 1999 Rugby World Cup and four matches of the 2007 Rugby World Cup. Its current name is a tribute to Bordeaux’s former mayor from 1947 to 1995, Jacques Chaban-Delmas.

On 19 July 2011, the club announced plans to construct a new stadium with a seating capacity of 42,000, located in Bordeaux-Lac. The Nouveau Stade de Bordeaux was opened in May 2015.

Book places to stay around the new football and rugby stadium of FC des Girondins de Bordeaux and Union Bordeaux Bègles in France. The nearest hotels are located near Bordeaux Lake, a 15-minute drive from the historic city center district, and not far from the Congress Centre and the Exhibition Centre. 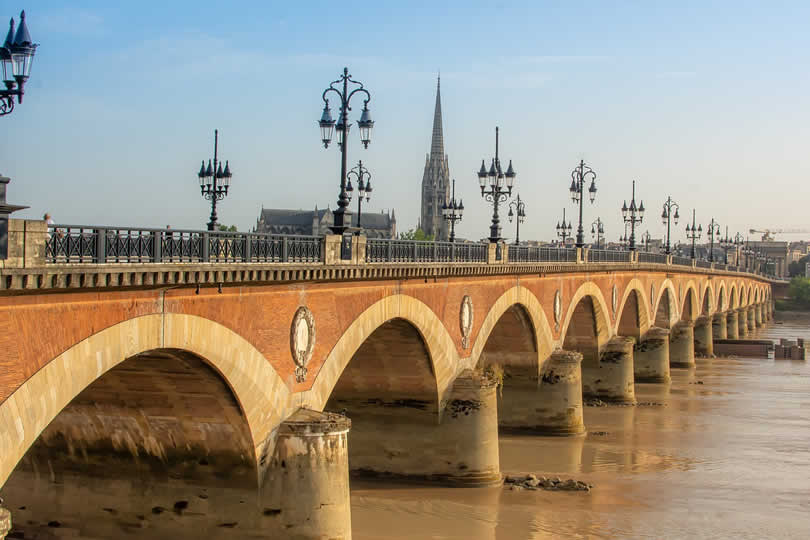 Garonne River and the Pont de pierre bridge in Bordeaux

The team plays in the French Ligue 1, sometimes referred to as Le Championnat. Bordeaux is one of the most popular football clubs in France.

Location — to the north of the city centre

From Gare St-Jean take bus 9 in the direction of Brandenburg, and get off at stop Stade Chaban-Delmas.

By Tram : From Bordeaux city centre you can get the Blue tram direct from Cours d’Alsace Lorraine, Place du Palais or Hotel de Ville.

Air Connections — The nearest airport is Aéroport de Bordeaux-Mérignac BOD, in the town of Mérignac, 12km or 7.5miles west of Bordeaux France.

The airport is served by British Airways from London Gatwick, Easyjet from London Luton and Bristol as well as flights from Birmingham BHX and Manchester Airport.