The Millennium or Principality Stadium is the home ground of Wales national rugby union team and the Wales national football team, located in CF10 1NS Cardiff Wales. It hosts also many other sporting and music events.

There is a wide choice of hotels , b&b’s, cheaper hostels and self catering apartments for rent within close distance of the football and rugby ground. Accommodation located right in the heart of Cardiff, some overlook the Principality stadium and Cardiff Castle. The Central Railway station is within walking distance of these properties.

4 Best Hotels Within Walking Distance of The Principality Stadium

3. The Angel Hotel- Part of the Cairn Collection ★★★

This luxury hotel is in the city centre,... read more

Situated between the Principality Stadium and Cardiff Castle,... read more

With a great location in Cardiff’s centre, Jurys... read more

In the waterfront area of Cardiff Bay’s old... read more

The Angel Hotel- Part of the Cairn Collection

In a prime city centre location, this 4-star... read more

With a stylish bar and restaurant, Clayton Hotel... read more

Located in the Cardiff Bay district in Cardiff,... read more

Boasting a restaurant, Castle view is set in... read more

Mr M Shen, a property with a garden,... read more

The Principality (Millennium) Stadium is the home ground of the Welsh rugby and football team. The Wales national rugby union team compete annually in the Six Nations Championship with England, France, Ireland, Italy and Scotland. They also compete in the Rugby World Cup every four years. The Principality Stadium replaced the National Stadium at Cardiff Arms Park.

The stadium was built for the 1999 Rugby World Cup. Construction of the Millennium Stadium began in 1997 and was completed in 1999, costing some £120 million it has paid for itself with sell out concerts as well as hosting Rugby Union, League and football internationals and club cups. The stadium was the first in the UK with a retractable roof and has a capacity of 74,500 seats.

It’s an UEFA 5 star stadium which means it has the capacity and facilities to host major European Finals. Among other 5 star stadiums include the Stade de France in Paris, the Ibrox Stadium in Glasgow, Amsterdam Arena, Old Trafford in Manchester, San Siro in Milan, the Veltins Arena in Gelsenkirchen, Camp Nou in Barcelona, and Estadio do Dragao in Porto.

During the reconstruction of Wembley Stadium (see hotels), the stadium hosted the FA Cup and League Cup finals as well as the FA Community Shield. 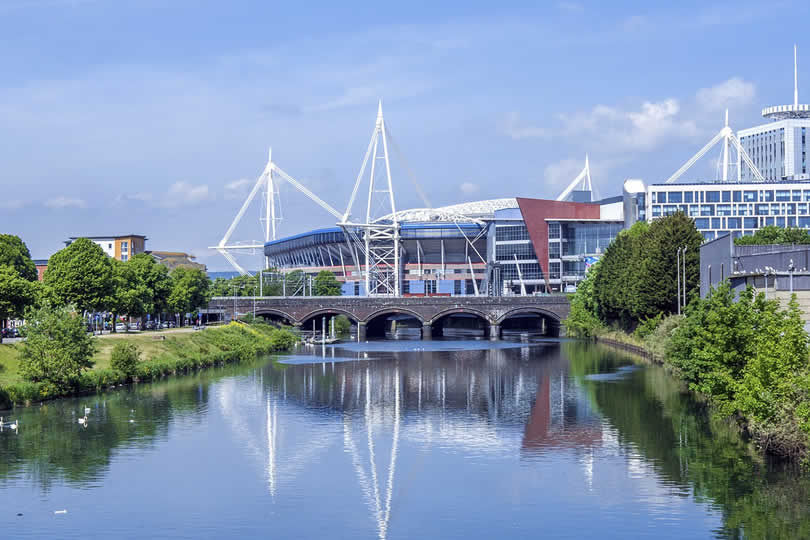 Website — Principality Stadium
Location of Stadium — the football and rugby ground is located in the center of Cardiff in CF10 1NS Wales.

You can access the Stadium by leaving the station’s main entrance on the Northern side and bearing left at the exit for Gates 5, 6 and 7 via Wood Street or by bearing straight ahead from the exit to Westgate Street for Gates 4, 3, 2 continuing around to Gate 1 on Castle Street.

By Car — the stadium and city centre of Cardiff can be reached by car from the M4 motorway. You can access the Millennium Stadium by Gate 4 on Westgate Street in Cardiff’s City Centre.

By Bus — Cardiff Central Bus Terminal is situated right next to the central train station.

Nearest Airport — the closest airport is Cardiff Wales airport, a 30 minutes drive from the stadium.

Bristol Airport is a 45 minute drive away from the Millennium stadium in Cardiff.