As a major global megacity which is well geered up for tourism, it’s not hard to find a hotel in Moscow, close to the Luzhniki Football Stadium for those visiting Russian’s biggest stadium. Despite being a notoriously expensive city, for the most part hotel prices in Russia are comparable to those for example in the UK, and luckily reflect prices outside of London rather than in it.

The more central you are in Moscow the pricier they will be of course. The Luzhniki Stadium however is located to the south-west of the city in the Khamovniki District, close to the Third Ring Road. The Khamovniki District is a well-heeled part of town full of Georgian houses and expensive boulevards but there a numerous hotels in this part of town that you can secure for a competitive price, provided you book early.

Offering panoramic views of the Moscow skyline, a... read more

This 3-star hotel in central Moscow is a... read more

Serpuhovskiy Dvor is set within a large business... read more

This hotel is located in the Spektr Business... read more

GorodOtel on Kievskiy is located in Kievsky Train... read more

Leninsky Apartments is set in the Gagarinsky district... read more

Attractively situated in the Khamovniki district of Moscow,... read more

The modern aparthotel is located opposite Kievsky Train... read more

Conveniently situated in the Donskoy district of Moscow,... read more

Located in Moscow, within 3.2 km of Luzhniki... read more

Ideally situated in the Dorogomilovo district of Moscow,... read more

Well situated in the Khamovniki district of Moscow,... read more

Offering air-conditioned rooms in the Khamovniki district of... read more

The City of Moscow

Moscow is a major global city and along with London, is one of the largest and most heavily populated in the upper northern hemisphere. It’s sprawling metropolis however doesn’t make life difficult for those visiting to watch the football, as the major sights are located within the city centre, a 30 minute metro journey from the Luzhniki Metro.

When you book your hotel check whether breakfast is included or whether you have to pay on top of the room price. Russian hotels can add a lot on to the bill without going through the prices with you first, so it’s good to know what is and what isn’t included from the offset. Russian hotel breakfast buffets can fill you up for the day and include an English style breakfast with added extras such as smoked fish and blinis.

The main attraction is the Red Square, home of the famous Saint Basil’s Cathedral, a stunning onion-domed church built in the 16th century. The Red Square is also the entrance to the 15th Century Kremlin, a huge complex of cathedrals, palaces and government buildings that were most famously the home of the KGB during Soviet Russia.

The best way to explore the Kremlin is with a guided tour. Also on the Red Square is the Mausoleum of Lenin, well worth a visit but there is heavy queues during summer.

Make a trip to Izmailovsky Flea Market, one of the biggest street markets in the city and the ideal place to buy a few sets of Matryoshka dolls for all the family back home.

The nightlife is good in Moscow and can be lots of fun, but it would be wise to stay out of trouble at all costs and stay in the main tourist haunts rather than going off and finding local bars. Avoid upsetting police or security staff. 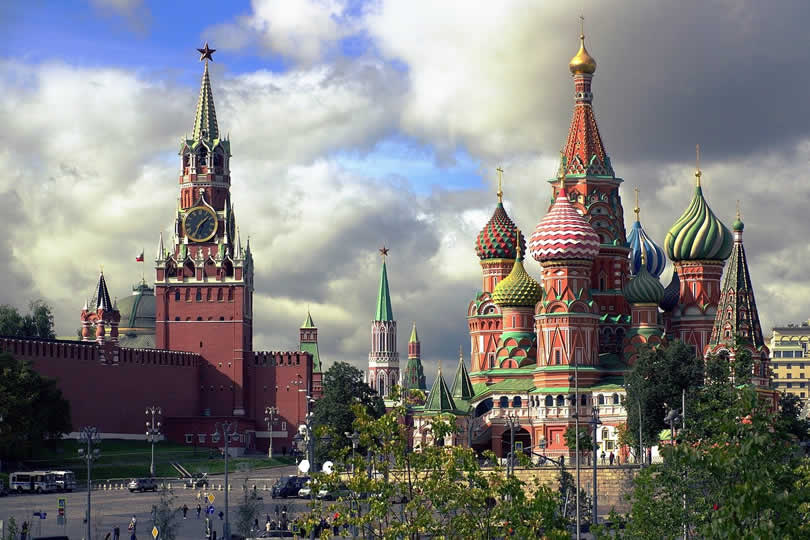 The location for the Luzhniki Stadium was chosen for it’s easy reach of the city centre and the fact that it was enveloped by green space. The first Luzhniki Stadium was built in the 1950’s during the Soviet era. This old stadium was largely taken down in 2013 and a newer one rebuilt in it’s place has been specially constructed ready for the World Cup.

Luzhniki, which now has a capacity of 81,000 up from 78,000, was selected as the venue for the World Cup Final 2018. Some old features have been kept including the roof and the facade, thanks to its architectural value.

For the first time, the venue now features a real grass pitch which is helped with artificial heat and lights, as harsh winters in Russia make natural pitches difficult to grow.

Security has been a major consideration for developers and stadium managers. Those arrived for the World Cup in 2018 had to pass through one of 10 security points and once inside the clean security zone crowds were dealt with via a ‘Total Security’ plan. With 22 exits in all and cascade stairs, the stadium can potentially empty in just 15 minutes after a game. A huge screen on the roof was displaying the game for those who are were unable to get tickets.

Club — no clubs based at the stadium, but used as one of the home grounds of the Russian national football team.

Location — Located approx. 6km or 3.7mi from the city center. The venue is set on the Luzhniki Sports Complex and can easily be reached by metro (underground).