The Nizhny Novgorod football stadium is situated not more than 3 kilometres from Nizhny’s historical centre and the Kremlin on the other part of Oka River and less than 2 kilometres from Moskovsky the main railway station on the same side of the river Oka.

Numerous hotels and other accommodation options are located within easy reach of the ground. Facilities offered might range from basic bed and storage space for clothing, to opulence features such as en-suite bathrooms. Bigger hotels may provide extra visitor facilities such as a business centre, swimming pool, childcare, social function services and conference facilities.

Oktyabrskaya Hotel is located on the high and... read more

This hotel stands on Lenin Square in Nizhny... read more

Located in Nizhny Novgorod’s centre near the Kremlin,... read more

In the historical area of Nizhniy Novgorod, this... read more

Just a 5-minute walk from the historic Pokrovskaya... read more

Overlooking the Oka River, this pet-friendly hotel in... read more

Offering a wellness area with a big spa... read more

This hotel in Nizhny Novgorod, on the high... read more

This modern hotel complex on the banks of... read more

A 5-minute walk from the Kremlin in Nizhny... read more

Fully-refurbished in August 2020, this 3-star hotel is... read more

Free Wi-Fi and a full English breakfast are... read more

Free Wi-Fi and a shared kitchen are featured... read more

This hotel is located 30 metres from Oka... read more

Located in the city centre of Nizhny Novgorod,... read more

Located a 10-minute walk from the Nizhny Novgorod... read more

Joy Hotel is located in the historic centre,... read more

Hotel Minin on Pozharskogo Street is situated in... read more

Right in the heart of Nizhny Novgorod, «Покровский... read more

Situated in the centre of Nizhny Novgorod, Seven... read more

The city of Nizhny

From 1932 to 1990, the metropolis was known as Gorky in respect of the renowned writer Maxim Gorky. Owing to its strategic position on the Volga River, Nizhny developed into one Russia’s leading trade centres during the 19th century. Nizhny Novgorod (or plainly Nizhny in as locals call it) is a big city in Russia, the headquarters of the Volga Federal District and Nizhegorodskaya oblast. It is a vital economic, cultural and transport hub.

This city smells of rivers. That may sound bizarre; however two big rivers – the Oka and the Volga – merge here. And if you go to Strelka – the name of the place at which the two rivers become one – you will get swept up in a moist breeze.

During spring the wind has a lilac smell, while in summer it has the whiff of smoke and manufacturing gas from the nearby industries. The Kremlin complex is nowadays the symbol of the capital – it is an illustration of Russian self-protective architecture, constructed in the 16th century to guard the locals, and thanks to it Nizhny Novgorod has been saved from copious incursions.

Today it is abode to administrative buildings, museums, and a working temple – it is like a town within a town. Its ancient church is the highest point of the city. 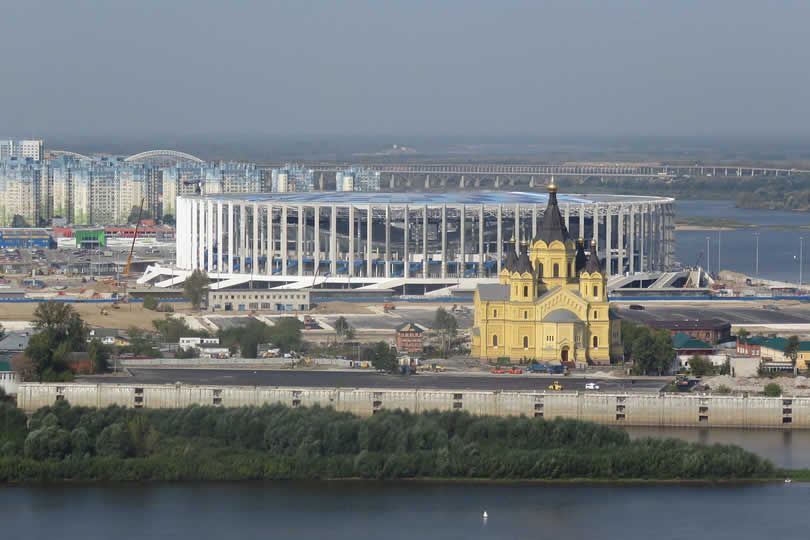 Hotel in the city are providing lodging payable on a temporary basis. Some cheap hotels near the ootball stadium provide something to eat as part of a room and board bargain. Operations in these hotels vary in size, function, and price. Many Nizhni Novgorod cheap hotels and key hospitality companies that run hotels in the city have set extensively acknowledged industry standards to categorize hotel types.

Small to medium-sized low-priced hotel properties only provide a very partial amount of on-site services and often just proffer basic housings with little services, these hotels usually exclusively cater and promote to a particular category of tourists, like the budget-minded tourist searching for a “no frills” housing.

Nizhni Novgorod cheap hotels often do not have an on-site restaurant however in return they may offer a controlled complimentary food and beverage service such as an on-site continental breakfast. When searching for low cost accommodation near to the football stadium, please choose the room type, the incorporated meals, and the most appropriate booking stipulations. An ideal cheap hotel room close to this venue is waiting for you.

This stadium has adequate room for around 45,000 fans, of which about nine hundred will be made accessible to those people with limited mobility in addition to their assistants. The spectators are seated in two rows, with the lower one being smaller than the upper one. The concept is that the stadium will have a whirling bowl design.

The Nizhny Novgorod Stadium is amongst the various Russian stadiums that have been constructed mainly for FIFA’S World Cup which will was held in the country during the summer of 2018. Distinct from the other arenas, the venue was not an old sports ground that was being rebuilt, but it was build up from scratch.

One thing to know about this stadium is that it’s the home ground of FC Olimpiyets Nizhny Novgorod after the World Cup was ended. The field hosted six games at the World Cup, as well as one of the Last 16 matches and one quarter-final.

Location — Located about 3km or 1.9mi from the city centre on the west bank of the river Volga. The main railway station can easily be reached.