Viking Line Terminal – Katajanokka — The Katajanokka Terminal is located at Katajanokka. It has a regular ferry connection to Stockholm Sweden and Tallinn. The terminal has a restaurant, kiosk, a money exchange, an ATM, luggage lockers, and the Viking Line service point.

Accommodation in Finland near Port of Helsinki Cruise & Ferry

The stylish property offers accommodation next to the... read more

This elegant hotel is next to Helsinki Central... read more

This waterfront hotel is only 5 minutes' walk... read more

This modern, eco-friendly hotel is in the Ruoholahti... read more

Directly across the street from Stockmann Department Store,... read more

This hotel is 200 metres from Helsinki Central... read more

Located by the waterfront of Katajanokka, Scandic Grand... read more

Located on Helsinki’s Katajanokka island, this hostel is... read more

Situated directly across from Forum Shopping Centre is... read more

This central hotel is across the street from... read more

Situated in the Kamppi district of Helsinki, Forenom... read more

These apartments are located in the Kruununhaka district... read more

Featuring a quiet courtyard and views of the... read more

This unique boutique hotel is located just next... read more

Lapland Hotels Bulevardi in Helsinki has a bar... read more

Located in the centre of Helsinki, just 200... read more

This elegant hotel is housed in a building... read more

Well situated in the centre of Helsinki, Aikatalo... read more

2ndhomes Stylish studio in the middle of the City Center

Some great value places to stay nearby

The Historical Katajanokka prison from 1837 has been transformed into an ultramodern luxurious hotel surrounded by lush parklands, walking distance from Helsinki’s city centre.

Located in the heart of Helsinki, the Palace Hotel is an intimate first class hotel, having established over 40 years of tradition in serving international guests in an elegant atmosphere.

Helsinki is the capital and largest city in Finland. The city is located on the shore of the Gulf of Finland, an arm of the Baltic Sea. Find your hotel, b&b or guest house beside the cruise and ferry terminals. Stay nearby Tallink Silja Ferries, Viking Line Ferries,
Finnlines Ferry. Book online and save money. 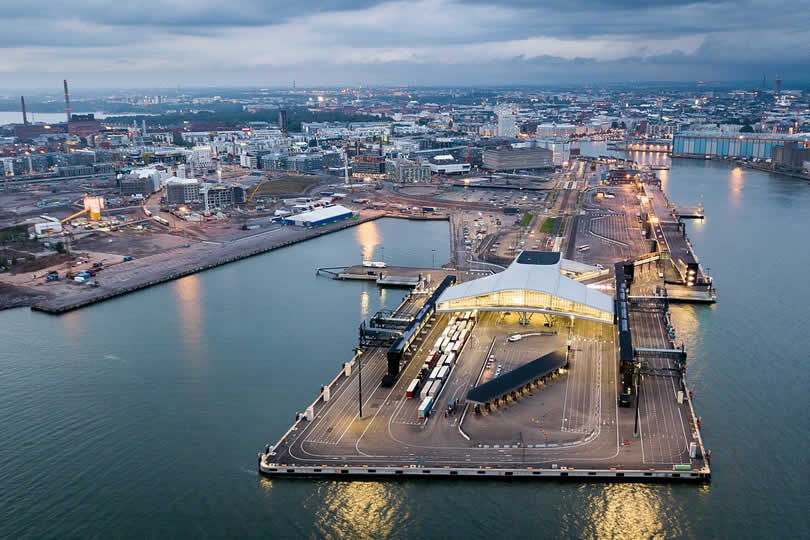 Port of Helsinki in Finland

Viking Line : Cruise the world’s largest archipelago between Finland and Sweden with the luxurious and spacious Viking Line cruise ships between Helsinki and Stockholm city centre. Or combine two Baltic capitals – Helsinki and Tallinn.
The new Viking XPRS offers you the best qualities of conventional car ferries and catamarans, combining comfort, on-board service and reliability with short crossing times in all weather conditions. It is a modern ship that has been customised to the last detail for the Helsinki–Tallinn route. Fast, fun and friendly!

West Terminal : The West Terminal is located at the West Harbour and it concentrates on traffic to Tallinn. There are several daily departures to Tallinn. The terminal has luggage lockers, a trolley rental, a restaurant, café, kiosk, bank, an ATM and the Eckerö Line and Tallink Silja Oy service points.

Tallink Silja Line operates 7 routes with a fleet of 18 ships. Onboard our luxurious vessels you can reach all main sea ports and capitals of Northen part of Baltic Sea.

They connect Europe with Finland! Choose the route which suits your the best! Cruise from Helsinki to Turku, Aland, Stockholm, Tallinn, Riga or Rostock and enjoy both onboard services and the beautiful destinations.

Viking Line’s luxury ships sail every day from Finland to Sweden and Estonia (Tallinn). The Åland Islands (Finland) are accessible from both Turku (oldest city of Finland) and Helsinki on the Finnish mainland and Stockholm, Sweden.

Which Region to Visit ?