La Sagrada Familia in Barcelona is one of Gaudí’s most impressive works. This enormous church, as yet unfinished, is in some respect a summary of everything that Gaudí designed before, because the structural difficulties he faced and errors he committed in other projects are revisited and resolved here.

Several hotels and apartments are located within easy walking distance of the Cathedral. Some of the best properties are listed below.

Accommodation in Spain near Gaudi Cathedral

SM Hotel Teatre Auditori is located opposite the... read more

This design hotel offers free WiFi and is... read more

The Acta Antibes is set in Barcelona’s Eixample... read more

Hostal Felipe 2 is located in a Modernista... read more

This classically decorated guest house is set in... read more

This design guest house has an excellent location... read more

Located within a 5-minute walk of Monumental and... read more

Grande and Authentic in Eixample with central AC, mosaic

In a central area of Barcelona, located within... read more

La Sagrada Familia is a striking example of Gaudi’s unique Art Nouveau architecture and is filled with religious symbolism and meaning. Eight of the intended twelve towers have been built, which rise to over 100 meters. These represent the Twelve Apostles and each one bears the name and statue of its apostle.

Gaudi also intended to add a 180-meter tower in the center, topped with a lamb representing Jesus. This will be surrounded by four shorter towers representing the Four Evangelists, topped with their animal symbols. A still shorter tower will represent the Virgin Mary. The height of the tallest tower is to be one meter less than the nearby hill, Montjuic, as Gaudi believed his work should not surpass that of God.

The pinnacles of the towers are decorated with colorful mosaics and some are embedded with the words “Excelsis” and “Hosanna.”

The basilica has three facades, which are also filled with precise symbolism: the Passion Facade on the west; the Nativity Facade on the east; and the Glory Facade on the south. Each facade has three portals representing the virtues of Faith, Hope and Love. 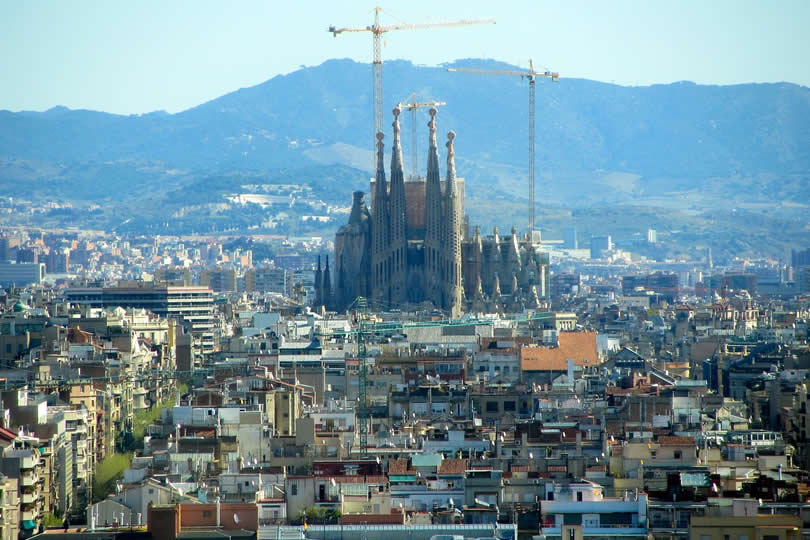