The city of Saint Petersburg is a worderful place with a proud culture and historical heritage. The city centre is also listed in the UNESCO World Heritage Site which is not surprising with its spectacular range of museums, parks and unmatched architecture.

For those fans heading to Russia’s Crown Jewel of the North, there is no shortage of hotels, hostels and apartment for rent to choose from. The city is more than geared up to accommodate supporters and guests of a football game.

Check out below some of the best hotels near the Gazprom Arena (Krestovsky Stadium), home ground of FC Zenit Saint Petersburg football club.

Accommodation in Russia near Gazprom Arena

Enjoying views over the Gulf of Finland and... read more

Le Vashoff Hotel is located in the heart... read more

The renovated Hotel Alfavit is conveniently located in... read more

Troyka is located in Saint Petersburg, a 12-minute... read more

Offering an indoor pool and a fitness centre,... read more

Hotel Luko is located in Saint Petersburg on... read more

MFK Gorniy is situated in Saint Petersburg, within... read more

Parklane Resort and SPA is situated in Saint... read more

House in Lahta is a holiday home with... read more

Situated within the Petrogradskiy district in Saint Petersburg,... read more

Fortune Inn is located in Saint Petersburg, within... read more

Set within the Petrogradskiy district in Saint Petersburg,... read more

Set in Saint Petersburg and with Gazprom Arena... read more

Boasting a shared lounge and a garden, Gardens... read more

Located within 600 metres of Chapel of St.... read more

Featuring a garden, terrace and views of river,... read more

Crown Jewel of the North

Saint Petersburg is a city known for its strong football culture so much so it was represented on the 2018 FIFA World Cup Russia poster. Russia’s Crown Jewel of the North has inspired poets, musicians, writers and artists so is the perfect setting for this spectacular sporting event.

St Petersburg is Russia’s second largest city, a football-mad city with a population of around five million. Getting to and from the venue from your hotel room will be easy. The city has good transport links with multiple public transport vehicles which include buses, trolley buses and the underground.

If you’re planning to watch a match in the Krestovsky stadium (called Saint Petersburg stadium during the World Cup tournament) it’s probably a good idea to book your accommodation now. Expect room availability to be quickly snapped up and hotel rates to increase as a big match gets closer. 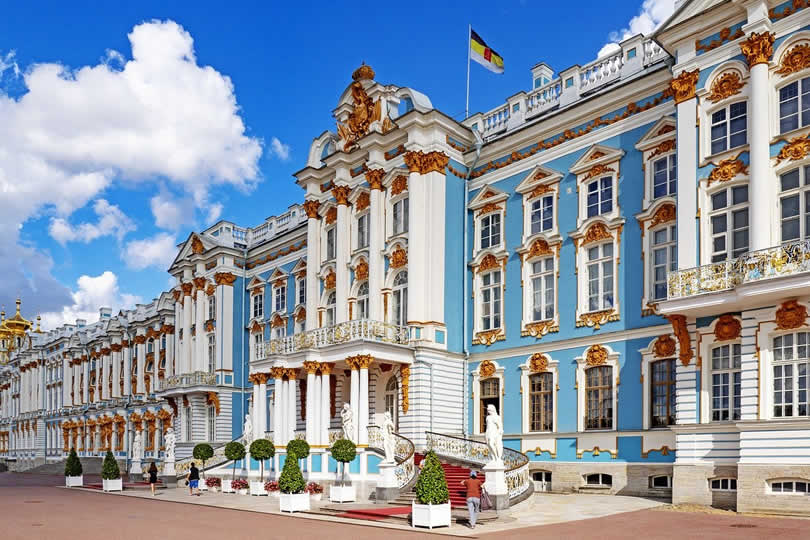 The Krestovsky stadium of Zenit football club has been designed by the architecture firm Kisho Kurokawa, and seems to resemble the shape of a spaceship with the roof being held up by four masts. Four first round group matches were played here, a quarter final, a semi final and then the match for third place.

It has taken around ten years to complete the arena in time for the 2018 World Cup Football. The venue was also one of the four stadiums in use for the 2017 FIFA Confederation’s Cup. Krestovsky Stadium, finally completed in early 2017, is one of the world’s most expensive football grounds. It has excellent facilities and is a fitting venue to host the opening games. With a capacity of 68,134 seats it’s also now the largest active football stadium in the Russian Premier League.

Hotels and other cheap properties across the city are getting fully booked quickly for the influx of supporters when Zenit is playing an important European football match . As you would expect, Russia was a hot spot travel destination since the World Cup of 2018. Find out more about different accommodation options before reserving your flight.

Along with arranging budget friendly properties, it’s probably a good idea to buy match tickets in advance. With this in mind, check out package deals online which often include flights, accommodation and tickets.

Search online to benefit from budget accommodation whether you’re travelling with family and friends or as a group of supporters. Making a reservation sooner rather than later will guarantee you a room and give you peace of mind that your reservation is secure in plenty of time to watch your favourite playing against Zenit Saint Petersburg in Russia.

Club — FC Zenit Saint Petersburg, which are the highest ranking Russian club in the UEFA Club Coefficients above the likes of Manchester United and Tottenham.

Location — Located on Krestovsky Island in the north-west of the city. The venue can also be reached by metro and bus.

Air Connections — nearest airport is Pulkovo International Airport, about 20km or 12mi from the city centre.