Where to Stay in Ghent Belgium ? 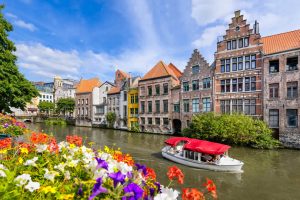 Though not so popular, Ghent continues to grow as a tourist destination in Belgium due to its medieval structures and a vibrant nightlife. This city located between river Schelde and Leie is one of the large cities in Belgium and the largest in the East Flanders province.

Most of the tourist attractions such as the Christmas market, the Gravensteen castle and St Bravo’s Cathedral are mostly concentrated in the city centre. The city streets are highly accessible, and the best way to tour the city is on foot through the impressive sidewalks from where you can admire the city’s medieval architecture and enjoy the fresh sea breeze.

What’s the best area to experience the city for the first time, tourists, what’s the best district for nightlife, or where to stay on a budget or romantic trip ? Read on below to find out more best neighbourhoods to stay in Ghent Belgium.

What is the Best Area to Stay in Ghent ?

Gent city centre is small but yet accessible by all means such as on foot, by train, bicycles and public transport. The city centre rewards with a beautiful view of attractive historic buildings such as the medieval castle of Gravensteen and other attractions such as the St Bravo cathedral and the Christmas market if you are lucky to visit the city in December. Most of these attractions are within the city centre, meaning the distances can be covered on foot.

Where to Stay in Ghent City Centre

Best Areas to Stay in Ghent

Best places to stay in Ghent for romantic holiday ? Bed and Breakfast or Boutique or Luxury Hotel

Bed and breakfast accommodations in Ghent are one of the best places to stay for couples. Most of them are classic and stylish and are all over so you can choose the one in a location that best suits you. You don’t compromise comfort because the rooms offer the same. Another option is a small Boutique hotel or luxury hotel that can add some fun activities such as hikes and bike riding trips for couples. The fun you get will depend on the facility you choose as they offer varying services and fun activities depending on your budget.

Stay in one of Ghent’s oldest neighbourhoods ?  Patershol (Gravensteen Castle)

Patershol is a beautiful part of the city with most of its architecture dating back to the middle ages. The Picturesque streets are a must-visit for food funs due to the huge presence of cosy hotels, trendy bars and pubs. Here you will have the opportunity to experience foods local foods and also from all over the world. The wide variety includes Japanese, Turkish, Italian and Spanish restaurants to choose from. You can also choose from different restaurant styles such as modern, classic, exclusive or traditional depending on your preferences. Gravensteen Castle is located in this area.

One reason why Ghent has the best nightlife is the high number of student in the city. The atmosphere at night is also lively, and the music will always impress you. Overpoort is the student’s night-time meeting place, and you can party there for a whole night. The street is located in the Student district and has more than 35 cafés with close proximity. De Vlasmarkt, on the other hand, is a perfect choice for those interested in trendy clubs and dance pubs.

Where to stay in Ghent on a budget ? Sint-Pieters Railway Station, Ledeberg

The best place to stay when visiting Ghent on a budget is the Ledeberg neighbourhood or around the main train station. Ledeberg is located in the area south of the Ghent. There is a nearby university, and most of the population is younger meaning that the accommodation and entertainment are cheaper than other regions or district. You only need to walk thirty minutes to get to the city centre from this neighbourhood, but you can also use the regular trams that will take less time.

The 4 Best Neighbourhoods in Ghent (Gent) for Tourists

Gent is among the few cities with the “Creative City of Music “title given by UNESCO in 2009. Music in Ghent is diverse in terms of genre and genre, plus there are a lot of performance platforms for artists. The spirit of cooperation and interaction between the local musicians increases the popularity of the music. Some of the music festivals you can enjoy in gent include the ten-day city festival, the International Festival of Flanders Ghent for classical music lovers and the Gent Jazz Festival.

If you are interested in touring the city’s neighbourhood, you can start with Patershol village next to the Castle of the Counts. Patershol is a picturesque village boasting of well-built medieval alleys and street patterns. The town is also full of restaurants, cafes and galleries where one can meet and interact with the locals. Want to know where the rich live in gent? Go to Milijoenenkwartier neighbourhood. This area distinguishes itself from the rest of the city with luxurious mansions depicting a prestige contest between architects. Paul de Smet de Naeyer Park in the neighbourhood is a perfect picnic spot where you can relax after the long walk.

Sint-Pitetersnieuwstraat neighbourhood is where you can experience most of Ghent’s art culture such as film screening, dance classes and concerts. The street is among the oldest in gent but has attracted a lot of urban due to the huge presence of student pubs and budget hostels full of backpackers.

The best area for tourists is the city centre owing to its huge concentration of attraction sites. The sites include the medieval buildings, the Castle at Gravensteen, The docks of Graslei as well as the museums.

Tourists with a few days to spend in Ghent can stay in the city centre because most attractions will be a walking distance away from their accommodation. There are also a lot of hotels and other budget-friendly accommodations, making it easier to find a place.

Elisabethbegijnholf area is also favourable for tourists due to its proximity to the historical city centre. Most of the attractions, such as the medieval castle of Gravensteen, are a walking distance away.

The area is also full of restaurants, hotels and B&B accommodations with different classes from budget to luxurious.

The Sluizeken-Tolhuis-Ham district is an area full of budget accommodation and is close to major places of interest such as the graffiti street.

This area is busy at daytime, but there is no so much nightlife, though you can find a few pubs. Here you will also interact with the locals from the nearby apartments, mostly on the streets.

This area is the best for rail transport lovers. It is a fine spot for tourists from around Europe due to easy connections. The area is also full of shops and cafes plus you can use the trams to other Districts of Ghent.

Living near the train station will make it more convenient to leave if you wish to use a train when unlike when you have to connect from other areas such as Antwerp Central Station or Brussels South Station hotels.

Where to Stay in Belgium ?

Popular in / near Ghent, Belgium

Book Best Hotels in Ghent
Scroll to top
By continuing to browse this site, you are agreeing to the use of cookies, whose purpose it is to provide web analytics and measurements of visitor traffic and browsing behavior. Find out more.