Where to Stay in Warsaw Poland ? 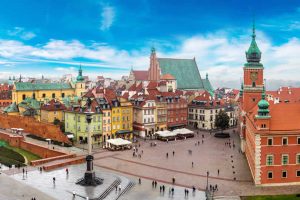 Warsaw didn’t always receive the attention it deserved, usually falling in the shadows of other cities like Krakow, Gdansk and Wroclaw. In recent years, the capital city of Poland gained high praise as a top tourist destination in Eastern Europe.

Warsaw offers plenty to see across the different districts and perfect weather for the summer holidays. For accommodation, the city has an impressive variety. Warsaw is Poland’s largest city and is not very compact, so settling on a place to stay can be a bit of a challenge.

Fortunately, it has an extensive public transport system that you can use to visit various attractions. A decent number of hotels are available with options ranging from luxurious five-star accommodation to budget stays. B&Bs and hostels are other choices you have around the capital city. For tourists on extended stays in the area, apartments are a practical alternative.

What’s the best area to experience the city for the first time, tourists, what’s the best district when on business trip, or where to stay on a budget or nightlife? Read on below to find out more best neighbourhoods to stay and to suit varying requirements in Warsaw Poland.

What is the Best Area to Stay in Warsaw ?

If you are in Warsaw for the first time, Śródmieście District is the perfect place to stay. It’s smack in the heart of the city and consists of the Old Town and New Town. This section of Warsaw is the cultural, financial and cultural hub. For this reason, it’s the best connected in terms of transportation. The Old Town provides some of the best scenery in all of Warsaw. Visit the historical monuments to learn about the heritage of the region. Some attractions to see include Sigismund’s Column, Presidential Palace, Royal Castle, and the Palace of Culture and Science.

Where to Stay in Warsaw City Centre

For a romantic getaway, you want a place where you can create beautiful and lifelong memories. Old Town is it. Kamienne Schodki, which is the Stone Steps street, is ideal for strolls with your significant other. Take evening walks around the Market Square and stop at the Warsaw Mermaid for a kiss. For those awe-inspiring candid shots, Gdański bridge along the Vistula River doesn’t disappoint. Besides Old Town, Praga is another place to go for a romantic holiday. Picture walking on the shore in Praga Beach as you watch the sunset. For a charming place to stay you opt for a bed and breakfast or small boutique hotel. Luxury 5 star hotels await you with presidential suites, fine dining and splendour.

Looking to enjoy the best of nightlife that Warsaw has to offer? Stay within Centrum. Kredytowa, Nowogrodzka and Parkingowa streets are some places to start. The area has everything from classy wine bars to vibrant cocktail bars and everything in between. Here, you will find bars where you have to duck behind busy alleyways to rooftop settings with gorgeous views of the nighttime sky. Whatever your scene, you are bound to find it in this part of Srodmiescie.

Best Area to Stay when on Business Trip: Wola or Mokotów

Wola was originally an industrial bit now is home to numerous multi-national organisations, which is why it’s perfect for business. It has excellent transportation. Shopping, fitness centres and restaurants line the streets up and down, offering unmatched convenience. Mokotów is another financial and commercial centre. The district is Warsaw’s most populous and, therefore, has plenty of choice in accommodation. The National Museum and Warsaw Uprising Museum are some places to visit while here.

Where to Stay in Warsaw on a Budget: Praga Poludnie or Praga Pólnoc

The art centre of Warsaw, Praga is, also the best for budget trips. The district lies on River Vistula’s right side and is divided into two – Praga Pólnoc and Praga Poludnie. The North, Pólnoc is growing into a favourite for artists, with ateliers and galleries lining the streets. To the south, Poludnie, you have residential properties and decent dining establishments. The zoo, Praski Park and Skaryszewski Park are examples of places to visit in Praga.

The 4 Best Locations in Warsaw for Tourists

Warsaw has 18 districts, each one suitable for certain needs. Old Town, which is in Śródmieście, is one of the city’s most popular tourist spots. It’s a charming place with a long list of attractions.

The northern downtown part of Warsaw is where most of the accommodation is. It includes the region between the Central Train Station and Old Town. This area is where you will find some iconic attractions like the Presidential Palace and the Palace of Culture and Science.

If you wish to stay away from the busy city centre, downtown south is an excellent idea. Even though it’s part of the capital, it has a more serene environment. New Town is almost as interesting as Old Town, but it doesn’t have the convenience of a well-linked transport system.

Mirow is another neighbourhood to consider when you want access to Warsaw’s downtown. You will find a majority of the major hotels in this section.

Come for the marvellous attractions, stay for the culture. Old Town, or Stare Miasto, was destroyed during WWII after consecutive bombings. Since then, the city rebuilt, but some aspects of the pre-nazi era remain like the old walls. Old Town is colourful, charming and unforgettable, three main reasons to have it in your itinerary.

Pedestrian streets line the area from one end to the other with restaurants, shopping stalls and bars spread out across them. The attractions are only one reason it’s a UNESCO World Heritage Site.

The neighbourhood of New Town is ideal for tourists who want proximity to the city centre. New Town is almost twice the size of Old Town, and so has a broad selection of accommodation options ranging from hotels to apartment rentals.

Visit Marie Curie’s birthplace, several abbey churches and the statue of Klemens Maria Hofbauer. New Town survived massive destruction as well and underwent reconstruction. See some ruins of the former Warsaw ghetto as you stroll down the streets.

If you don’t mind a busy neighbourhood while enjoying your holiday, Ochota is a decent alternative. The district is fashionable, well-connected and convenient. It’s not far from the city centre and provides extensive rental options.

The area is largely residential, which makes it perfect when holidaying with family. Its great transport links mean that you can go back and forth to various parts of the capital without too much trouble.

To the west of Srodmiescie lies Wola, a bustling district with skyscrapers stretching across the horizons. If you prefer to rent an apartment to stay while visiting Warsaw, Wola is the best place to look.

The district is designed for business. Therefore if you are considering investing in the city or your trip is partly about business, Wola is worth the time. The Visit the Warsaw Uprising Museum and learn about the Varsovians war efforts.

Warszawa Centralna, the central station, makes sense because it gives you was access to the city. The Polish capital covers 517.24 square kilometres in city limits with the metropolitan spread on 6,100.43 square kilometres.

The railway system ensures that you can navigate from one district to another. Warsaw Central Train Station is in Śródmieście, so you can get to Old Town and New Town easily.

Popular in / near Warsaw, Poland

Book Best Hotels in Warsaw
Scroll to top
By continuing to browse this site, you are agreeing to the use of cookies, whose purpose it is to provide web analytics and measurements of visitor traffic and browsing behavior. Find out more.