Set in the valley of the Guadalquivir river, the Andalusian capital of Seville has long captivated the imagination of wanderers with its cultural charm and rich architectural heritage. The resplendent capital is located in the south of Spain, where its Gothic Catedral de Sevilla, Mudéjar palaces, and charmingly narrow streets number among its many local treasures.

Experience the birthplace of flamenco and discover the bestof Seville by staying in the city’s best hotels such as the Hotel Alfonso XIII and the Hotel Palacio De Villapanés. Savour the local ambiance of the gem of southern Spain through a more intimate stay at one of its best boutique hotels, the Hotel Mercer Sevilla.

Find everything you need to know about staying and exploring Seville, Spain – the best sights to see, the perfect hotels for families, the best rooms with a pool, a view, or both – in our detailed travel guide.

What are The Best Hotels in Seville City Centre & Old Town ?

Centrally located by the Catedral de Sevilla and Real Alcázar, Hotel Alfonso XIII itself counts as a cultural icon in Seville. The luxury hotel, commissioned by the King of Spain, has hosted an impressive collection of international dignitaries since its 1928 inauguration. Standing in the historic Barrio Santa Cruz, Hotel Alfonso XIII flaunts an impressively detailed architecture and a remarkable interior showcasing the best of Andalusian heritage and Sevillan style. This exceptional feat of architecture and design, coupled with luxe rooms and suites also brandishes impeccable service and a sweeping set of views, easily earning its place as the best hotel in Seville, Spain.

Set in the heart of Seville’s city centre, the five-star Gran Meliá Colon is among the best hotels the Andalusian capital has to offer. The opulent hotel distinguishes itself from other luxury hotels in Seville with its confident contemporary aesthetic and modern interior filled with furnishings by renowned designers such as Starck, Wanders and Edra. Contemporary design notes richly contrast the building’s more classical tones of baroque and marble, producing a sophisticated marriage for the senses. Stylish minimalism is the theme of the hotel’s guest rooms and suites, decorated in hues of red and gold, while ‘red glove service’ is the name of Gran Meliá Colon’s hospitality concept – infusing the white glove standard with a red carpet flair.

A mere 11-minute walk away from the Catedral de Sevilla, Hotel Bécquer counts among the best value hotels in Seville, Spain not just in location, but also because of its personalized service and focus on comfort. Featuring 134 fully-equipped guestrooms, a range of free services, a thrilling rooftop swimming pool and solarium with breathtaking views of the cathedral, guests have consistently rated Hotel Bécquer as a great value for money accommodation in the city and one of the finest hotels in Seville, Spain.

Located a stone’s throw away from La Giralda, the delightful Hotel Casa 1800 Sevilla effortlessly ranks among the top rated hotels in the city. Set in a 19th-century mansion in the heart of old town, the hotel has retained all its traditional charm and character with a beautiful courtyard and unique interiors still featuring original architectural details, such as wooden windows and ceilings – a rare accomplishment for most revived hotels. Each of the hotel’s 33 bedrooms is also fully-equipped to ensure the most comfortable stay for guests and features one-of-a-kind furniture, adding to the simple splendour of Hotel Casa 1800 Sevilla.

Exuding contemporary cool and effortless luxury, the unabashedly modern Hotel Rey Alfonso X sits confidently at the heart of the idyllic Barrio Santa Cruz, ranking among the greatest value hotels in Seville, Spain. Stylishly decorated rooms combined with first-rate service, modern facilities and views of the Seville skyline from its breathtaking terrace and rooftop pool award Hotel Rey Alfonso X a comfortable place among the optimum hotels in the capital. A few minutes’ walk will take guests directly to landmarks such as La Giralda, and the Real Alcázar de Sevilla.

Located right by the Guadalquivir river on La Cartuja island is the truly impressive Eurostars Torre Sevilla, a skyscraper featuring 257 fully-equipped modern rooms, top-of-the-line facilities and first-class service. Unlike other hotels in the area, the Eurostars Torre Sevilla is situated within a modern architectural icon in southern Spain: Argentinian architect Cesar Pelli’s spherical monument and Andalusia’s tallest building, the Seville Tower. As such, the Eurostars Torre Sevilla offers unrivalled in the 360-degrees panoramic city views and, coupled with the hotel’s state-of-the-art amenities and first-class service classifies it among Seville’s best hotels.

What are The Best Boutique Hotels in Seville Spain ?

Primely positioned near the iconic La Maestranza bullring, the innovative Hotel Mercer Sevilla infuses Andalusian heritage with a contemporary flair in this charming 19th-century palace. Among the newer collection of hotels in the region, the Hotel Mercer Sevilla sets itself apart with its commitment to excellent service, delivering a more intimate luxury experience of Seville, and providing guests with first-rate amenities in a more personalised setting. The hotel boasts a rooftop terrace with a solarium, pool and pool bar service, and celebrates the best of southern Spain’s produce and gastronomic culture in its María Luisa restaurant.

Local heritage and modern comforts meet in this refined boutique hotel, set in an early 20th-century palace situated in the picturesque Calle Gravina in the heart of Seville’s old town. Moorish accents seamlessly play with baroque elements and traditional Andalusian design in Hotel Gravina 51, which features spacious rooms and residences. Guests can expect a range of top-quality services from this intimate boutique outfit, and can readily enjoy the best of the city from its doorstep, with tourist draws Real Alcázar and Catedral de Seville less than a kilometre away.

Set in a large 17th-century mansion awash in gold and earth tones, Hotel Casa Del Poeta stands apart from other luxury boutique hotels in Seville, Spain with its distinctive southern warmth. Featuring impeccably maintained architectural and decorative details, the hotel retains the mansion’s original Sevillano style, with residential and guest areas surrounding an arcaded patio and its central fountain the focal point of the home. Tucked within a narrow, picturesque lane in Barrio Santa Cruz, the innominate hotel is Seville’s (not so) well-kept secret: a splendidly intimate outfit with only 18 rooms that flaunts sophisticated interiors, exquisite style and character, and a service with such attention to detail, it rivals the best hotels in southern Spain.

Anchored in the heart of Barrio Triana, Zenit Sevilla is the idyllic base for travelers looking to dive into the cultural textures of Seville Spain. Guests can look forward to an intoxicating mix of local Sevillano flavor and lively urban scenes in the Mercado de Triana, near the Puente de Isabel II bridge, mere steps away from Zenit Sevilla. Travellers preferring hotels where they can make the most of Spain’s sun and temperate climate will enjoy the seasonal rooftop pool and bar which offer breathtaking views of the capital. 128 rooms equipped with the best of modern comforts and high-quality furnishings guarantee a pleasant stay for guests seeking to discover authentic Seville in one of the Andalusia’s outstanding hotels.

What’s the Best Cheap or Affordable Hotel in Seville ?

Located just a stone throw’s away from Seville’s iconic Plaza del Triunfo, the stylishly sleek Welldone Antiquarium takes pride in its impeccable standards for quality and service, earning its place as the best affordable hotel in the city. Modern minimalism reigns as the hotel’s principal theme, with fully-equipped rooms exuding contemporary simplicity in its clean lines, modern furnishings and quality amenities. Welldone Antiquarium’s prime location and focus on comfort, value and quality ranks it among the best hotels in Seville, Spain for guests that hold both style and affordability in high regard.

One of southern Spain’s crowning jewels, Seville’s Centro is host to a generous collection of cultural and historical landmarks that pay tribute to the city’s rich heritage. See the city’s trinity of world heritage sites – the Catedral de Seville, Archivo General de Indias and the Plaza de Alcázar – in the Plaza Nueva, bordering the edge of Barrio Santa Cruz. Head north towards Plaza de Encarnación to savour scintillating views of the capital from Jürgen Mayer’s famous Las Setas de Sevilla. If you need to take a break from a day of travel, explore the Sierpes, Cuna, Velazquez/Tetuan shopping areas at your own pace to discover the best local products and handicrafts from southern Spain.

Get to know the beating heart of Seville by strolling down the charming lanes and beautifully white-washed little streets of Old Town, where hidden cafes and delightful local stores are just waiting to be discovered. Bask in the fragrant ambiance of Seville orange trees as you wander around winding alleyways to discover palaces and mansions flaunting a fusion of Moorish and Andalusian architecture such as Casa de Pilatos, Palacio de la Condesa de Lebrija, and the beautiful Plaza de Cabildo. Once Spain’s Jewish quarter, Old Town is now home to a number of the city’s most famous UNESCO landmarks including La Giralda, Catedral de Seville, and Plaza de Alcázar.

Some of the Finest Hotels in Old Town area

What are the Top Rated Hotels in Plaza de España neighbourhood ?

Built in 1928 by Spanish architect Aníbal González Álvarez-Ossorio, Plaza de España is situated within the picturesque Parque de María Luisa in Seville, Spain. Mixing design elements from the Renaissance Revival with Art Deco, Baroque and Neo-Mudejár styles of Spanish architecture, the square is a prime example of Regionalism Architecture and a testament to the city’s rich cultural heritage. The extravagant complex itself is constructed in a broad, sweeping crescent flanked by an array of buildings running around its edge, accessible over the moat by a series of bridges built to represent Castile, Navarre, Aragón and Léon – the ancient kingdoms of Spain. 48 intricately tiled pavilions representing the provinces of Spain line the plaza walls, and at the heart of it all stands the sensational fountain by Vicente Traver.

Widely regarded as the most beautiful park in Seville, Spain and one of Europe’s finest, the 100-acre Parque de Maria Luisa spans along the Guadalquivir river – a sweeping oasis for plants and wildlife. Consisting predominantly of a series of gardens from the Palace of San Telmo, the Parque de Marie Luisa was redesigned in 1911 by Jean-Claude Nicolas and underwent further improvements in 1914 as part of Aníbal González Álvarez-Ossorio’s preparation for the 1929 Ibero-American exposition. Take an afternoon break in one of the park’s benches or a leisurely stroll along the paths to see many of its intricately-tiled fountains, pavilions and ponds.

What are the Best Hotels in Giralda Bell Tower / Royal Alcazar Palace area ? 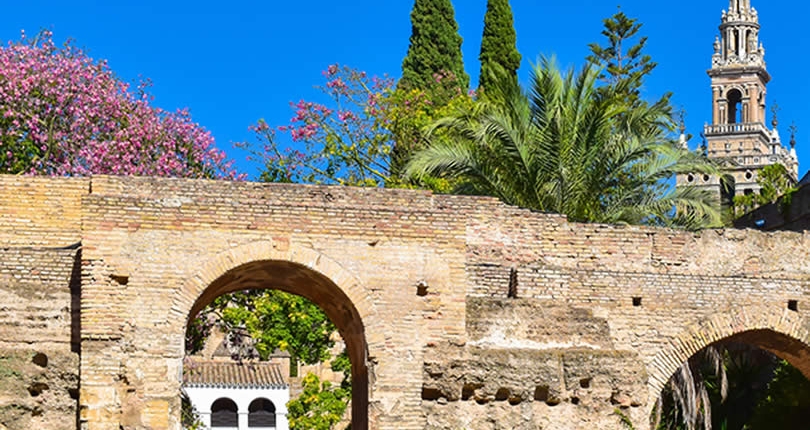 Perhaps the city’s most iconic attractions, La Giralda and Real Alcázar are among the cardinal landmarks to see during a quintessential trip to the Andalusian capital. Popularly known as the historic Catedral de Seville’s bell tower, La Giralda was originally built during the reign of the Almohad dynasty, as a minaret for Moorish Spain’s Great Mosque of Seville. La Giralda was refashioned and incorporated as the bell tower under architect Hernán Ruiz the Younger in the 16th century, following the mosque’s conversion to a cathedral.
The majestic Real Alcázar de Sevilla traces its earliest incarnations as a 1st century collegium, upon which St. Vincent’s basilica was built upon. The conquest of Seville in 712 marked the preliminary phases of the site’s transformation into its present form: starting out as a military structure and government premises, it was further expanded with the addition of al-Mubarak, “The Blessed”. This new palace quickly became Seville’s official and cultural centre, with more structures added to the growing palatial grounds under the Almohads. Following the Reconquista, the site assumed the role of Royal Residence and saw the introduction of the rest of the palace’s architecture and its most flamboyant features under Castile rule. 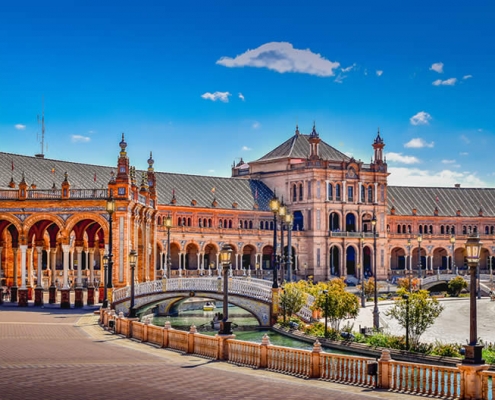 Popular in / near Seville, Spain

The Best Accommodation in Spain

Book Best Hotels in Seville
Scroll to top
By continuing to browse this site, you are agreeing to the use of cookies, whose purpose it is to provide web analytics and measurements of visitor traffic and browsing behavior. Find out more.