The Stockholm Marathon, an annual event which is being held in the city since 1979,
is about to take place on June 03rd 2023. More than 21,500 runners from all over
the world compete in this event as hundreds of thousands of audience cheer
them along the course.

From economic bed-and-breakfast options to luxury hotels, Stockholm in Sweden offers a broad range of staying options to suit every budget.

Stockholm is certainly one of the world’s most spectacular capital cities. It is well-planned and perfectly designed with equal proportions of greenery, water, and urban area. Thanks to its compactness, you can explore all the city’s attractions within a short span of time.

The race passes through famous districts and finally ends at the Olympic Stadium. Plenty of hotels are located nearby.

The 2023 ASICS Stockholm Marathon is organized by Athletics clubs Hässelby SK and Sparvägens FK. Start line is on Lidingövägen street, located in the Östermalm borough. Finish Line is in the city’s Olympic Stadium.

Accommodation for Marathon in Stockholm Sweden

This stylish hotel is 300 metres from Stockholm... read more

Located only 150 metres from the Rådmansgatan Metro... read more

This charming hotel is housed in a listed... read more

This budget hotel is directly opposite Stockholm Central... read more

Located in the Östermalm district of Stockholm, this... read more

Set in a mid 17th-century building in Stockholm’s... read more

Hôtel Reisen in The Unbound Collection by Hyatt

Situated on the water front in Old Town,... read more

Situated in a stylish 19th-century building in the... read more

Around the corner from the Stureplan entertainment district,... read more

This hotel is situated beside Central Station, 8... read more

This good-value, design hotel is just across the... read more

Best Western Hotel Bentleys is housed in an... read more

This city center hotel is next to the... read more

Housed in a historical building, a former brewery... read more

Located on Skeppsholmen island in Stockholm, this STF... read more

This trendy hotel is located 1 floor below... read more

This modern design hotel is centrally located in... read more

Since the race commences and ends in the area of the Olympic Stadium, it is best to find an accommodation nearby it.

There are plenty of hotels and other accommodation options in close vicinity to the stadium, close to the city centre.

Explore some of the city’s iconic landmarks

Since 1979, the spirit of the marathon has remained the same. With many live entertainment options and thousands of supporters lining the course, this is one of the liveliest marathons on the planet. In fact, Rich Hanna and Dennis Craythorn, the authors of The Ultimate Guide to International Marathons, described the Stockholm Marathon as the best athletic event in the world.

Once the marathon finishes, you can explore the city’s seemingly endless list of attractions. Some of the places you shouldn’t miss include The Royal Palace, Old Town (Gamla Stan), Vasa Museum, The City Hall and the Skansen Open Air Museum.

Like most Scandinavian cities, Stockholm can be expensive, but you save a few Swedish Krona if you know where to look. The locals are quite amicable and love to speak English, which is their second language. People of this city love cakes and coffee. In fact, the city is famous for its pastries, cakes, hot dogs and hamburgers.

No trip to central Stockholm in Sweden is complete without taking a boat tour. The city is surrounded by an archipelago of 24,000 scenic islands waiting to be explored. The Royal Canal Tour takes you through the city’s major waterways, including the picturesque Djurgården canal and along the shores of Saltsjön.

Overall, a trip with your loved ones to this historic yet modern city during the Stockholm Marathon will definitely be a memorable experience.

Don’t know where to stay? Check out our guide for the best areas to stay in Stockholm. 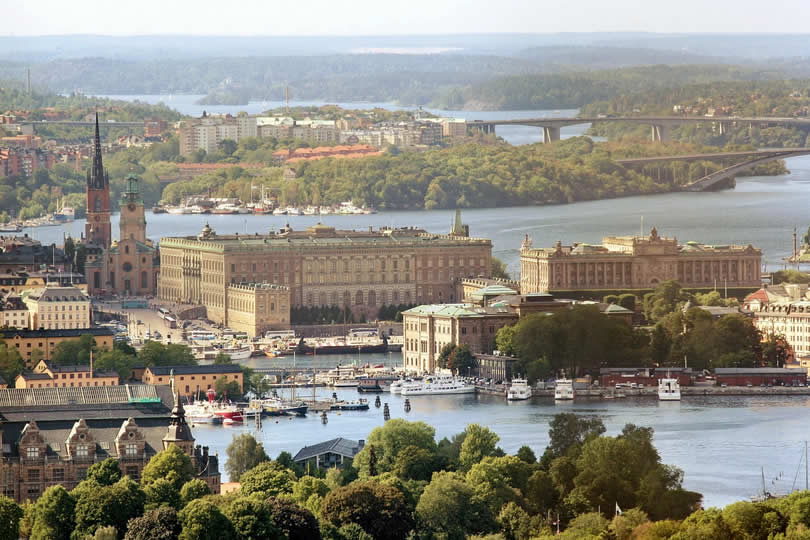 Much of the race happens along Stockholm’s beautiful waterways. The marathon’s route comprises of two laps (16.6 km and 25.6 km) passing through the city’s central region.

It covers the city’s magnificent streets and serene woods of the Djurgarden Royal Park. Along the course, the runners traverse many historical monuments such as the House of Parliment, City Hall, the Royal Opera and the Royal Palace.

The start line of the race is just outside the 1912 Olympic Stadium while the finish line is inside the stadium. The stadium itself has a rich history as over eighty-three athletic world records were set here in a span of 104 years, the maximum for any stadium in the world.

Once the race finishes, the jubilant fans greet the runners. Shortly after the Marathon Expo and the Pasta Party, the Post Race Celebrations begin.

Start line for the 2023 marathon race is on Lidingövägen street, located in the Östermalm borough, east of central Stockholm Sweden. The street runs alongside Östermalms IP (The Östermalm Athletic Grounds).

Finish is in the Olympic Stadium, a large sporting stadium built for the 1912 Olympic Games.

Traveling in Stockholm is easy by underground (T-bana) or bus. You can easily get to the start/finish line at the Olympic Stadium and Lidingövägen street by underground train Stadion T-BANA.

Many participants arrive in Sweden by air at Arlanda Airport (see closest hotels). From here the best way to go to the central part of Stockholm is to take the ‘Arlanda Express’. This express train goes from Arlanda Airport to the Central Train Station in Stockholm (see hotels) in 20 minutes.

Stockholm’s other airports Bromma Airport, Skavsta Airport and Västeras Airport are all well connected with the city centre. Travel by either taxi or coach.