In February 2022 athletes from around the world will descend on the historic area
of Beijing, China to take part in the Winter Olympics, as the games arrive in one
of the best loved tourist destinations in the world.

Visitors will be looking for hotels and other accommodation for the Winter Olympics in all budget ranges for traditional hotels or luxury accommodation options that are amongst the most luxurious in the world.

There are major differences in accommodation that can be explored from hotels to guest houses, home stays, apartments and hostels that offer a wide range of options for the visitor to enjoy and fit into any budget range for those arriving at the 2022 Winter Olympics in Beijing.

All the excitement of winter sports alongside all the mystery of the east: this is what you can look forward to in 2022. The Winter Olympics in China is just around the corner. These grand event sell out fast, so it is best to move quickly and book early for a place to stay.

Featuring a 24-hour fitness centre and an indoor... read more

Located in the capital's CBD area, DoubleTree by... read more

Modern luxury can be enjoyed at Park Plaza... read more

The luxurious Grand Millennium is elegantly located in... read more

The luxurious Ritz-Carlton Beijing is located in Chaoyang... read more

Situated in the middle of the shopping hub... read more

Surrounded by a variety of businesses, entertainment and... read more

Offering a combination of timeless Chinese artistry and... read more

Centrally located in the Chaoyang Commercial District, The... read more

Fairmont Beijing is the first luxury hotel in... read more

Strategically occupying a prime location in the vibrant... read more

Strategically occupying a prime location in the heart... read more

As part of Parkview Green FangCaoDi, the new... read more

As part of the Beijing Yintai Centre, Park... read more

Around a 15-minute walk from the Temple of... read more

An artistic masterpiece of modern and classic, Rosewood... read more

Standing on No. 1 of Sanlitun, InterContinental Beijing... read more

Positioned in the heart of the Sanlitun, CHAO... read more

The PuXuan Hotel and Spa

Located on Wangfujing Street, The PuXuan Hotel and... read more

From 4th to 20th of February, 2022, the appointment is in Beijing. The party is going to be a grand one: the staging of the 2022 Winter Olympics coincides with the Chinese New Year! This is the very best time to visit Beijing: enjoy the amazing New Year celebrations and watch your favourite winter sports.

Beijing is one of the top tourist destinations in China and is the city is home to some fascinating attractions such as the Great Wall of China, the Forbidden City and the Summer Palace.

Editions of the Winter Olympics have evolved over the years as more and more winter sports get to form part of the Olympic package. There are 109 different disciplines in the Beijing “Joyful Rendezvous upon Pure Ice and Snow”. Beijing has added seven new disciplines to the winter sports line-up, including women’s mono-bob, big air freestyle skiing, ski jumping and snowboard cross.

There are many places to stay that can be found close to the many different sites that will be used for the 2022 Winter Olympics for the large number of events that are scheduled to take place.

The upcoming Winter Olympics are a strong tourist attraction. For those wondering about the best place to stay, be assured that you will be spoilt for choice. The city has many hotels and more are under construction to accommodate future visitors.

The best accommodation in the city and the best hotels near the Winter Olympics venues will probably sell out quickly, so, although there is no shortage of places to stay, early booking is always a good idea.

Shangri-La and Shougang Hotel Groups have developed a grand hotel project at Shougang Park, closely connected to the main Olympic ski-ramp and the Olympic Ice Palace.

Built on the Shougang industrial site, this international deluxe hotel is the Winter Olympics Official Centre and will host the Olympic Grand Reception.

The choice of Beijing hotels is vast: from budget hotels, like the economy-class Beijing Goto Hotel, to the three-star Jianhui Hotel, to the more deluxe four-star Park Plaza Wangfujing, to superb luxury five-star hotels like The Peninsula, the Nuo, the Crowne Plaza, and dozens more.

Many international hotel chains are represented in the city, offering the very best accommodation for those who prefer to stay in top-notch deluxe hotels with familiar names like Marriot, Sheraton or InterContinental. 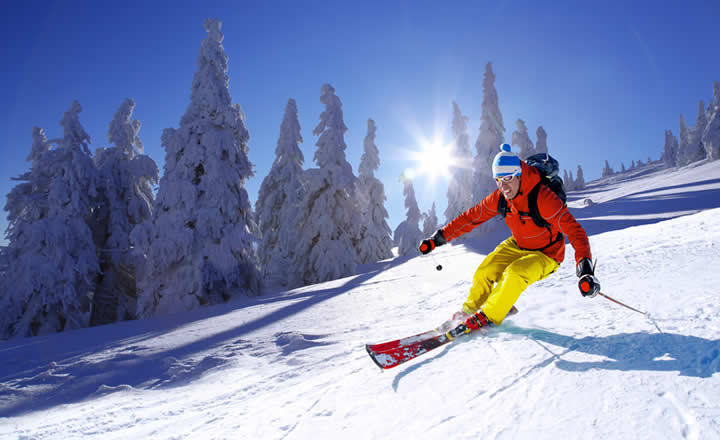 Zhangjiakou and Yanqing are lovely snow-bound areas near Beijing where the skiing and bob/snowboard events will take place. Zhangjiakou is a popular skiing resort and will host most of the skiing events: cross-country, Nordic, freestyle, ski jumping, snowboard and biathlon. The new big air snowboarding events and freestyle skiing will also take place in Zhangjiakou.

The Chongli skiing resort at Zhangjiahou, hosting so many skiing events, is seeing a boom in new hotels, mostly top-end international hotel chains such as Sheraton, Four Seasons, Banyan Tree and InterContinental. Over twenty newly-constructed, top-class hotels are expected to pop up in the lovely mountains around Zhangjiakou, all due for completion next year.

Alpine skiing and bob/luge/skeleton events will be held in Yanqing, a snowy suburb of Beijing, home to the Juyongguan and Badaling sections of the Great Wall.

Skating, curling and ice hockey events will make use of the venues from the 2008 Olympics in the city centre.

The Beijing-Zhangjiakou high-speed railway takes passengers from the city to Zhangjiakou in fifty minutes, and to Yanquing in just twenty minutes. This is handy for those who prefer to stay in one of the many downtown hotels in Beijing; you can reach the event slopes fast and easily.

The sprawling, dynamic, densely populated city of Beijing is feverishly preparing for the great event in 2022. It is a modern ancient city; its history goes back three millennia and its future is in the present with its constantly evolving industry, business, universities, commerce, tourism and culture.

The capital of China, on and off, for centuries, Beijing has much to offer the visitor. From the Forbidden City to the Great Wall, China has a unique fascination, attracting visitors and tourists wishing to discover its secrets, and attend its grand events.

Beijing is the only city to hold both the Summer and Winter Olympic Games. This tells us something about the climate and the geography of the region: situated in northern China, its humid continental climate means hot summers and very cold winters; Siberian winds lower temperatures to zero and below.

The queen of the Olympic snow events is Alpine skiing, in all its sparkling glory. It is a spectacular sport to watch: stunning mountain slopes glistening with snow make a dazzling backdrop to breath-taking performances. The Winter Olympics are a grandiose showcase for the great international skiing champions, and the various downhill or slalom events are closely followed by the public.

Equally spectacular, if not more so, is freestyle skiing which combines fast skiing with acrobatics. In 1979, the International Ski Federation admitted freestyle as an Olympic discipline but restricted some of the more dangerous acrobatics. Which brings us to ski-jumping, which, at Olympic levels, seems to combine skiing and flying!

Cross-country skiing is that other type of skiing. It is how the peoples of Scandinavia got from A to B. Here, what is lacking in speed is made up for in stamina, strength and resistance.

A combination sport like the biathlon, which calls for skill in two widely different disciplines, skiing and marksmanship, reflect the history of the snowy north, where people got around swiftly on skis, just stopping long enough to take a shot at the odd moose. Another combination discipline is Nordic combined, a sport from the snowy plains of Norway that combines ski jumping with cross-country skiing.

Some winter disciplines weld the two skis into one, giving us snowboard, bobsleigh, skeleton and luge, all fast-moving winter sports, exciting to watch.

The indoor part of winter sports takes place in the ice-palaces. Here, we can witness all the grace of figure-skating, the muscle of ice-hockey, the urgent rush of speed skating, and the lively calm of curling.