This historic street racing circuit is one of the worlds great and fascinating circuits. The annual F1 Monaco Grand Prix is held in the city streets of Monte Carlo. It’s in fact the slowest and most difficult circuit of the formula one championship season. Some hotels are located on the track offering splendid views of this historix Grand Prix.

Several hotels offer excellent race views but you have to make reservations early. One of the best hotels for viewing is the Fairmont Monte Carlo with its rooftop terrace.

Looking only for the best hotels ? Check out our handpicked list of top hotels in Monte Carlo, Monaco.

Boasting a rooftop terrace offering views of the... read more

In the heart of the Principality of Monaco,... read more

Entirely renovated in 2018 and offering a seasonal... read more

Set between the mountains and the sea, located... read more

Located in the seaside town of Menton, the... read more

Located on the border of Monaco and the... read more

With an outdoor swimming pool and a fitness... read more

Hôtel Le Dauphin is located on the beachfront... read more

Port Palace is a 4-star boutique hotel in... read more

The Hotel Le Napoleon is located in La... read more

Situated on the border of Monaco, Hotel Olympia... read more

Set in a palace in Monaco listed as... read more

Hôtel de France is located less than a... read more

Luxury Apartment next to Monte Carlo

1 bedroom Apartment next to Monaco

Set in Beausoleil, less than 1 km from... read more

Where to Stay near Monaco GP ?

Find your place to stay close to the Formula One Circuit of Monte Carlo in the principality of Monaco. This famous race track is a street circuit in the streets of Monte Carlo and La Condamine around the harbour.

Monte Carlo is home to many exclusive hotels but you will find also some budget friendly accommodation options. Looking for a cheap place to stay ? Search for the best rooms in one of the 2 or 3 star hotels which you can find spread around the city.

Another option is staying in a self catering apartment. These rentals will come with a fully equipped kitchen and living room. Some offer sea views and a balcony as well.

Prices for hotels during the F1 grand prix are very high. For a more budget friendly option you can take a look at one of the accommodations in the towns within easy reach of Monaco. Nearby villages and towns include Cap d’Ail, Beausoleil, La Turbie, Eze and Roquebrune-Cap-Martin. Another option is staying in the city of Nice France. 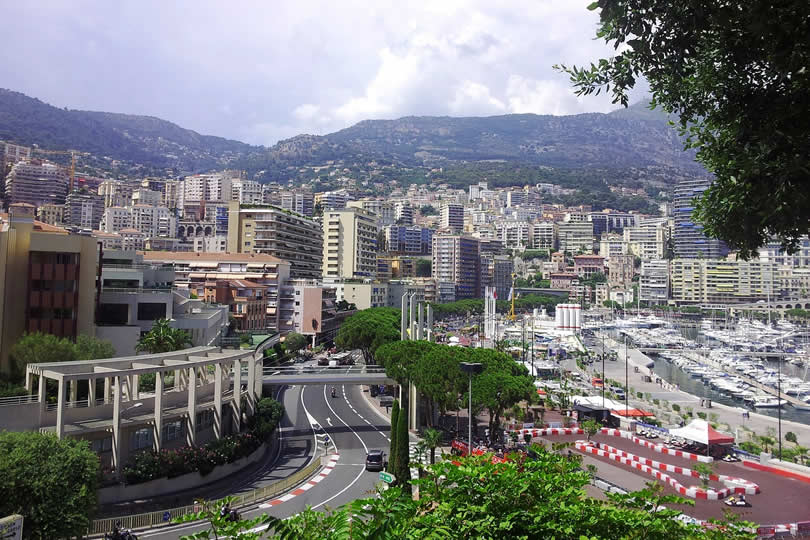 Although considered to be one of the slowest tracks in the annual F1 Championship race, Monaco is one of the most spectacular races of the season and that’s what keeps spectators coming back year after year. The narrow track winds around the city, past the spectacular casino square, through the tunnel straight-away and then around the harbour.

The Monaco Grand Prix has a colourful beginning as well. Having grown out of a rivalry between two famous seaside towns, Nice and Monte Carlo. Nice, every year, had the carnival, which attracted the rich and famous. Monte Carlo also wanted an event that would attract visitors and started organising a car rally, which later became the Monte Carlo Rallye and later attracted the F1 Grand Prix. Now the annual F1 race is the premier event, attracting spectators from all over the world.

Location — The sovereign and independent state, the Principality of Monaco, lies on the southern coast of France, with the French Riviera on the west and the Italian Riviera on the east, with the Mediterranean Sea to the south.

Directions — # By car : Monte Carlo can be easily reached by car using the A8 motorway, which connects directly to the whole network of European motorway systems. It is easy to reach Monaco from Nice (17kms/10mi), Cannes (50kms/31mi) or even Italy (Genoa is 174km/109mi away).

# By train : The Monaco-Monte Carlo (SNCF) railway station is a stop for many international trains. There are numerous railway connections to all the cities on the Côte d’Azur, from Cannes to Menton. The train to Nice takes only 20 minutes.

Air Connections : The nearest international airport is Nice Côte d’Azur International Airport, which is located 37kms (23mi) away from Monaco.