Hotels in European Quarter near EU Commission and Parliament

Many business hotels nearby

Many business hotels or apartments for rent in Brussels are located in the European Quarter or District, so you can reach the EU Commission in just a couple of minutes. Most internationally-recognised hotel brands are represented in the city, as well as a choice of independent establishments. Choose the accommodation to suit your budget and needs, from excellent budget 3-star rooms to top-of-the-range 5-star hotels in Brussels.

Stay in the best hotels within close distance of all EU buildings and institutions such as the European Parliament Building, European Commission (Berlaymont), Council of the European Union (Europa building), European External Action Service (EEAS) and the Economic and Social Committee and the Committee of the Regions.

This Art Deco hotel is centrally located in... read more

Newhotel Charlemagne is set in the heart of... read more

Craves is located in the heart of Brussels,... read more

Hotel A La Grande Cloche is set in... read more

This luxurious hotel in the heart of Brussels... read more

This hotel is located 2 minutes from Grand... read more

Le Louise Hotel Brussels- Mgallery is around the... read more

This luxurious 5-star hotel is 50 metres from... read more

Decorated in industrial vintage style, this hotel is... read more

NH is situated on the historic Grand Sablon... read more

The Sun Hotel is located in Brussels’ Ixelles... read more

In the heart of the historic city centre... read more

The Dominican is a 4-star hotel located in... read more

A closely kept secret, this luxurious residence is... read more

Set in the heart of Brussels' European District,... read more

These modern studios and apartments are in the... read more

Adagio Access offers studios in the centre of... read more

Motel One Brussels is centrally located in Brussels,... read more

Located in the heart of historical Brussels, 250... read more

Hygge Hotel is situated in Brussels and features... read more

The Espace Léopold in Brussels, Belgium houses a complex of European Parliament buildings where the legislative chamber can be found and the European Commission meet. This complex is in the European Quarter which is 200 metres from Brussels Luxembourg station and a 20-minute walk from Brussels city centre, which is one of the best areas to stay.

The European Parliament has two meeting places, namely the Immeuble Louise Weiss in Strasbourg, France, which serves for plenary sessions and is the official seat and the Espace Léopold complex in Brussels, Belgium.

Most of the time, Parliament and the MEPs are based in Brussels where its specialist committees meet to scrutinize proposals for new EU laws. Parliament meets for one week a month in Strasbourg in full plenary session to amend and vote draft legislation and policy. A number of additional two-day plenary sessions are also held in Brussels.

The “European quarter” around the Schumann metro station is also worth strolling through. It is possible to visit some of the buildings in this area, which house the European Parliament, Council of Ministers, European Commission (the “government” of the European Union) and its administration. Perhaps most impressive is the recently erected European Parliament building, towering over the pretty parc that also houses the Natural History museum.

There is no shortage in hotels or other accommodation options in Brussels located within close distance of all European buildings and institutions. 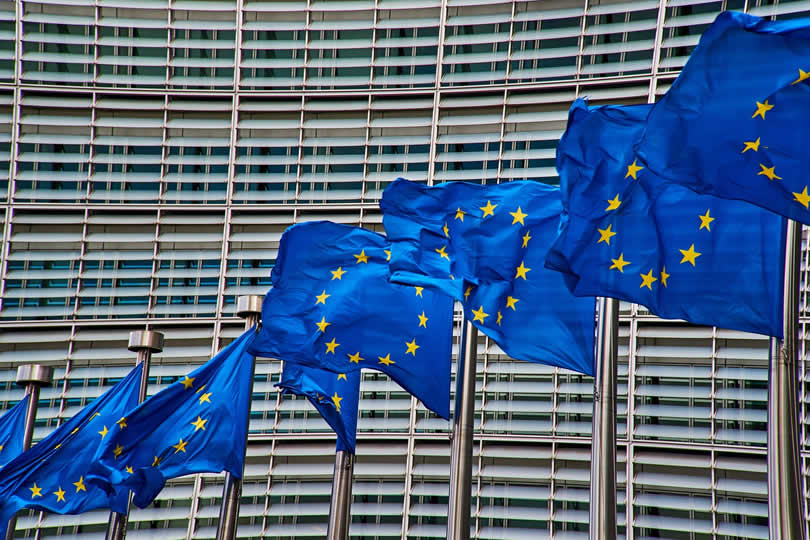 Brussels European Quarter — The “European quarter” around the Schumann metro station is also worth strolling through. It is possible to visit some of the buildings in this area, which house the European Parliament, Council of Ministers, European Commission (the “government” of the European Union) and its administration. Perhaps most impressive is the recently erected European Parliament building, towering over the pretty parc that also houses the Natural History museum.

The European institutions have changed the face of Brussels over the past fifty years, particularly in the 19th century Leopold Quarter where Wiertz lived. Originally conceived as an exclusive residential district located just outside the city walls, this neighbourhood has come to be dominated by modern glass-and-steel office buildings occupied by the European institutions.

The European Commission is one of the main institutions of the European Union. It represents and upholds the interests of the EU as a whole. It drafts proposals for new European laws. It manages the day-to-day business of implementing EU policies and spending EU funds.

Council of the European Union is also known as the EU Council, this is where national ministers from each EU country meet to adopt laws and coordinate policies.

European Council is an EU institution where meetings are held by EU leaders. Typically, there are around 4 meetings a year, chaired by a permanent president. 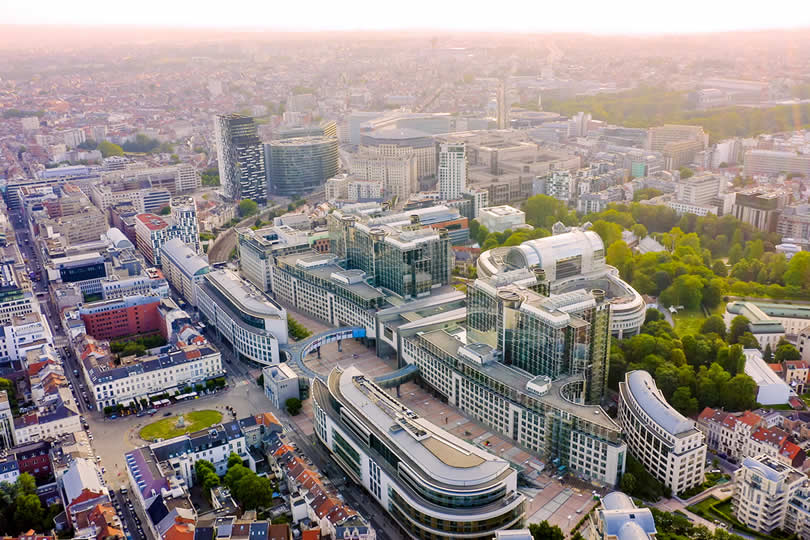 Where is European Commission in Brussels ?

The European Commission has its headquarters in the Berlaymont building. This office building is located at Schuman roundabout at 200 Rue de la Loi in the European district of Brussels in Belgium.

Where is Council of the European Union in Brussels ?

The building is located in Brussels EU Quarter at Rue de la Loi – Wetstraat 175 next to the Schuman roundabout.

Find cheapest places to stay in the heart of Brusssels around the EU Commission in the Berlaymont building and Council of the European Union headquarters located in the Justus Lipsius building.

The City of Brussels in Belgium

Brussels is an interesting city to visit for all members of the family. There is the Parlamentarium, where interactive displays take visitors through the processes of the EU Parliament, and it explains how the Commission affects all citizens of Europe every day.

Not too far away is the Museum of Natural Sciences which is a family favourite. The centrepiece of the city is the Grand Place, a vast space where there is a flower market, interesting architecture, coffee shops, local artists and plenty of sights to photograph. This square in central Brussel or Bruxelles offers different things throughout the year and there is always something amazing to see.

Close by is a selection of high-end stores if shopping is on your list of things to do. Other places to see include a beautiful cathedral, quaint streets, a fine art gallery and a huge park called Cinquantenaire. Of course, no visit to Brussels is complete without stopping by the famous fountain featuring a statue of a small boy answering the call of nature!

Restaurants and bars are plentiful in Brussels. Dine out on fine cuisine or burgers and chips, with everything in between on offer too. Take time to taste silky Belgian chocolate and delicious Belgian waffles before you leave as well. 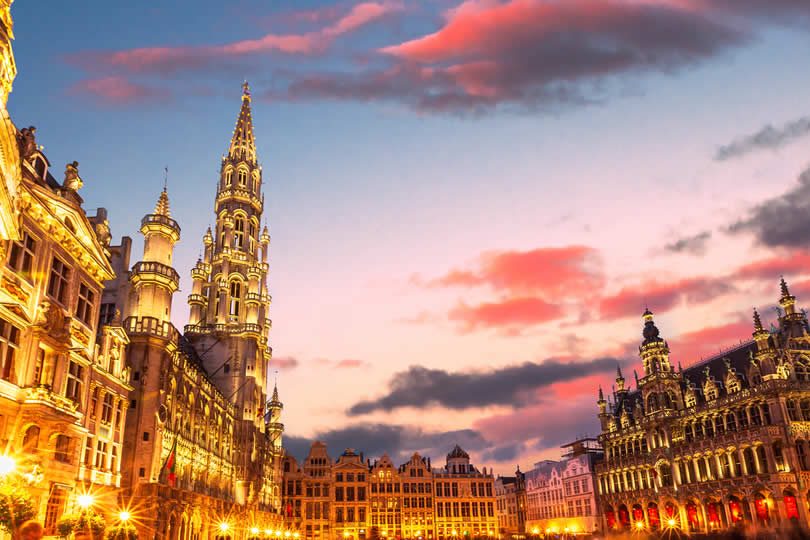 Getting around is easy

Getting around Brussels is easy as there is a great transport system to hand. Hotels near the European Parliament complex are close to a choice of buses and trains which are easy to use.

Getting from Brussels international airport is straightforward as well; on the basement level of the airport is a train link into the city centre which takes 17 minutes. On the ground floor a number of buses pick up passengers and take them to various destinations around Brussels.

There is also a bicycle hire system called Villo Bikes and it operates in a similar way to the UK’s Boris Bikes. What a fun and healthy way to see parts of the area in fair weather.

Connections — Brussels (Brussel – Bruxelles) is served by Brussels Airport, located in the nearby Flemish municipality of Zaventem, and by the much smaller so-called Brussels South Charleroi Airport, located near Charleroi (Wallonia), some 50 km (31 mi) from Brussels.

Brussels is also served by direct high-speed rail links: to London by the Eurostar train via the Channel Tunnel; to central Amsterdam, Paris Gare du Nord and Cologne hbf by the Thalys; and to Cologne and Frankfurt main rail station by the German ICE.

Which Places to Visit Belgium?