Consider one of the best or budget hotels close by the Midi Train Station in Brussels,
prices start at just over 20 Euros per person, per night and the wealth of local restaurants,
snack bars and patisseries makes this a budget choice for a traveller. The good thing
about being close to the Midi Train Station is that you’re close to the centre
of town and all the tourist attractions, yet based in an inexpensive area.

There are lots of comfortable cheap hotels near Brussels Midi train station that are perfect for short and longer stays. Accommodation near the Eurostar railway terminal is both convenient and affordable and the area is within easy reach of the city’s main sights and attractions.

Choose smaller family run establishments close to the gare du Midi or opt for well-known chain hotels that often have deals and offers. It’s easy to find discounts on all types of accommodation in Brussels and the city is a popular destination at any time of year.

The Hotel Euro Capital Brussels is only 200... read more

Hotel de France is only 600 metres from... read more

Be Manos Hotel Premier Collection is situated a... read more

Located next to Brussels-South Train Station with Eurostar... read more

Hotel Continental with their 24/7 reception is located... read more

Hotel Aviation is located in Anderlecht, a 6-minute... read more

The self-catering Marco Polo Midi benefits from a... read more

Located in Anderlecht, within 900 metres from Gare... read more

Set within less than 1 km of Grand... read more

Situated in Brussels, less than 1 km from... read more

Set in Brussels and with Porte de Hal... read more

Miroir27 features accommodation with private balconies in the... read more

Cheap hotels are a smart choice in Brussels and you’ll discover that most accommodation near the gare is comfortable, clean and attractive. The city is the base of many European organisations like the EU Parliament and its status is reflected in the quality of accommodation.

From simple bed and breakfast residences to the finest hotels, you’ll enjoy excellent service and value for money in Brussels.

Plus, hotels near the Eurostar train station allow you to see a part of the city that isn’t on the tourist trail. Visit the Marolles flea market at Place du Jeu de Balle or browse the secondhand shops Blaesstraat or Hoogstraat which are just a short walk from cheap hotels near the station.

Why not set aside a day for shopping in Avenue Louise or visit landmarks like the Royal Palace? Be sure to see the famous Manneken Pis; hotels near gare Midi are just a short hop from the city centre by bus or metro.

Visit in summer to relax on the beach or take part in a host of beach themed activities when Brussels Plage comes to town or choose cheap accommodation in December to shop at the city’s Christmas markets.

There is something for everyone in Brussels and cheap accommodation near the Midi train station is available throughout the year. Don’t know where to stay ? Check best areas to stay in Brussels.

Bruxelles Midi station is the city’s largest railway terminal and choosing a hotel nearby means that you’ll enjoy excellent access to all parts of the city.

Take Line 2 on the metro from Midi to explore the historic sights. Grote Markt or Grand Place is one of the most famous squares in the city and its ornate medieval architecture attracts visitors from all over the world. The King Baudouin stadium and RSC Anderlecht football stadium is within easy reach.

Local bus services can be caught just minutes from accommodation near Gare Midi/Zuid too. In fact, you’ll find that hotels in this part of the city are a great base from which to explore and the metro stops at many of the most famous attractions like the Atomium at the Expo halls.

Whether you’re visiting the city with family and friends or going to Brussels on a business trip, choosing the right accommodation is essential.

Cheap hotels will save you a considerable amount on the cost of your trip and of course, being near the Eurostar railway terminal is an added bonus. Eurostar is a cost-effective way to reach Belgium from St Pancras in Central London (see best areas) and you’ll arrive at the gare du Midi train station which is just south of the historic city centre.

The dedicated Eurostar terminal is situated within the Gare du Midi station in central Brussels. The Eurostar Brussels Gare du Midi terminal is one of the main stations in the city and where you can transfer to connecting rail travel to either cities in Belgium or further afield such as Amsterdam Central in Holland. 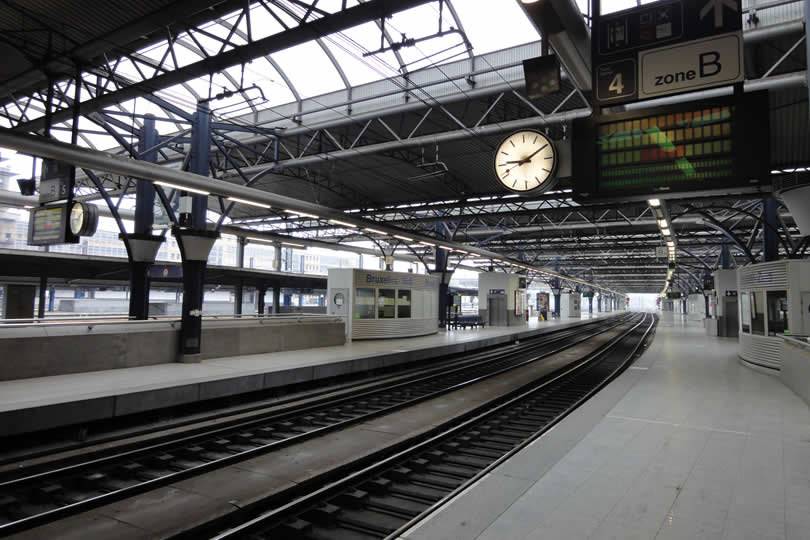 Also known as the red train, the Thalys Train is a High Speed premiere train that links Paris Gare du Nord, Brussels, Amsterdam and Cologne central station. In a matter of hours, you will have traveled city-center to city-center in comfort and style. A Thalys ticket departing from or arriving at Brussels-Midi is also valid for any regular (non-Thalys) train to Brussels North, Central, Luxembourg and Schuman stations.

Thalys high-speed trains whisk passengers quickly and comfortably from the centre of one major city to another, connecting the great metropolises at the heart of Northern Europe.

They facilitate travel between the company’s numerous destinations and make it possible to explore contemporary Europe with its open and dynamic nature.