Hotels in Munich near Central Train Station Hbf in Germany

Travellers arriving into the city’s München Hauptbahnhof will find a great choice of hotels, pensions and cheaper hostels just a short stroll from the central train station, letting them check-in conveniently, and get out and explore what the city has to offer.

The Main Train Station, Hauptbahnhof, is located in the city centre of Munich Germany, only approximately 2 km from the central square Marienplatz (Holy Mary’s Square) and the City Hall, it is a 20 minute walk. It is a terminus – which means the end of rails all point to the center of town.

There is a wide choice of hotels near Munich Hbf railway station, tailored for guest comforts and great savings.

Accommodation in Germany near Hauptbahnhof Station in Munich

This hotel is located at the Sendlinger Tor... read more

This hotel offers rooms with flat-screen TV, a... read more

This hotel is located right next to the... read more

This hotel provides Art Nouveau-style rooms in the... read more

This 4 star superior hotel is directly beside... read more

This 4-star hotel is situated 100 metres from... read more

This hotel lies in a side street, just... read more

This 4-star hotel is within a 5-minute walk... read more

Extensively renovated in 2017, this 5-star hotel is... read more

THE 4YOU Hostel & Hotel Munich

Just 300 metres from Stachus Square in the... read more

Free WiFi in all rooms, a Mediterranean bistro... read more

This hotel is located near the Oktoberfest Beer... read more

Located in the Ludwigsvorstadt district of Munich city... read more

The family-run City Aparthotel München is in the... read more

Enjoying a central location in Münich, this modern... read more

Conveniently located in the heart of the city,... read more

AdvaStay by KING's offers accommodation in the heart... read more

Located in Munich and with Karlsplatz (Stachus) reachable... read more

Centrally located at the Stiglmaierplatz square in Munich,... read more

Travel on a budget ?

Whether you’re heading into town for a couple of nights, or looking to enjoy a longer stay, there’s a first-rate choice of hotels and cheap guest accommodation, tailor-made to suit every budget. With so much to see in famous Bavarian city, it makes sense to stick close to the heart of it all.

Book the best hotels near Munich Hauptbahnhof for maximum convenience for your trip to Munich Germany. From cheap hotels and basic rooms right next to the train station, to plush luxury in historic hotels and guest houses teaming with character, there’s affordable accommodation for every trip.

Big groups and families will find familiar hotel chains throughout the city, with family-friendly guest accommodation just a short distance from the main central station.

For lone travellers and backpackers looking to make a big saving on overnight stays or hostel accommodation, there’s plenty of cheap alternatives to staying in the city. 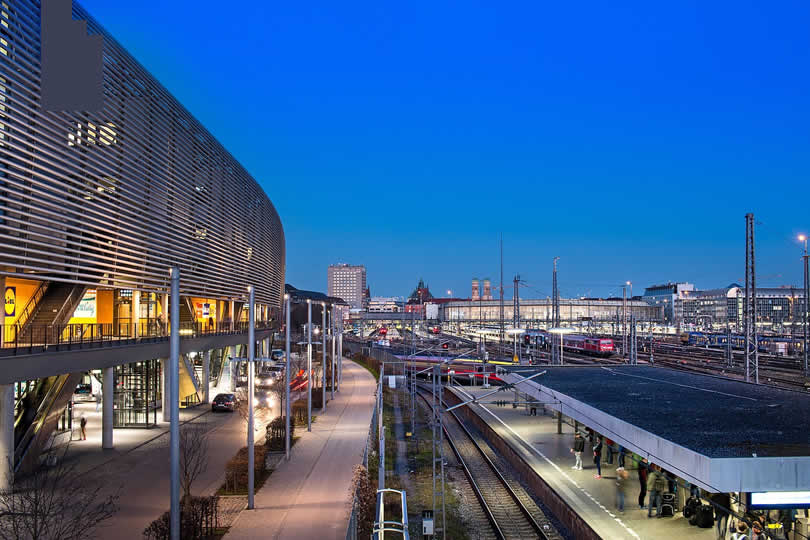 If you’re looking for an authentic taste of Bavaria, Munich makes the ideal destination. One of the most historic cities in Germany, Munich’s home to some of the biggest beer halls, oldest museums, and iconic architecture in Western Europe.

Offering an up-close experience of authentic Bavaria, the city plays host to world-renowned Oktoberfest once every year, with seasonal feasts, celebrations and festivities to cater to every visitor, year-round.

Kick off carnival season in one of the oldest cities in Germany, with some of the biggest street parades and celebrations on the continent. Looking to savour some local Bavarian flavours?

Home to some of the biggest and most historic drinking halls in the world, Munich’s local ales and beers are enjoyed the world over. Enjoy a premium stay just yards at hotels just a stroll from the famous Hofbräuhaus. Looking to really unwind?

After check-in, head to the Hirschgarten and enjoy a delicious Bavarian wheat beer in the biggest beer garden in the world.

First built in the 1800s, Munich HBF has been connected the historic Germany city to the rest of the continent for over two centuries.

This railway station is one of the largest in Germany and carries both regional and international service. Also, it provides S bahn service, which is covered with a German Railpass.

Today, the train station connects Munich to the rest of Germany, as well as providing convenient international connections to Switzerland, Austria, France, the Czech Republic, and beyond. Whatever the departure point, visitors to Munich will can enjoy some of the most iconic and historic architecture in all of Germany.

More than 800 long-distance trains and regional trains arrive and depart every day, and there are immediate connections to all urban trains, called S-Bahns, underground lines U1,U2,U3,U4,U5, trams and buses. You will find taxi stands at all exits of the main train station.

Just use the subway or tram if you want to get on through Munich from the train station.

Munich transfer is one of the best you might come across in Germany. There are eight subway lines and a dozen “S-Bahnen” supporting this net. There is also the so called U-Bahn, very similar to the S-Bahn.

The S-Bahn runs west to east and vice versa, and they all pass by the main central train station and the Marienplatz, the latter offering transit to north and south. At Marienplatz catch the U-Bahn to the north, to the Olympic grounds and the football stadium “the Allianz Arena”.

Once your train has arrived at central station go downstairs to catch any S-Bahn that goes to Marienplatz . All subway and S-Bahn-stations are under ground. Directly in front of the main entrance there is a tramway stop. If you want to discover Munich riding the tram – just step out of the building.

Looking to travel on a budget? You’ll find plenty of cheap accommodation right in the heart of town, with great rates on seasonal events. Visitors can stick central and enjoy centuries’ of German history, right on the door step, or make the most of the city’s efficient metro system for easy connections across the city and beyond.

Language — German. Many Germans speak English, and English is usually spoken at major hotels and restaurants as well as in principal tourist areas.

Electricity — In most places, the electricity is 220 volts AC, 50 cycles.