Hotels in Munich near Oktoberfest 2021

If you’re looking to celebrate Oktoberfest in style, there’s no better place to enjoy a flagon of your favourite German beer than Munich, the heart of Germany’s Bavarian region and the birthplace of the famous annual beer festival.

It attracts so many visitors from all over the world that it can be truly described as a Festival of Nations. It last 17 days and millions of visitors from Germany and other parts of the world will gather every year in Munich. So, let’s check out some of the very best hotels near Oktoberfest in Munich Germany.

Best hotels for Oktoberfest in Munich

Hotel Metropol by Maier Privathotels stands in a... read more

This hotel offers rooms with flat-screen TV, a... read more

This 4 star superior hotel is directly beside... read more

This 4-star hotel is situated 100 metres from... read more

This hotel is situated opposite Munich Main Station... read more

Centrally located in Munich, only 250 metres from... read more

A 5-minute walk from Munich Main Station and... read more

This hotel lies in a side street, just... read more

This 4-star hotel is within a 5-minute walk... read more

Just 300 metres from Stachus Square in the... read more

Free WiFi in all rooms, a Mediterranean bistro... read more

This hotel is located near the Oktoberfest Beer... read more

Located in the Ludwigsvorstadt district of Munich city... read more

The family-run City Aparthotel München is in the... read more

Enjoying a central location in Münich, this modern... read more

Conveniently located in the heart of the city,... read more

AdvaStay by KING's offers accommodation in the heart... read more

Located in Munich and with Karlsplatz (Stachus) reachable... read more

Set in Munich, a 16-minute walk from Oktoberfest... read more

II you think about Germany, a thing many people will think about is the Oktoberfest festival. Picture yourseld huge steins of beer, singing, platters of sausages, men dressed in Lederhosen and ladies dressed in Dirndls.

If you want to get the hotel of your choice or make reservations in the beer tents, it is very important to plan your visit and accommodation well in advance. More than 6 million people are visiting the Theresienwiese fair grounds every year.

When the Oktoberfest opens in Munich, all the brewers and publicans march in procession through the town accompanied by gaily decked carts and brewers’ drays, drawn by teams of hefty dray horses.

No motorised vehicles are tolerated in this ancient procession. Punctually at 12 noon on the opening day the Lord Mayor of Munich ceremonially taps the first barrel of “Wies`n” beer in one of the huge beer tents, as twelve salvoes are fired from small cannons situated on the Theresienhoehe.

It attracts so many visitors from all over the world that it can be truly described as a Festival of Nations. It last 17 days and millions of visitors from Germany and other parts of the world will gather every year in Munich.

The festival itself is held towards the southwest of the city centre, in the Theresienwiese field. The enormous fair grounds have been called “Theresienwiese” after the Princess Therese.

This world famous event is held every year the last two weeks of September into the first week of October. It has been a tradition for almost 200 years. There is always a friendly and very lively atmosphere at the Munich Oktoberfest, whether you are at the fair or in one of the ambiance beer tents, you are sure to be caught up in the fun of it all regardless of age or gender.

Book now cheap and the best hotels in Munich near Oktoberfest Beer Festival held in 2021 from Saturday 18 September to Sunday 3 October. 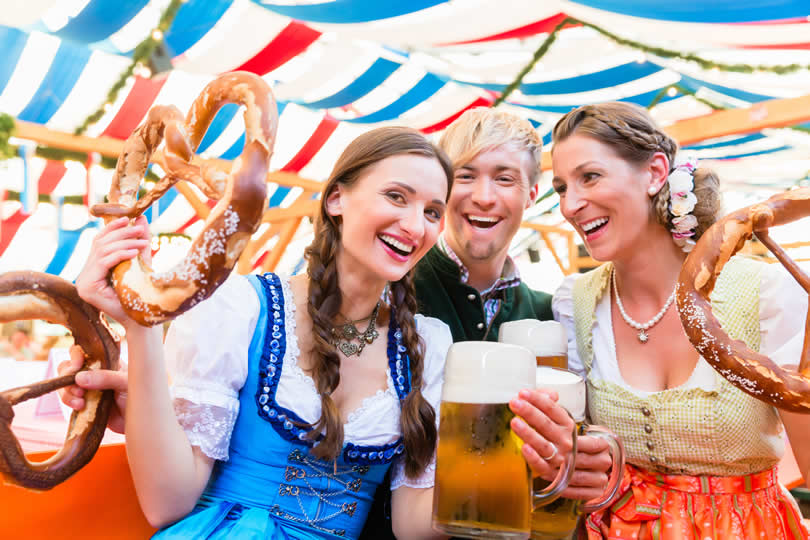 Celebrate in style with great-rate hotels

One of the biggest cities in Germany and the capital of the Bavarian region, Munich is an essential stop for any tourist visiting Germany.

Oktoberfest aside, the city is known worldwide for it’s delicious beers and beverages, with a brewing legacy that goes back century.

Tick a few must-sees of your bucket list with a visit to the Hofbräuhaus, or enjoy a glass of your favourite German beer in the sunshine with some of the biggest beer gardens in Europe.

Once every year, the city is lined with master breweries, pop-up bars and beer stands, with the finest names and brands in beer-making coming together to continue to make Oktoberfest the biggest event of its kind.

Whether you’re just in town for a couple of nights, or looking to see the whole of Oktoberfest through, there’s plenty of choice when it comes to reserving an affordable hotel, with special rates and discounts for the festivities.

Wherever you’re staying in Munich Germany, it’s easy to get out and explore, letting you see as much of the city as possible, even if you’re in town for a weekend. Munich’s metro and train system connects key points of interest across the city, with regular service throughout the day.

Once the partying is done for the day, it’s easy to find your way back to your hotel, with first-rate tourist information provided in all leading languages. If you have some time left, why not watch a game at the nearby Allianz Arena, the home stadium of Bayern Munich FC.

Save a bundle with cheap hostels

If you’re fine with frill-free rooms and basic comforts, hostels offer great value accommodation for when you’re looking to save on the room so you can see more of your destination city.

Munich is one of the most cosmopolitan cities in western Europe and caters to a diverse range of international visitors and travel parties of all sizes.

Big groups can make huge discounts on hostels and basic dorms for when comfortable accommodation is all that’s required, while lone travellers can still save, enjoying all the flexibility of regular hotels for complete freedom.

Like all hotels, hostels tend to fill up closer to big events, so be sure to book way in advance for the biggest savings and best rates on cheap rooms and hotels for Oktoberfest.

All in all book fantastic hotels tailored for every budget across Munich, with five-star luxury at every corner, alongside more affordable hotel rooms, cheap hostels, and easy to find private accommodation for when you’re really looking to save money.

Oktoberfest runs for more than 2 weeks every year in September and October, giving visitors ample time to explore internationally celebrated beers and ales, delicious Bavarian snacks and bar foods, and some of the most breath-taking beer halls in the world.

Book early for best availability for hotels near Oktoberfest 2021 in Munich Germany. You could save 10%, 25%, 35% and more on room rates.

Powered by GetYourGuide
More Attractions, Tours and Activities
Scroll to top
By continuing to browse this site, you are agreeing to the use of cookies, whose purpose it is to provide web analytics and measurements of visitor traffic and browsing behavior. Find out more.