Where to Stay in Leuven Belgium ? 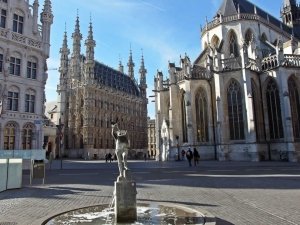 Leuven is well known as a university city, as it is home to Belgium’s largest university, the KU Leuven University. Other than that the city is famous for attracting tourists from all over the world. The city stands out for its historic attractions.

Most tourist attractions are concentrated around the city. At the centre of Grote Markt, the city’s grand square, is St.Peters Church, one of the best Brabant Gothic architectures in Belgium. The church also converted some of the historic buildings to religious art museums operated by M-Museum Leuven where Christ’s last supper is commemorated.

What’s the best area to experience the city for the first time, tourists, what’s the best district for shopping, or where to stay for nightlife or on a budget ? Read on below to find out more best neighbourhoods to stay in Leuven Belgium.

What is the Best Area to Stay in Leuven ?

Leuven City is quite historic, from the city hall built in the 19th century, which bears the history of the city, to the Groot Begijnhof. On the east of the city hall are Naamsestraat and the university buildings that date back to the 15th century. Since the city centre is dominated by university students, the neighbourhood is quite lively with vibrant activities. Some numerous restaurants and hotels offer affordable accommodation. This is a good reason why you should choose to stay here for your vacation.

Where to Stay in Leuven City Centre

Best Areas to Stay in Leuven

Best places to stay in Leuven for romantic trip ? Bed and Breakfast or Boutique Hotel

Book a bed and breakfast in one of the quiet homes or better stay in one of small boutique hotels in the city centre.

What’s the best neighbourhood in Leuven for shopping ?  Bondgenotenlaan

Known as Champs Elysees, Bondgenotenlaan stretches to around one kilometre. It has a high concentration of stylish boutiques and restaurants. Other than the essential unit stores, the street also has exclusive shops that sell clothes and decorative items. The best place to stay in Bondgenotenlaan is around the city hall. It is the most convenient place since it’s near the railway station.

Oude Market Area is the most vibrant place to stay with the highest concentration of restaurants and bars. During summer, terrace seating becomes a pleasant thing for people to enjoy the weather.
You can enjoy an exciting nightlife with music and your favourite drinks in the Oude market area. You have a choice of a variety of nightlife spots in the area, where you can dance and drink the night away as you have a good time with friends. Over the summer vacation, the market is spiced up by several festivals as well. Most of the restaurants in the city will offer accommodation at affordable rates.

Where to stay in Leuven on a budget ? Leuven Train Station area

Leuven train station is one of the busiest in Belgium. From Leuven city centre, the train will take you to Antwerp central station. The busy station will also take you to Brussels Airport, as well as to central Brussels attractions and sights. With a well-organised transport network, it is ultimately the best place to be on a budget. Hotels around the station are cost-friendly as well. Take a few minutes’ walks to the museum and the great parks in the town centre.

The 4 Best Neighbourhoods in Leuven for Tourists

Located in the city centre is the The KU Leuven University, which has maintained the oldest botanical gardens in Belgium. The garden was established for the medical students in the 16th century for medicinal plants. The enormous greenhouse now houses both exotic and ingenious plants as well as aquatic medicinal plants.

The university owns most of the buildings around Groot Begijnhof, a historical quarter in Leuven. The massive street of more than 1,000 buildings shows the rich historical heritage of Leuven and it attracts a good number of visitors every year. Make sure you go up the topmost floors for a panoramic view of the historical buildings that run down to the beautiful parks.

Located at the inner part of the city is the M-museum. It majorly holds the municipal art and craft collections. The collections include sculpture, glasswork, paintings, photographs, videos, and metalwork. The museum also holds cultural events throughout the year.

While Ghent, Bruges, and Antwerp cities are situated on the lower sides of the city, Leuven shopping district is hillier. However, a part of the city is down the Dijle valley built along its banks. Tourists who have trouble walking can board a taxi or more so a train to the neighbouring cities.

Lastly, Leuven is famous for its numerous breweries. If you fancy a good bottle of beer, then you should take a tour to some of the biggest breweries in Leuven such as Brewery Stella Artois, Brewery De Vlier, and Brewery De Kroon.

Grote Markt is comprised mainly of houses that date back to the 14th century. Grote is live with fun events throughout the year including a phenomenal Christmas market. During summer, there is the flower carpet event that paints the whole old market with flowers. It is spiced up more by live music and food festivals throughout the summer.

Oude market, on the other hand, is well known for its chain of restaurants and bars. It is the best place to experience the Leuven nightlife.

Townhall is the most distinguished landmark in Leuven City with its architecture from the 15th century. The walls are decorated differently to showcase 236 figures in town history. The roof is highly decorated with turrets, while the bases are decorated with biblical reliefs from the original medieval building.

Grand Beguinage area also known as Groot Beginjnhof is the town’s most captivating area in the city. The romantic complex was founded in the 13th century. It is built along Dijle River. The site was bought by the Leuven University and restored as a student residence as well as lecture halls.

Sint-Jan-de-Doper an early beguine church built in the 13th and 14th century serves as the community worship centre.

3. Heverlee (Outside of City Centre)

Heverlee is the suburb of Leuven city with numerous parks. A great place for romantic walks. The best park is Abbey park. It is a historic park founded in the 10th century and was a home for the monastic community.

The park has a chapter house, with both Gothic and Renaissance architectural styles. The park also has a library and a refectory. You may also choose to visit the Monastery Church built nine centuries ago and redesigned four centuries ago.

Leuven train station connects the city to many other destinations in the north conveniently. You may choose to stay here because of the convenience especially if as a tourist you want to visit many historic sites in Belgium with central accommodation.

Across the station is Naamsestraat where most of the university buildings are. Some of the buildings worth a look are; St.Michael Church built-in 1650, King’s College, Arras college and Premonstratensian college.

Where to Stay in Belgium ?

Popular in / near Leuven, Belgium

Book Best Hotels in Leuven
Scroll to top
By continuing to browse this site, you are agreeing to the use of cookies, whose purpose it is to provide web analytics and measurements of visitor traffic and browsing behavior. Find out more.