Athens Marathon is one of the oldest races in the world. It is a yearly road
marathon race that is staged in Greece’s capital Athens. The race is usually
held in early November, the second Sunday of the month, and it continues
to attract many participants from across the globe.

Athens is one of the most visited cities in Europe and across the globe. It is a UNESCO world heritage for its numerous historical monuments, and it is considered the birthplace of modern civilization.

For many years, the city was known for its ancient buildings, but today the city is a blend of ancient and modern buildings.

Looking only for the best hotels ? Check out our handpicked list of top hotels in Athens.

Where Should I Stay ?

If you are looking for one of the best places to stay in preparation for the Athens Marathon, you can choose from numerous strategic places within Athens.

The most convenient area you should opt for is any hotels near the city centre surrounding the Panathenaic Stadium. Another option is to stay close to a departure station where buses leave to the start line.

Accommodation for Marathon in Athens Greece

This luxury Athens hotel is ideally situated in... read more

Set in one of the finest areas in... read more

The small and friendly Metropolis Hotel is located... read more

Located in the center of Piraeus, Piraeus Port... read more

Housed in a restored neoclassical building right in... read more

Centrally located in Athens, within a 10-minute walk... read more

Featuring a terrace, The Athenians Modern Apartments is... read more

Living near Acropolis by Sylvia Staikou

Situated in Athens in the Attica region, with... read more

Your home under the Acropolis, roofdeck with view!

Right in the centre of Athens, situated within... read more

Located within less than 1 km of Monastiraki... read more

Set within 300 metres of Monastiraki Square and... read more

Located in Athens, a few steps from Ermou... read more

In the heart of Athens

Right in the heart of Athens, situated within... read more

Set in Athens and within 600 metres of... read more

Anna's apartment near to Acropolis and metro

Set in Athens, less than 1 km from... read more

The Marblous Athens is located in Athens, 200... read more

Athenian house with yard in Ampelokipoi

Ideally situated in the centre of Athens, Belle... read more

Set in the heart of Athens, Athens Christokopidou... read more

Located in Kolonaki and housed in the former... read more

Where is the Start and Finish of Athens Marathon ?

The starting point for the Athens marathon is Marathon Start Venue, located in Marathon’s town. The town of Marathon has a rich history that is related to the marathon race.

It was where the Battle of Marathon took place in 490 BCE. During the battle, the outnumbered Athenian armies defeated and resisted the Persians. It is believed that Pheidippides, who was a Greek herald run from the town to Athens to deliver the message of victory, and this is believed to be the origin of the race.

The Marathon is scheduled to begin at 09.00 AM. The starting point is quite raised with the first 200m of the route slopping. The first 4 kilometers of the running route goes downhill.

Where does the Athens marathon finish?

The Athens marathon ends at the magnificent Panathenaic Stadium. Also known as Kallimarmaro, which translates to ‘beautiful marble,’ Panathenaic stadium is a historic stadium that was a venue for the athletics competitions during ancient times.

The stadium was also the finishing point for previous Olympic marathons including the 1896 and 2004 games. For many people who have participated in the Athens Marathon, it is an experience that they will never forget in their lifetime.

The race is considered one of the world’s harshest marathons, and it is entirely running on asphalt. 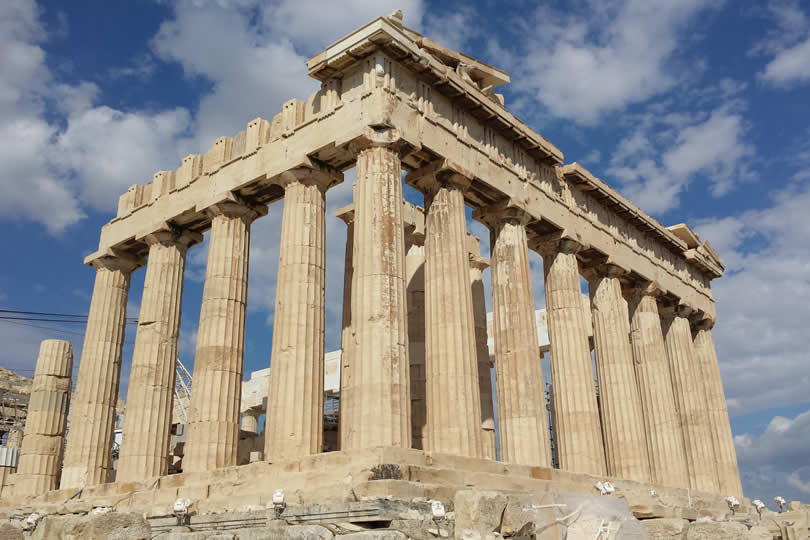 Many hotels are coming up, and the city provides one of the best accommodation services worldwide. There are numerous hotels where visitors to Athens can find accommodation. The city boasts of decent infrastructure with train stations, airports and bus stations serving many tourists who flock the city every year.

The finish is at the center of Athens, previously known as the plains of Attika, which is located at the Old Marble Stadium (Panathenaic Stadium). The venue was used to hold the first modern Olympic games in 1896.

One of the best places to stay is near this Panathenaic Stadium. This will make it convenient for you when traveling from and to the stadium for the games. The stadium is strategic and close to the Athens city centre; hence you will have little trouble finding your way into the stadium.

Apart from this area, you can also choose to choose an accommodation in one of the numerous stops where you can seek accommodation based on what will be convenient for you. The buses will be making stops in different areas from the stadium to the city centre, and there are a few hotels that can offer decent accommodation for you.

If you do not want to spend a lot of time commuting, you could find accommodation in these hotels since they are close to the stadium, and you will be making a short commute daily. These areas can also be convenient for people who will be using taxis or personal cars to find their way into the stadium.

The proximity of these locations to the stadium where all events will occur also ensures that you will not have to deal with all the congestion that people living in the city centre will encounter. You will also be among the first people who will find their way into their hotel rooms in the evening after the games.

The last option you should consider is finding a hotel next to the six departure points where buses will drop and pick people. Staying close to the departure stations is also convenient for people who will use the businesses provided by the organizing committee. Since there are timelines where the buses will be in operations, staying around the departure stations spares you some money and time that you will need to find your way to the station. You will not have to worry about being late or caught up in traffic due to the short distance you will need to cover.

These are some of the best hotels near Athens Marathon running event.

Royal Olympic Hotel is one of the best hotels for Athens Marathon in Greece you can seek accommodation while in Athens. Its proximity to the metro station and its location at the heart of Plaka is heartwarming. From the hotel, the Acropolis and Acropolis Museum are a few minutes’ walks away. You get to dine in the rooftop hotel, which gives you incredible views. The hotel features luxury and huge suites for your comfortable stay in Athens.

The hotel is located in a serene and quiet environment adjacent to the Panathenaic (Kallimarmaro) Stadium. Guests for the Athens Marathon can use the hotel as a base due to its proximity to the stadium and other important ancient monuments. The metro station is just 10 minutes’ walk away while the train and bus stop are 5 minutes and 2 minutes’ walk away, respectively.

The Hilton Athens hotel is located in the metro station’s neighbourhoods, less than five minutes’ walk. It is an upscale hotel that occupies a 1960s building, which is famous for its marble façade. The hotel is located 3.6 km away from the Acropolis of Athens. There are three dining options for visitors: a poolside grill, rooftop eatery, and a chic restaurant. The hotel provides 24-hour services; hence you can check-in and out at your convenience. If you have pets, the hotel allows visitors to check in with them.

The B4B Athens Signature Hotel is centrally located in Athens. It is a six-minute walk from the Acropolis museum. The hotel offers an on-site bar, and there is a smartphone that visitors can use to make unlimited local and international calls. There are a Dolce Gusto coffee machine and a minibar within the hotel. The hotel is a 15-minute walk from the Acropolis Metro Station, which is B4B Athens. The Syngrou-Fix Metro Station is just six minutes’ walk from the hotel.

Athens Marathon Expo is the official and authentic exhibition for the Marathon of Athens. It is a unique and special sport and festival where the participants in the race and the guests interact and know what the Marathon is all about.

It also provides all stakeholders the opportunity to get all the necessary information about the race and familiarize themselves with the products and services available in the fast-changing sports industry.

The venue for the Marathon Expo is the Handball and Tae Kwon Do Olympic Stadium.

Popular in / near Athens, Greece

Book Best Hotels in Athens
Scroll to top
By continuing to browse this site, you are agreeing to the use of cookies, whose purpose it is to provide web analytics and measurements of visitor traffic and browsing behavior. Find out more.