Every year in March, LA in California hosts one of the biggest marathons in the U.S,
the Los Angeles Marathon. Hotels are a crucial infrastructure for any event.
It localises the experience with some acting as the first point of
call to the cultural heritage. Book the best hotels close
to the start or finish line of the 2021 LA Marathon.

An event as big as a City Marathon needs hotels which are strategically placed, compliments the theme, have the best places to stay and has an elaborate transport system.

The best place to stay is in Santa Monica close to the finish line (a free shuttle will take you to the start line).

When : 2021 event postponed – New date to be announced

This boutique California hotel is on the beach... read more

Just 7 blocks from the beach, this Santa... read more

Offering beautiful views of the Pacific Ocean and... read more

Located in the heart of Santa Monica, this... read more

Santa Monica Pier and Pacific Park are within... read more

This ideally situated all-suite hotel is a 10-minute... read more

Offering a full-service spa and rooms with a... read more

Wyndham Santa Monica At The Pier

Located across from Santa Monica Beach and just... read more

The University of California, Los Angeles is 4... read more

Next to Venice Beach and Santa Monica Pier,... read more

Situated on the world-famous Venice Beach Boardwalk, this... read more

AIR Venice on the Beach

Located on the famous Oceanfront Walk, these historic... read more

Situated in a quiet residential neighborhood, this environmentally-friendly,... read more

Hotel Carmel By The Sea

Shutters On The Beach

Located directly on the beach, this Santa Monica,... read more

Located in a Venice beachfront building, each studio... read more

Set in the Santa Monica district of Los... read more

Located within 4.3 km of Getty Center and... read more

Situated in Los Angeles in the California region,... read more

Where to Stay for Los Angeles Marathon ?

The best place to stay for the Los Angeles Marathon is either the start or at the end for various reasons. The main one is being in the middle of the action. Other include the security and shuttle services (depart from in front of Santa Monica City Hall.) to the start line near the Dodger Stadium.

Three of the best hotels in Santa Monica not far from the finish line are the Huntley Santa Monica Beach, The Georgian Hotel and Palihouse Santa Monica.

People who stay near the Union Station are guaranteed shuttle service to the Start line at the Dodgers Stadium. The accessibility to other social amenities, transport network and a host of the best value hotels in Los Angeles. The hotels include Miyako Hotel Los Angeles and Omni Los Angeles Hotel California Plaza. Both Metro Plaza Hotel and Best Western Plus Dragon Gate Inn are budget friendly options. Also, the Union Station is linked to the metro system from the Finish line in Santa Monica, beating the road traffic.

There are a lot of hotels within the 2 miles radius of the Dodger Stadium, several offer free parking. Among hotels nearby include the Royal Pagoda Motel and the Super 8 by Wyndham LA Downtown. The shuttle services between the start and finish line is also a catch. One has to book via the LA Hotel Reservation Centre to qualify for this service. The complimentary deal is the best in terms of prices, time management and convenience. 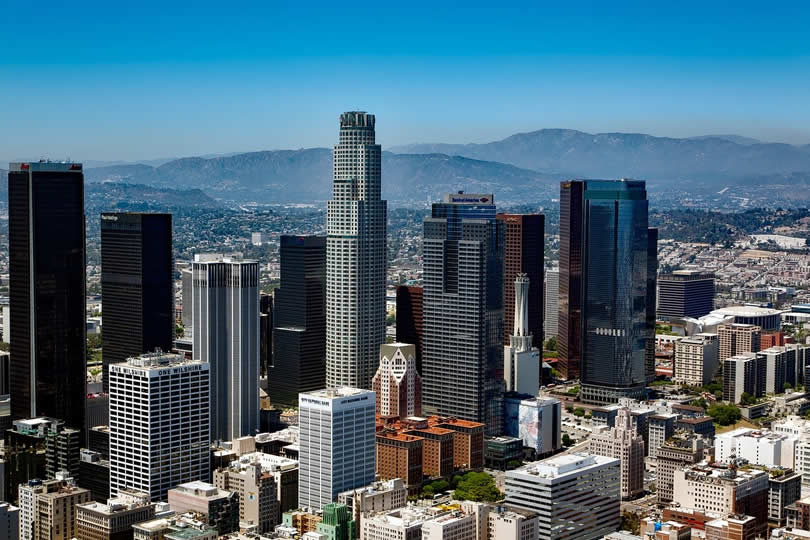 Where does the LA Marathon start ?

Dodger Stadium is the home of Baseball’s side Los Angeles Dodgers. It is one of the prime sports stadia in the entire LA City and the pride of the Elysian Park surroundings. The areas surrounding the venue have hotels where people can stay, shuttling services between the starting and finishing points, and other necessary amenities to support the event. You can opt to book hotels near Dodger stadium with shuttle.

The stadium is divided into the following areas
1. Parking Bay – there are 3 parking lots on the right lanes leading into the Golden State Gate via the I-5 lane. Parking has strict rules on timing and security.
2. Dropping Off Bay – those coming in via the pre-match shuttle will be dropped off at the Parking Lot 4, off the Golden State Gate.
3. Gear Check – housed within parking lot K, the gear check is a screening area for all items used for the marathon.

>Find my LA Hotel near the start line of the marathon

How to Get to Start Line ?

There are various ways of accessing the Dodger Stadium (Start Line). The Race Day Shuttle will be used by participants to access the venue.

The shuttle services to the start line include:-

Where does the LA Marathon finish ?

Overlooking the Pacific Ocean, Santa Monica is a resort hub of the larger LA. The topography is relatively flat and the climate ideal for sporting activities. Its transport system boasts of a light rail and a bus system which eases mobility and movement within the city.

The following areas will be of importance after finishing the race
Secured Finishing Zone – the stretch between Ocean Avenue and the Santa Monica Boulevard will act as the finish zone. Participants will be given the marathon participation medal and some refreshments.
Massage Tent – it will be located south of the Broadway Avenue along Ocean Avenue.
Hotel Shuttle Services – eligible participants will be transported back to their destinations using the hotel shuttles. The buses will be stationed at the Santa Monica City Hall.
Finish Festival – The Santa Monica Boulevard will host the finish party. Beer, music and various entertainment will be served.

The marathon finishes at the Intersection of Ocean Ave & California Ave in Santa Monica, CA 90401.

>Find my LA Hotel near the finish line of the marathon

About The Los Angeles Marathon – 2021

The Los Angeles Marathon attracts people from all walks of life from all over the world. Handling the demand that comes with it forces organisers to be creative and plan for it. Accommodation, food and traffic flow tops the list, which falls directly into the hospitality sector. For the last 35 years the Marathon has been in place, the planning has been accustomed and all the important aspects covered.

The LA marathon is an annual event that usually happens in February or March. The inspiration for this event was the 1984 Olympics in Los Angeles. It got the City on the global athletics map as the infrastructure and the capacity was tested and proven. It was known as the City of LA Marathon before being renamed.

The running tuff is 42.195 kilometres. Over the years, the marathon routes have changed, but the distance has been the same. It averages 25,000 people (runners, volunteers and spectators) per session, making it one of the biggest in the United States.

The LA marathon organising committee has contracted Experient as Housing partner to the Marathon. Accommodation and reservations are centralised using the Hotel Reservation Centre platform. It brings together all hotels within Marina Del Rey, Midtown, Beverly Hills, Santa Monica, Downtown LA and Pasadena.

There are complimentary shuttle services for these guests both to the start and finish line, and back to the hotel. Other benefits include the low accommodation rates, no prior payment at reservation and the best hospitality experience in the West Coast.

Book Cheap Deals for LA Marathon Hotels
Scroll to top
By continuing to browse this site, you are agreeing to the use of cookies, whose purpose it is to provide web analytics and measurements of visitor traffic and browsing behavior. Find out more.