Where to Stay in Brighton UK ? 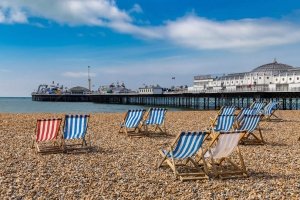 Brighton is a seaside town on the south coast of England. It is part of the cities of Brighton and Hove that were joined up as one in 2001. Apart from being an enticing coastal city, Brighton has a rich history that goes back to the dark and middle ages and a mix of different cultures.

Brighton is your prime vacation location if looking for a great place to relax or enjoy entertainment away from home. It has a mix of relaxation and vibrant lifestyle, the old and modern as well as mixed cultural heritage. There are places for vacation on a budget, family fun and the fine things in life.

What’s the best area to experience the city for the first time, tourists, what’s the best district for nightlife and dining, a beach holiday or where to stay when travelling by train ? Read on below to find out more best neighbourhoods to stay in Bruges Belgium.

What is the Best Area to Stay in Brighton England ?

The Seafront area gives you access to expansive beaches. Most places here have free Wi-Fi and spacious rooms. On the other hand, the Lanes provides a cultural location where you enjoy British tea and awesome architecture. Kemptown is a hippy neighbourhood that enjoys vibrant nightlife, lots of entertainment locations and a relaxed atmosphere. Accommodation at the city centre has options for low budget customers and those that are willing to splash some cash. It is near shopping centres and entertainment joints.

Where to Stay in Brighton UK

If you are taking a loved one on a romantic vacation in Brighton England, there are various locations to stay, depending on your budget. If you are on a shoestring budget, you can got for a Bed and Breakfast. Many have comfortable beds, WiFi and several breakfast options. Several boutique hotels around the city offer luxurious accommodation on a budget. If you are looking for fine dining hotspots around the city, go for any of several luxury hotels in the city.

Kemptown district boasts of a huge young population hence, the high concentration of clubs, restaurants and live performances around the area. You will also find several restaurants and pubs around the neighbourhood. The Lanes borders the sea with lots of daytime and night fun activities. There are many night live performances, karaoke nights and romantic dinner hotspots around the area. You may be staying just a few metres from a club or a favourite pub in the neighbourhood.

Where to Stay when Travelling by Train: Brighton Railway Station

Brighton railway station connects you to London in less than an hour. If you are on a travelling craze around Britain or England for that matter, look for accommodation around the railway stations. There are several travel hotels around the area, from B&Bs to luxury hotels. Apart from being a great place for accommodating travellers, there are several entertainment joints around that will keep you entertained throughout your stay in the city. You can also access prime locations in Brighton fast from your hotel.

The 4 Best Neighborhoods in Brighton for Tourists

Some of the most popular neighbourhoods include North Laines, Lanes, Kemptown, Hanover and Hove.
It takes a 45-minute train from London to North Laines. The neighbourhood was formerly a slum. However, today it is a bohemian and cultural centre of the city. There are over 300 retail shops, pubs, restaurants and open galleries.
Lanes is the neighbourhood to the south of North Laines and bordering the sea. This neighbourhood came to be in the late 18th century. It is famous for arrow lanes, traditional British cafes, pubs and 18th century architecture.
Kemptown is known for its lively nightlife and lots of outdoor art. It is home to the largest LGBT community in the south of London. This is home to delicious modern cuisines and hippy lifestyle. There is even a naturist beach in the neighbourhood.
Hanover is one the coolest neighbourhoods in the city. It used to be a low-income area until the late 1980s. Today, it spots colourful buildings and an awesome hilly landscape. There are pubs scattered all over the neighbourhood along with brew houses, pubs, eateries and other art locations.
Hove is one of the best living areas in Brighton. It has several living quarters, spacious, elegant apartments. Most of the entertainment locations in this area are family-friendly with children activity hotspots around the area. It is a charming little village that borders the great city of Hove.

The Lanes is a magical location for both its cultural heritage and access to the sea. Here, you enjoy the traditional British hospitality, magnificent architecture and pleasant restaurants. There are value hotels and great street food that you may want to give a try.

Travel its narrow lanes while looking for a souvenir or climb the British Airways i360 tower to have panoramic views of the area. There are also hotspots for children’s activities around the area.

Kemptown is the party centre of Brighton. It is also home to the largest LGBTQ community in the region. Visit the location to enjoy some of the best live performances, karaoke nights and romantic dinners.

You can go all out to dance all night or enjoy a cool beer while you watch your favourite football team play on the large screen. In summer, strip down and get a terrific tan on Naturalist Beach.

There are various attractions in the city that include Hove Lagoon, Brighton Open Air Theatre and the Old Market. You can also visit the Hove Museum and Art Gallery for a mix of historical and art exhibits to learn more about the area.

This is an artificial Marina in the city. It is a historical centre with an extensive harbour and seajet. The beautiful location is a great place for sightseeing, boat trips and lots of sea tours.

There are several seafront hotels in the region with entertainment spots scattered around the area. You can also go shopping and enjoy some great food at the beachfront. The inshore harbour looks great from a hotel room afar.

Popular in / near Brighton, United Kingdom

Book Best Hotels in Brighton
Scroll to top
By continuing to browse this site, you are agreeing to the use of cookies, whose purpose it is to provide web analytics and measurements of visitor traffic and browsing behavior. Find out more.