Where to Stay in Liverpool UK ?

Liverpool is a port city situated in northern England. The city has a rich history in trade, shipping and industry. When it comes to tourism, the city has a lot to offer from culture, music, sport and architecture. Liverpool is home to The Beatles and also has a vibrant sports attraction being home to two premiership football clubs, Everton and Liverpool FC. The city also boasts of its connectivity to other parts of the UK and the world through its airports, vast rail networks and buses. 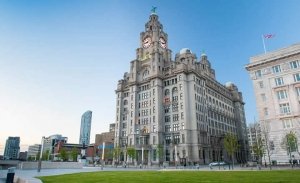 Liverpool is the place to be for music lovers since the city is home to dozens of music venues as well as the famous Liverpool music festival. The Beatles may have set the pace, but the people of Liverpool have also shown their love for music through massive turn-ups for concerts and other musical events.

What’s the best area to experience the city for the first time, tourists, what’s the best district for nightlife or shopping, or where to stay when travelling by train ? Read on below to find out more best neighbourhoods to stay in Liverpool England.

What is the Best Area to Stay in Liverpool ? 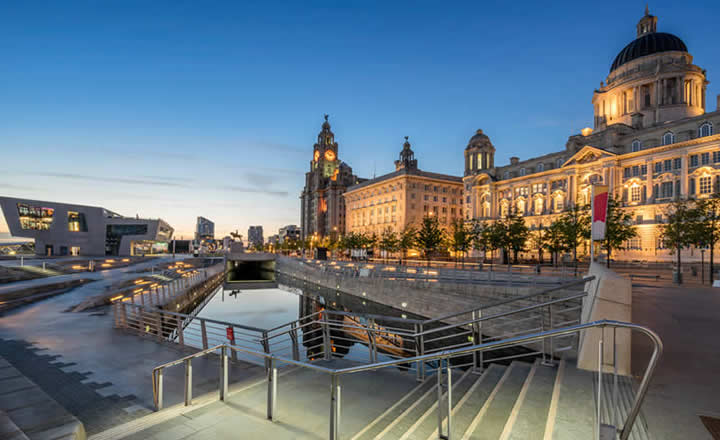 These are the most tourist-friendly areas where to stay in Liverpool UK.

The city centre is the best place to experience Liverpool’s history and culture. Here you can watch the impressive architecture of the traditional buildings that date back to the nineteenth century.

One of the most famous neo-classic style building is St Georges’ Hall and the bluecoat building which dates back to the 18th century. The famous Cavern Club famous for hosting the Beatles for 292 times is also located in the city centre plus many more modern clubs where you can enjoy the city’s nightlife. The World Museum situated in the city centre is home to a lot of UK’s historical artefacts and an extensive Egyptology collection.

What Area to Stay in Liverpool – Map

Best Areas to Stay in Liverpool

A Romantic getaway is most enjoyable when you stay in a serene environment full of fun activities. For such an experience, you can choose your best choice from the wide range of small boutique hotels, B&B’s as well as luxury hotels in Liverpool depending on your budget. A B&B experience is best for couple’s whose focus is to have fun by visiting fun areas out of the accommodation place. Boutique hotels and luxury hotels provide accommodation as well as additional activities such as swimming pools and wellness centre and can be the best choice for couples who focus on spending most of the time inside the hotel.

Where to stay in Liverpool for best nightlife ?  Baltic Triangle, Cavern Quarter, Ropewalks

The Baltic Triangle area has a history as Liverpool’s oldest industrial are but it has now changed to become a modern entertainment hub. The area was formerly home to quiet warehouses that have now transformed into perfect nightlife spots and exciting cafes that are arranged close to each other along the streets. The area is growing very fast hence attracting a lot of locals with whom you can interact in these bars and cafes.
The Cavern Quarter surrounds the Cavern Club in Mathew Street, where the The Beatles became famous. RopeWalks is filled with cafes, bars, pubs, and dance clubs.

The Liverpool open-air shopping district is located in the city centre and close to the waterfront. The area is home to more than 170 stores, restaurants and bars where you can get everything you need from clothing to households. It is a place where you can shop, dine and also have family entertainment. There are always exciting fun programmes for customers all around the year that attract a lot of tourists and locals.

Where to stay in Liverpool when travelling by train ? Liverpool Lime Street, Liverpool Central Station area

The best place to stay when planning to leave Liverpool is near a train station. Living close to a railway station will save you the stress of connecting from other neighbourhoods when it is time to go. Train transport is most preferred by people visiting Liverpool from different parts of the UK due to its high connectivity. Both the Central Station area and Lime Street Station area is full of hotels, serviced hotel apartments or Liverpool aparthotels and B&B accommodations for varying budgets.

The 4 Best Neighbourhoods in Liverpool for Tourists & Sightseeing 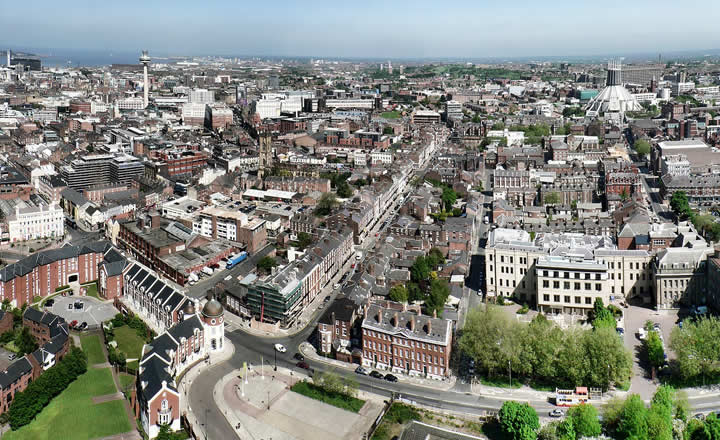 Liverpool city is home for impressive architecture with some as the Oriental Chambers dating back to 1846. Other buildings in the ‘world’s first modern building’s’ category include the Royal River Building of 1911 and the St George’s Hall of 1854.

Liverpool has a wide choice for the best neighbourhood for visitors, but the areas around the waterfront and the city centre are the best. The area has a lot of attraction, such as the museum and the unique architecture. Living in these two areas will give you the advantage of the proximity of the city’s new night clubs, the old school traditional pubs as well as a wide variety of hotels.

The best place to learn Liverpool’s maritime history is the Royal Albert Dock. Here you can visit the world’s first non-combustive warehouse that was built in 1846. The area is one of the most visited landmarks in Liverpool and outside London. The city is also full of cafes, restaurants, museums and galleries for the entertainment of visitors.

Another neighbourhood rich in Liverpool’s history is the Ropewalks area. The area was home to rope making factories in the 19th century as well as Europe’s oldest china tow. Nowadays, the city has changed into a modern shopping and sinning hub out of the town. Below are some of the best areas to stay in Liverpool England. 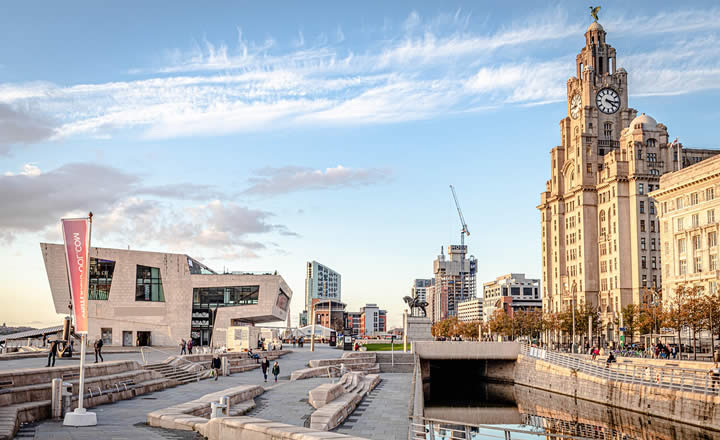 The city centre is the best place to stay in Liverpool as a tourist. This area is home to some of Liverpool’s most celebrated attractions such as the World Museum that has a rich history about the United Kingdom as well as the traditional architecture.

The city centres, nightlife, is unmatched thanks to a large number of pubs and restaurants. The clubs have amazing entertainment activities such as comedy shows and musical performances. The city is also full of cheap or budget friendly hotels where you can enjoy local food as well as cuisines from all over the world. 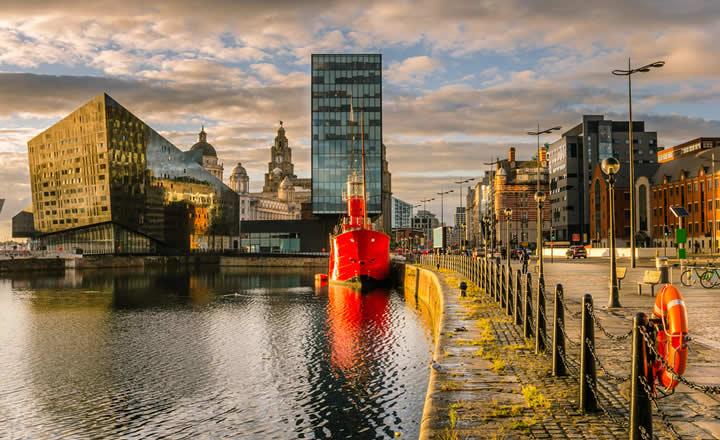 If you are an outgoing person, Albert Dock is the best neighbourhood for you. The area is classified as the trendiest in the city due to the high presence of chain hotels.

The area’s buildings were formerly redbrick warehouses which were later converted into cool food spots and modern night clubs. You will best enjoy the nightlife in this fastest-growing area in Liverpool.

Hope Street is one of the coolest neighbourhoods in Liverpool. The area is home to Hope Street which was once voted the best street in the UK. Hope street runs is in between the Metropolitan Cathedral and the Upper parliament street.

The main attractions in this area are the Georgian Architecture buildings on both sides of the street as well as the Royal Philharmonic Orchestra Liverpool.

Liverpool’s industrial history is best explored in this area due to its famous rope-making industry in the 19th century. The area is an excellent choice for music lovers due to the high number of music shows every year and the presence of a variety of music shops.

There are also street performances by local artists that can be free entertainment during the dull hours of the day. 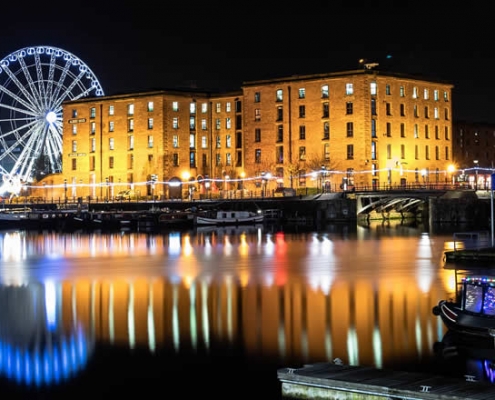 Popular in / near Liverpool, England UK