Where to Stay in Cannes France ? 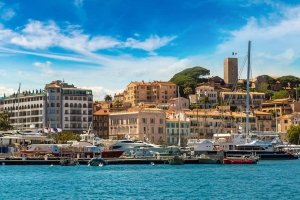 Cannes was once viewed as a sleepy fishing village. But over the years, Cannes has become one of the most sort-after tourist destinations for its beautiful sceneries and incredible range of activities.

Most of the attractions in Cannes are concentrated in the areas between Boulevard de le Croisette one of the best for fashion and glorious view of the gulf, and Lerins Islands. Hanging on the slopes of Mont Chevalier above the bay is Le Suquet district which perfectly paints a picture of the original fishing village.

The city has some of the greatest museums, a big covered market with lots of fresh local produce as well as a phenomenal shopping district.

What’s the best area to experience the city for the first time, tourists, what’s the best district for a beach holiday, or where to stay for Film Festival ? Read on below to find out more best neighbourhoods to stay in Cannes France.

What is the Best Area to Stay in Cannes ?

Le Suquet is one of the best old historic neighbourhoods to visit in Cannes with its ancient walls, narrow staircases and the eleventh century-old watchtower that dominates the sky. From the luxury hotels, you will have an amazing view of the harbour and a great sunbath in the morning from its private balconies. The joy of touring Le Suquet is quiet walks in the picturesque old streets neighbourhood that are well known for speciality gourmet boutiques. Stay in the city centre of Cannes France for a first time visit.

Where to Stay in Cannes City Centre

Best Areas to Stay in Cannes

Are you looking forward to spending your honeymoon in Cannes France? You can book an cosy bed and breakfast room or check into one of the luxury or seaview hotels in Cannes France. Many hotels offer a quiet neighbourhood with proximity to some of the main attraction sites in Cannes such as the famous Palais des Festivals de Cannes. Some properties also offers an airport shuttle service to Nice Cote d’Azur Airport.

In La Croisette, you will have the best view of the Mediterranean Sea on one side. La Croisette Boulevard is one of the most fashionable streets in France. There is a lineup of historic hotels such as Intercontinental Carlton Cannes that also offers selected upscale boutiques. Boulevard stretches from Polais des Festivals to the incredible La Roseraie Park. From the promenade, you will enjoy a great view of the gulf and the Lerins Islands in the distance of the Mediterranean Sea.

In May, the best artists in the world and the celebrities flood the district for photos with their fans. Outside Palais des festival des Congres building, you will find handprints of celebrities embedded in the flagstones.
Palais des Festival in the Old port area is packed with events throughout the year. Just to mention a few, European Musicians and Chopin Piano series, the Marathon des Alpes-Maritimes Nice –Cannes starts ends close to the Palais des festival every November.

Where to stay in Cannes on a budget ? Le Cannet, La Bocca

La Bocca area is located in a residential neighbourhood on the west of Cannes with proximity to attraction sites such as Palais des Festival, which is 2 kilometres away. You will conveniently walk to the beach and back as well as from some of the greatest shopping complexes in the district. Enjoy the sun-bathe as you watch the colourful display of the overflowing fresh market in the morning. Accommodation here is ultimately pocket-friendly in the few affordable hotels. There are several cafes across the street that offers relatively low-cost fast food. Le Cannet is located on the hillside just outside Cannes France.

Mougins and Grasse are only a short drive from Cannes central district. The village of Grasse seats on a hill with spiral streets around the plain. It is well known for fabulous hotels with Michelin star and an annual food festival. One of the places you will not want to miss is the tiny but classical art museum. The neighbourhood is surrounded by old but carefully decorated houses that will offer you some of the best accommodation in the district.
Restaurants and proximity to beaches and golf courses will make you want to stay here for your holiday in France. In some of the hotels, for example, they speak over 42 languages.

The 4 Best Neighbourhoods in Cannes for Tourists

Tourists are marvelled by the historic remnants such as the ancient walls. Mosee de la Castre overlooks Cannes bay on a hill. It is one of the historic monuments previously known as the monastery of Lerins monks. It is a commendable museum which also has classical ancient musical instruments from around the world. Climb to the top of the 12th floor and take a 360-degree panorama view of the Cannes district.

Located next to the Marine Railway station is Cannes port 1 which besides its docking uses, acts as the launching point for the Royal Regatta. On the north of the port is a narrow ancient alley lined with plane trees where the flower market is held every morning.
One of the most famous activities that attract most visitors to France than any other shopping district is the Film Festival. This is an event that recognises artistic achievements especially in the movie industry from the whole world.

You will discover Cannes is a coastline spread across a stretch promenade waterfront with a number of hilly areas.
Cannes business district is generally flat including Croisette and Rue d’antibes. However, Le Suquet, above the old port of Cannes is the only steep place in the business district. If you don’t fathom walking on a steep gradient, there is a train that can get you there. Away from Cannes coastline on the north, it gets hillier but the gradient is gradual. You may choose to board a bus or a taxi for convenience.

Cannes is one of the best romantic cities in France decorated with shopping boutiques and it’s amazing beaches that are a few minutes walk from your favourite hotel.

You cannot afford to miss the most exciting Cannes film festival red carpet. With all the thrill of celebrities, the red carpet event is the best in the city centre which attracts quite a good number of tourists.

Every morning you wake up to a beautiful view of the Mediterranean Sea from your balcony. The convenience of staying here is incredible as walking to promenade de la Croisette shopping malls in the district is just a few minutes. In the night, especially during the Film Festival, you will have such a great view of Palis des Festivals de Cannes with the splendid decorations.

The Old town is marked with historic attractions such as the old church and the 11th century Tour du Mont Chevalier watchtower that dominates the skyline.

One of the greatest fresh markets is located in Le Suquet District in Cannes city with assorted cultural foods for the locals. There are also flowers, meat, seafood as well as olives. Le Suquet has a wide selection of hotels for your stay and good espresso.

Promenade de la Croisette is an area spread over a prominent road with the same name that stretches along the shores of the Mediterranean Sea.

La Croisette promenade is a great area for strolling and people viewing from the splendid private beaches on the shoreline. Spread along are rows of luxury yachts docked at the harbour.

Carnot is one of the best places to visit and stay in Cannes. Take a 15-minute walk to the famous film festival and walk back in the night in the beautifully decorated lights along the streets and take a few more photos.

In Carnot, it is also possible to walk into Cannes business district as you enjoy the beautiful view.

Where to Stay in France ?

Popular in / near Cannes, France

Book Best Hotels in Cannes
Scroll to top
By continuing to browse this site, you are agreeing to the use of cookies, whose purpose it is to provide web analytics and measurements of visitor traffic and browsing behavior. Find out more.