Where to Stay in Cork Ireland ? 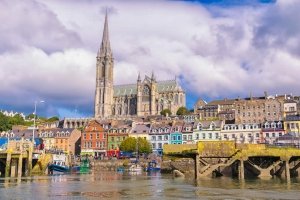 Cork is the second largest city in the Republic of Ireland and part of the province of Munster. The city gets its name from the Irish ‘corcach’ which means marsh. This is apt as the city herself sits between two channels of the River Lee. The city was invaded by the Vikings who used it primarily as a trading port.

Today, you can visit Cork Harbour, which is one of the world’s largest natural harbours. Later, during the 11th Century, the city became a fully walled Medieval settlement, parts of which can still be seen today. During the War of the Roses, Cork became known as the ‘rebel city’, playing host to the great pretender, Perkin Warbeck, and his spectacular failure of a plot to overthrow Henry VII. Since the 19th Century, Cork has been a nationalist city and celebrates all aspects of Irish heritage and achievements, including culture, sport and history.

When deciding where you want to stay and with so many different districts to explore, make sure you know what is going on in each neighbourhood to make the most of your visit. As Cork is a relatively small city, it is easy to access most neighbourhoods as they all lead into one another, which makes it great for both a short city break or a longer holiday with more time to explore.

What’s the best area to experience the city for the first time, tourists, what’s the best district to for dining and nightlife, for students or where to stay when travelling by train ? Read on below to find out more best neighbourhoods to stay in Cork Ireland.

What is the Best Area to Stay in Cork ?

When visiting Cork for the first time, it is best to stay in the city centre in order to get the most from your stay. A great place to begin your stay is the English Market. Once described by Rick Stein as ‘the best covered market in the UK and Ireland’, here you can sample a wide variety of culinary delights from local traders. With a greater focus on organic produce and helping to endorse small businesses, you can get a taste of Ireland as you support the community.
The Cork Opera House is also a fantastic place to visit and has been entertaining the people of Cork since 1855. Featuring world class theatre, comedy and music, the venue is so much more than just opera and there are shows to suit all the family.

Where to Stay in Cork City Centre

Best Areas to Stay in Cork

What’s the best to stay in Cork for romantic trip ? Bed and Breakfast or Small Boutique or Luxury Hotel

Cork makes a lovely destination for couples too. Whatever accommodation your are looking for, from romantic bed and breakfasts, small boutique hotels to luxury spas, there is something for every taste and budget. The Blarney Stone Guesthouse comes top rated by couples and is only a 5 minute walk from the town centre. This guesthouse combines modern comfort with Victorian elegance and is only a short drive from the Blarney Stone itself. Along the River Lee, you can find The Kingsley Hotel and River Lee Hotel. Both these hotels are perfect for relaxation and easy accommodation for accessibility to the sites of Cork. The Castlemartyr Resort Hotel is set within the ruins of an 800 year old castle and is a wonderful destination for those looking to make their stay make them feel like royalty.

Where to stay in Cork for dining & nightlife ?  The English Market, Huguenot Quarter

By night, there is still so much to do in Cork Ireland. The English Market offers plenty of different dining options and the Huguenot Quarter, named after the French Protestants who settled after fleeing persecution, is now considered one of the coolest parts of the city. Here you can find great coffee houses, such as Duke’s Coffee Company, and samples some of the many chocolate shops on French Church Street.

If you are looking to somewhere to study, Cork is great for students too. The University College Cork (UCC) & Cork Institute of Technology (CIT) both offer full time and part time courses, with almost 20,000 students already in attendance.

Where to stay in Cork when travelling by train ? Cork Kent Railway Station area

There are a number of different ways to start your trip to Cork, but when travelling by train it is best to stay in the Cork Kent Railway Station area. This bustling station serves the major cities of South West Ireland and was even one of the locations for the 1979 movie classic, The Great Train Robbery.

The 4 Best Neighbourhoods in Cork Ireland for Tourists

Cork retains much of its Medieval architecture and has two distinctive cathedrals, St Mary’s and St Fin Barre’s. The main street of the city, St Patrick’s Street, (known to locals as Pana), is the main shopping area and has twice won the award for the best shopping street in Ireland. Its curved shaped streets follow the River Lee and lead to another notable area, Oliver Plunkett Street. Here you can find the Theatre Royal, built on the site of an 18th Century amphitheatre constructed by impresario, Pablo Fanque. The Grand Parade runs from St Patrick’s Street to South Mall and is picturesque, lined either side by trees. Alongside shops are offices and the financial district of Cork.

One of the most famous buildings is the Shandon church tower, which can be seen from the whole North side of the city. Built in the 1700s and overlooking the River Lee, some consider it to be the most iconic emblem of Cork. Skiddy’s Almshouse and Cork City Hall are two further examples of buildings that have had an important cultural impact on the city and remain visually arresting.

As with many other popular city destinations in Europe, Cork and Dublin are the rival cities of Ireland, which is particularly notable at Gaelic football matches!

The City Centre hosts the cultural hub of the Cork Opera House, with different shows on offer all throughout the year. The English Market is a great place to eat, drink and catch up with friends.

North of the River Lee is the Victorian Quarter neighbourhood. The city has reinvested heavily in the area and it now boasts new attractions and festivals. Most notable is the Soul in the City Festival which combines soul music with great food.

The neighbourhood of Shandon sits North of Cork City Centre. It is part of the old fort and was almost destroyed during the Seige of Cork, 1690.

Tourist attractions include St Anne’s Cathedral, offering impressive views of the city, and the home of Annie Moore, the first migrant processed on Ellis Island.

Cork Kent Railway Station is the fifth busiest station in Ireland and serves all major towns on the Cork to Dublin mainline. From here, you can also easily access Kerry Airport, ideal for tourists.

Popular in / near Cork, Ireland

Book Best Hotels in Cork
Scroll to top
By continuing to browse this site, you are agreeing to the use of cookies, whose purpose it is to provide web analytics and measurements of visitor traffic and browsing behavior. Find out more.