Where to Stay in Dublin Ireland ?

Dublin, the capital of Ireland as well as its largest city, is one of the top tourist destinations in Europe,
and for good reason. Situated at the mouth of River Liffey and bordering the Wicklow Mountains towards the south,
there is so much for you to explore in this vibrant city, from the charming pubs to the elegant architecture
and rich history. Furthermore, Dublin is quite accessible, and you can go sightseeing on foot.

Don’t know Where to stay in Dublin ? Read on below for best tourist neighbourhoods. 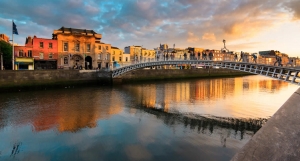 The city is divided into a number of distinct neighbourhoods, each with its own fascinating attractions. Temple Bar District is a famous Dublin neighbourhood with some of the most iconic pubs and cultural spots in Ireland. Christchurch is a well-loved area in Ireland at the heart of Dublin. Apart from exploring the historic Christchurch cathedral, you will also love the Dublin Castle and Guinness Storehouse, a walking distance from the neighbourhood.

The Ballsbridge and Donnybrook area is home to Dublin’s main rugby arena, as well as pubs where you can watch the sport. It is relatively quiet, with popular restaurants and old family homes. St. Stephen’s Green is an area with elegant architecture and a timeless air. This neighbourhood has some of the best hostels in Dublin with readily available accommodation.

The Drumcondra neighbourhood is situated in the north of the River Liffey, and is the place to watch a match at the Croke Park, Ireland’s largest stadium.it is easy to find a place to stay here since accommodation is cheap. Dun Laoghaire is a picturesque neighbourhood just 20 minutes from the city centre best known for sites such as the James Joyce Tower and Museum and the Maritime Museum. Depending on the purpose of your visit, these neighbourhoods cater to all sorts of interests and budgets.

Dalkey is a sleepy seaside area at Dublin Bay, a short distance away from the city centre, with plenty to offer, from the stunning Killiney Hill where you can go hiking to the Dalkey Castle and Heritage centre where you can learn the castle’s history and take fun tours. Grab a bite at one of the sensational seafood restaurants or simply have a drink at one of its pubs.

Malahide is another quaint seaside neighbourhood that will provide you with a great getaway from the hassle of the city. It is home to the Malahide Castle as well as a number of parks and botanical gardens. It is the perfect place to stay if you want some peace and quiet.

What is the Best Area to Stay in Dublin ?

The Dublin City Centre is a great place to start if you are visiting for the first time. Take the Historical Walking Tour of Dublin to learn about the fascinating Irish history or spend some downtime in the stunning Iveagh Gardens. A couple of minutes from the Dublin City Centre is the Temple Bar District where you will find historical landmarks such as St. Patrick’s Catedral alongside iconic pubs. Get to do some of the best shopping in Grafton Street and enjoy the historical sites of the Old Town. Christchurch is teeming with pubs and some of the best restaurants in Dublin. The 1000-year-old Christchurch Cathedral, with attractions such as the Book of Kells in Trinity College and Dublin Castle within walking distance. O’Connell Street is a great place to polish up on your Irish history lined with memorials dedicated to Irish leaders.

Where to Stay in Dublin City Centre

Best Areas to Stay in Dublin

Where to stay in Dublin for best nightlife and young travellers ? Temple Bar District

Temple Bar District is one of the most popular areas in Dublin, especially at night. Fully dedicated to entertainment, art, and gastronomy, Temple Bar is the best place to be if you want to hear live Irish folk music. During the day, pay a visit to the art galleries and other creativity hotspots such as the Irish Film Institute, the DESIGNyard, and the National Photographic Archive. At night, the district transforms into a rowdy party destination. However, due to overcrowding, finding a place to stay is quite difficult, plus the available hotels are overcrowded. Your best option is to find accommodation just outside the district.

The St. Stephen’s Green area is renowned for its beautiful Georgian architecture and historic brick townhomes. Admire the picturesque homes south of Butt Bridge and enjoy the serene atmospheres in the quiet and well-maintained parks. Phoenix Park area is well worth a visit with many interests such as the Dublin Zoo, the oldest in Ireland with a wide variety of animal species, the Papal Cross, where outdoor masses are occasionally held, and monuments such as the Wellington Monument and the Phoenix Column.

Ballsbridge is home to the rough-and-tumble sport of rugby with Dublin’s main rugby arena found in the area. You can choose to watch a game in Crowe’s Pub, one of the oldest and well-known rugby pubs in Ballsbridge. Drumcondra is an up and coming area in Dublin where you can catch a match at Croke Park if you are an avid sports fan. After watching a game, grab a bite to eat at one of the many restaurants. Hotels near Croke Park here are also relatively cheap, so you take care of when it comes to accommodation.

Parnell Square is situated towards the northern end of O’Connell Street and is famed to be one of the finest Dublin Georgian Squares. A major shopping district, Henry Street, is a 5-minute walk from Parnell Square. O’Connell Street is one of the wider Dublin streets. It is a busy shopping district and is one of the best places to conduct an afternoon shopping spree. Grafton Street is a principal shopping street with many popular high-end retail stores. As you shop, enjoy some amazing performances from street buskers.

Where to stay in Dublin on a budget ? Trinity College area – Phoenix Park (or stay in guesthouses or good quality B&Bs, or hostels)

Are you on a tight budget during your vacation? Drop in on Trinity College at the heart of Dublin. Trinity is perhaps most famous for being the home to the breathtaking Book of Kells. Check out the Douglas Hyde Gallery while you are here as well to view the contemporary exhibitions. Phoenix Park is another great place to go to on a budget. Explore the Ashtown Castle, a restored medieval tower house, which holds the distinction of being the oldest building in the park. After a day at the Dublin Zoo within the park, children can play at the playground at People’s Gardens.

The 5 Best Neighbourhoods in Dublin for Tourists First Time Visit

The southern side of the Dublin City Centre is full of amazing areas to explore, such as Temple Bar, a tourist hub. Apart from revelling in the nightlife in classic Irish pubs such as Teac Na Ceibe, pay a visit to the Meeting House Square during the day. If you are lucky, you might catch a free concert there.

Trinity College is home to the stunning Book of Kells, the world famous medieval manuscript and one of Ireland’s greatest cultural treasures. Grafton College is a great place to buy souvenirs due to the numerous high-end street shops.

Towards the north of the City Centre, O’Connell Street is another great place for retail therapy. Apart from shopping, the monuments on O’Connell Street are also fun to explore, from the Spire of Dublin to the Daniel O’Connell Monument, who the street is named after.

Apart from the aesthetic Georgian architecture of Parnell Square, enjoy the cultural offerings as well such as the Dublin City Gallery, the friendly locals and the rich historical background of the area.

Temple Bar District has so much more to offer other than a great night out. The area is also home to high-end restaurants and cafes. Drop in at the Queen of Tarts for mouthwatering cheesecake, and eat tasty chicken wings at Elephant and Castle.

Enjoy indie films at the Irish Film Institute or take in the unconventional art at Temple Bar Gallery and Studios.

Hotels here are in plenty, offering reliable accommodation and guaranteeing a comfortable stay in the city.

Malahide is a fascinating seaside suburb with the feel of an Irish village. Not too far from the city, Malahide is best known for the charming Malahide Castle and botanical gardens.

Howth is a picturesque coastal town, home to the Baily Lighthouse. Take a walk on the Howth Cliff Path Loop while you are here as well. Dun Laoghaire is a harbour town a couple of minutes from the city centre. While you are here, visit the Dun Laoghaire’s Maritime Museum and enjoy a day of shopping on George Street.

Dalkey is a tranquil seaside town where you can catch a ferry to the Dalkey Island, or visit the fantastic Norman Castles. The beautiful Skerries is a coastal town where you can visit the striking Ardgillan Castle as well as a kayak to the St. Patrick’s and Colt Islands.

Popular in / near Dublin Ireland

Book Best Hotels in Dublin
Scroll to top
By continuing to browse this site, you are agreeing to the use of cookies, whose purpose it is to provide web analytics and measurements of visitor traffic and browsing behavior. Find out more.