Forget Paris, Marseille, and Lyon– Bordeaux is a city in France with everything (and, nowadays, it is even simpler to get to). Spoil yourself with the best spa and dining experiences in Bordeaux at the InterContinental Bordeaux Le Grand Hotel however the most luxurious and best properties in the city are some boutique hotels such as the Yndo Hotel and Hôtel Le Palais Gallien. Also, there are other best hotels in Bordeaux in the city centre, near the train station, airport, etc.

Best Area to Stay in Bordeaux France For First Time Visit ?
The best area to Stay in Bordeaux for first time is the city centre (Old Town, Les Grands Hommes District, Les Chartrons). Les Chartrons is undoubtedly one of the most preferred area for those arriving in Bordeaux city. Very near to the city centre, between the Quinconces and the Bassins à Flot, Les Chartrons might be termed as the Bordeaux’s Soho. It is exceedingly cherished for its village feel whereas still being a short distance from the most exciting part of metropolitan.

What are the Best Hotels in Bordeaux ?

Ornamented by the renowned designer Jacques Garcia and opposite the “Grand Théâtre,” in the middle of the city, The Intercontinental Bordeaux – Le Grand Hotel is coming in as an exceptional product. This top property has 150 guest rooms counting 22 impressive suites. The Grand Hotel provides a beautiful alternative of unforgettable gastronomic moments. Every guest can select between the gourmet restaurant Le Pressoir d’Argent, La Brasserie Europe, Le Victor Bar, and the winter garden L’Orangerie. This far-fetched experience is completed with a spa, four spacious foyers, and 13 outstanding meeting rooms, making a total of 10,000 Sq: Ft, valet parking, and concierge services.

Providing air-conditioned rooms in Saint Jean Station District of Bordeaux, the Golden Tulip Bordeaux Euratlantique is only 1800 metres from the Saint-Michel Basilica. Among-st the numerous facilities of this superior hotel are a bar and a terrace. The accommodation too has a 24-hour front desk. Featuring a private bathroom, the rooms at Golden Tulip Bordeaux Euratlantique likewise have a town view. Each morning a continental breakfast is served at the property. Their in-house eatery focuses on French and Grill/BBQ cookery.

Discover the innovative Radisson Blu Hotel in the Bordeaux city centre, situated in walking distance of the affluent Chartrons region, recognised for its vibrant cafés, restaurants, and shops. Set by the picturesque Garonne River, the Bordeaux hotel has 125 rooms and suites equipped with a wide variety of unsurpassed amenities, counting 24-hour room services. It is the perfect place for both leisure and business travellers visiting this iconic port city.

The Hilton Garden Inn Bordeaux Centre is positioned in the middle of Bordeaux France, the wine capital of the globe. The Bordeaux Saint-Jean train station is inside walking distance of the property permitting guests to discover the Bordeaux area effortlessly. The Cité du Vin Museum, Opéra National in addition to the Bordeaux Métropole Arena are only a 10-minute tram ride away, whereas the Congress Centre is just 20 minutes away.

Placed in Bordeaux, 1312 feet from Bordeaux Wines Museum, the deluxe Hotel Vatel has air-conditioned rooms. Visitors can enjoy on-the-spot restaurants. Individual units have a seating area to unwind in following an eventful day for the guests. Selected units include sights of the city or Garonne. For your relaxation, you shall find slippers and bathrobes. You shall also have access to a 24-hour front desk at the property.

Positioned at the corner of the Rue de Sèze and Allées de Tourny in Bordeaux, the Hôtel de Sèze, a renowned local landmark, is enchanted to welcome guests to their 4-star property. The gorgeous 18th century Hôtel de Sèze, with its well-lit façade, wrought-iron balconies, and impressive corbels, proudly stands out from nearby buildings. This inconspicuously well-designed hotel has 55 rooms (counting three suites) that mix attractive 18th-century decoration with high-class furniture.

Owned by renowned winemaker Bernard Magrez, who possesses four grands crus classés châteaux in Bordeaux area, this sophisticated six-room hotel occupies an attractive 18th-century limestone villa in serene residential vicinity outside the Bordeaux’s city centre. It display cases the area’s wines and has an outstanding two-star eatery with seasonally varying menus supervised by Pierre Gagnaire. Comfy rooms are ornamented in an old-style French bourgeois flair with fabrics from Braquenié and Pierre Frey, toiletries by Guerlain and furniture by Moissonnier.

What are the 5 Best Boutique Hotels in Bordeaux ?

A new, classy, tranquil five stars sanctuary has opened in the middle of Bordeaux France, where in your happiness and cosiness are the precedence. Inside the stress-free, friendly setting of this symbolic 19th Century Bordeaux mansion, you shall be thrilled and appeased by the twelve rooms plus suites, with their exclusive, eccentric decoration. This top hotel provides a scented garden, shady terrace, home-made breakfast, and dining room to make your stay memorable, in a setting of refinement and luxury.

This extravagance 5-star hotel, Hotel Le Palais Gallien, situated in Bordeaux’s remarkable centre, submerges you into a subtle world of refinement and elegance. Hotel Le Palais Gallien is simply the only luxury property in Bordeaux to provide such a wide-ranging assortment of high-class facilities in the same premises: twenty-seven luxury rooms plus suites from 25 to 60 m² several with private verandas equipped Jacuzzis, a cocktail bar and lounge, a gourmet restaurant, recreation areas and dedicated workstations counting an outdoor swimming pool, a library, a concierge and a rooftop terrace. It’s one of the best boutique hotels in Bordeaux.

Found in the middle of Bordeaux City Centre, the hotel des quinconces is an apt spot from which to explore Bordeaux. From here, visitors can exploit all that the buoyant city has to proffer. With its suitable location, the hotel offers stress-free access to the region’s must-see attractions. Benefit from a wealth of unsurpassed amenities and services at this Bordeaux hotel. To name several of the hotel’s facilities, there is 24-hour security, 24-hour room service, a fireplace, and daily housekeeping.

Hidden out of view, behind the inconspicuous frontage of an eighteenth-century villa is the Hotel Cardinal, a graceful mansion made up of 10 individualised top suites, where in each visitor can feel at home plus enjoy total privacy. The Hotel Cardinal discloses a character of its own, supplemented with a distinctive atmosphere and a new elucidation of classic cuisine codes. Deluxe materials, like brass, marble, and velvet are combined with modern-day furniture for a cosy and warm atmosphere.

Positioned in an 18th-century house, Hotel de Tourny is found in the middle of Bordeaux notable district. After touring the city, visitors can unwind in the courtyard of this stylish property boasting a hassle-free atmosphere and providing concierge service. Highlighting light grey tones plus a design décor the Hotel de Tourny well-designed rooms are all air-conditioned. They all possess a private bathroom featuring bathrobes and premium toiletries.

Effortlessly accessible, the hotel the Best Western Plus Gare Saint Jean is located facing the Saint-Jean train station, 5-minutes away from the centre of Bordeaux plus the Bypass. To make smooth your movements, the property is served by their new streetcar. You shall be fascinated by the decent Bordeaux Architecture belonging to the 18th-century. All staff at the Best Western Plus Hotel Gare Saint-Jean is available to assist you to discern them.

Bordeaux–Mérignac Airport (BOD) is a worldwide airport in Bordeaux, located in the Mérignac commune. Consistent with the data from 2015, this airport served more than 5 million people, making it the 6th busiest in the nation. The airport features three passenger terminals – A, B plus Billi. One can reach the town centre by using the Navette Shuttle 30’ Direct, which runs daily from the airport to the train station (Gare de Bordeaux St. Jean).

An attractive building with 149 rooms and stylish design, the hotel is a true peaceful refuge only a short distance from the Bordeaux airport. Perfect for business tourists, owing to its 12 conference rooms, this hotel similarly promises stunning moments of recreation at its terraced bar and restaurant. A free shuttle service linking the hotel and the airport is obtainable. Located only 20-minutes from Bordeaux France, exploit the Mercure Bordeaux Aéroport hotel and get time to explore the unique culture of this UNESCO World-Heritage city.

What is the Best Cheap or Affordable Hotel in Bordeaux ?

Succumb to the allures of France’s “Sleeping Beauty” inside a brand new suburban hotel. Established in 2017 the Residhome Bordeaux aparthotel is situated in the middle of the Chartrons remarkable quarter, on the Garonne banks. The hotel is a perfect setting to copiously enjoy the metropolitan over the weekend tour with family or on a business tour. Recognised as a UNESCO World Heritage Site, the Bordeaux’s city centre is well-known for its graceful historical monuments and façades. The Residhome Bordeaux suburban hotel welcomes you right in the middle of the celebrated Chartrons quarter. For your cosiness, they have 97 furnished rooms, ranging from studios to one bedroom units with private bathrooms and completely-equipped kitchens. It’s one of the best affordable hotels in Bordeaux France.

You are not long in Bordeaux city before discerning that all its centre – and half the whole metropolitan – is a Unesco World Heritage site. The compliment is in acknowledgment of the accord of its conventional and neo-classical architecture plus the urban development. It is what you tour Bordeaux to experience – then employ as a setting for cultured drinking and eating. The critical lure is the Cité du Vin, a ground-breaking and captivating overview of the whole subject of wine, not just of Bordeaux, however of the entire globe. The area has some other decent museums and galleries; nonetheless, after you have completed the Cité du Vin, the real charm is the metropolis itself. Take it at a chic pace.

What are the Best Hotels in Bordeaux Wine Region ?

Bordeaux is the unquestionable king of red wine. The area has been nurturing vines for over 2,000 years and has maybe the best fame for fine wines in the whole planet. The Bordeaux vineyard designation is one of the biggest in France. Even if the region is well identified for its red wines, a diversity of both red and white wine is manufactured here. Red Bordeaux wines are sophisticatedly styled with safe tannin levels that advance a characteristic subtlety and softness with age. Their age merit makes them perfect wines for cellaring and collecting.

Outstanding Hotels near University of Bordeaux in France 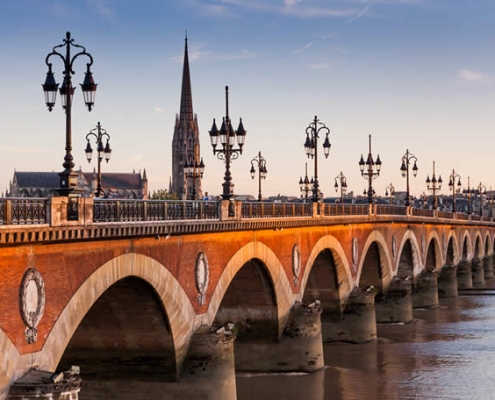 Popular in / near Bordeaux, France

Book Best Hotels in Bordeaux
Scroll to top
By continuing to browse this site, you are agreeing to the use of cookies, whose purpose it is to provide web analytics and measurements of visitor traffic and browsing behavior. Find out more.