Since many years the thrilling and tough Ironman World Championship has been held
every year in Hawaii. A host of Ironman triathlon qualification races are held
throughout the year and then this one is the culmination of these races.
Book the best hotels close to the start or finish line of the
2021 Ironman in Kailua-Kona on the Big Island.

Choosing the right accommodation is more complex than just a comfortable bed and good food for your stay. To perform at your best, the entire culture and environment of the hotel need to be considered for a pleasant, workable stay. A good option also is staying in a vacation home or apartment.

The best area to stay is Kailua Kona close to the start & finish line, not far from Kona International Airport. Book the best Hawaii Ironman Hotels.

Aston Kona By The Sea

Overlooking the Pacific Ocean, this resort in Kailua-Kona,... read more

Kuleana Apartment, a property with a garden and... read more

Where to Stay for Ironman, Big Island of Hawaii ?

You want to book early for accommodation in Hawaii so you get to stay in accommodation as close to the race as possible. At first, the race was held in Oahu but it was later moved to the Big Island in the year 1981.

The Big Island is the biggest, most volcanically active of the Hawaiian islands with its Kilauea volcano. It is a huge tourist destination because of its beautiful nature and array of amazing activities to take part in. It makes sense that the Ironman race was moved to Big Island as it is ecologically diverse and sparsely populated. It is also well known for its spectacular Hawaii Volcanoes National Park.

The race is made up of the three legs – open water swim in Kailua-Kona Bay, the bike ride over the Hawaiian lava landscape to Hāwī and back and the marathon from Keauhou to Keahole Point and back to Kailua-Kona. So, the start and finish of the race is in Kailua-Kona.

If you are headed to Big Island for the Hawaii Ironman, make your travel plans early. The best hotels are the ones that will appeal to your unique requirements at this time. What do you consider the best location?

Being just a few minutes from the start or finish of the race or being tucked away in some secluded area away from all the buzz this event creates? Whatever it is, the splendid mix of hotels, guesthouses, rental apartments and self-catering options and each one tries to capture the very essence of this race over the September to November race-season in Hawaii.

The best area to stay is Kailua Kona on the Big Island close to the start & finish line. The city is not far from Kona International Airport.

If you are swimming and cycling a good distance and then still completing a marathon, it goes without saying that as an ironman, you are going to require a stay at the best accommodation in Hawaii. A good hotel will certainly need to cater for guests with specific dietary needs and also provide the right training facilities and maybe even with a wellness spa. 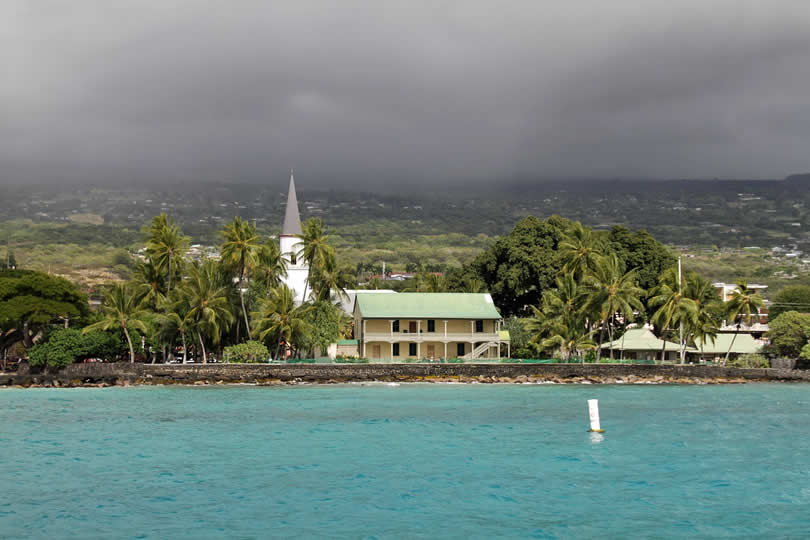 Where is the start and finish of the Ironman in Hawaii ?

The race in Kailua-Kona starts early in the morning when it is still cool. Starting time for the race is at about 6.30 a.m. and this is when the male professional plunge into the water from the Kailua Pier.

After they have completed all three stages, the first male winner is expected to run over the finish line on Aliʻi Drive at about 2:30 p.m. The first female to take part is usually expected to finish an hour later. There is a strict 17-hour time limit in which the participants need to finish the race and there are some athletes who use this as the race is renowned for its harsh conditions.

It is the ultimate triathlon event and for its setting and the fact that it offers some of the best hotels around it is regarded as one of the most prestigious events in the world to win. Of course, the event also attracts many tourists and supporters and it is why if you want to book into the best hotels in Hawaii at this time of year, you need to book early.

If you want to be in on all the action throughout the 17 hours that the race is on, some of the best hotel accommodation for the Ironman triathlon is actually located on the well-known Alii Drive, which winds down from the pier which is the starting point of the race.

The Ironman World Championship focuses on the strength, endurance, courage and dedication of all the athletes who take part in this great athletic feat.

You have to be super fit as the series of long-distance races can be grueling, including a 2.4-mile swim, a 112-mile bicycle ride and a marathon of 26.22-mile and completed in that order.

This race is a grueling test of people putting mind and body to the test. Such excellence is appreciated by people the world over and it is a time when cameramen fly in from all corners of the world to film the event. It is not surprising that this is one of the most popular endurance competitions in the world because of it happening in a beautiful island paradise and each part of the race takes place in amazing areas.

September to November is when the race usually takes place and these are hot months to stay in Hawaii as an ironman. September particularly is a fantastic month to visit Hawaii.

It is fairly quiet in Hawaii in September so a cheap stay is a possibility, and even the best hotels in Hawaii such as Big Island Retreat, Hale Maluhia Country Inn and Four Seasons Resort Hualalai are going to be more reasonably priced.

If hotels are not your style, there are also some good cheap guest houses to stay at and they offer a home-from-home experience. The Kailua-Kona airport, KOA-Kona International, is also conveniently situated about 11 miles from the city center.