Hotels near to Mt Vesuvius

Various hotels or bed and breakfasts are located in the volcanic hills of the Mount Vesuvius area, set in the Vesuvio National park. Some places to stay offer rooms with balcony. Ercolano’s archeological site and Ercolano Scavi Circumvesuviana Train Station, for trains to Naples, Pompeii and Sorrento, are located within easy reach of these hotels.

Mount Vesuvius is located just east of the city of Naples in Italy. It is the only volcano on the continent of Europe to have erupted in the last one hundred years, though other volcanoes have erupted on islands in the Mediterranean Sea. In 1631, approximately 3,000 people were killed by an eruption from Mount Vesuvius.

Below are some of the best hotels close to Mount Vesuvius in Italy.

Best hotels near Vesuvius in Italy

Hotel Augustus is set in Ottaviano, in Vesuvius... read more

Le Fumarole is in the volcanic hills of... read more

Offering a terrace with sun loungers overlooking the... read more

Tenuta Le Fornacelle is located in the countryside... read more

Featuring a garden with terrace and free private... read more

Since 1631, the 4,200 foot high volcano has erupted at least 21 times. Mount Vesuvius is considered particularly dangerous because today, nearly three million people live in the direct path of a potential future eruption.

Mount Vesuvius is most famous for its landmark eruption in the year 79 AD, which buried the cities of Pompei and Herculaneum in layers of burning ash. The only account of the eruption that survives is from Pliny the Younger. From his dramatic account, scientists believe the cloud of ash he witnessed descend upon Pompeii was 20 miles high. The city of Pompei was completely buried. It was rediscovered in 1748, more than 1600 years after the eruption.

The people of Pompeii were found buried under 12 layers of soil. Many of the buildings were amazingly well-preserved, as were the bodies of those who were just going about their daily routines when the eruption occurred. The ruins at Pompeii have provided archaeologists with valuable information about how people in the Roman Empire lived. Today, Pompeii is one of the most visited sites in Italy.

Location Mt Vesuvius : Mount Vesuvius is located close to the city of Naples Italy. It overlooks the Bay and City of Naples and sits in the crater of the ancient Somma volcano. The mountain lies in Vesuvius National Park or Parco Nazionale del Vesuvio, which is centered around the volcano. Book the best and cheapest deals for accommodation nearby.

From the area you can easily reach the Amalfi Coast (where to stay?), Positano hotels and the best Sorrento hotels. 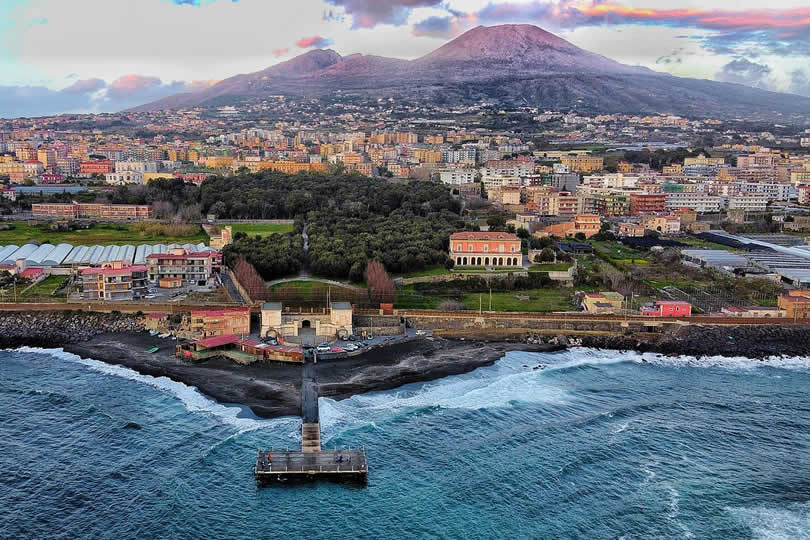 Train Station : You can take a taxi to Vesuvio Natl Park from Circumvesuviana train station in Ercolano.

The nearest train station for Pompeii is Pompei Scavi, located on the Circumvesuviana Napoli-Sorrento line.