YYou will find plenty of good value accommodation and hotels in the surrounding areas, or across the city. With Hannover’s good transport links, wherever you choose to stay you’ll be within a short travelling time of the trade fair centre.

Hotels of all price ranges and level are available in the immediate vicinity of the Hannover Fairground, or within a short journey on the city’s extensive and efficient local transport network. Chain hotels provide accommodation at mid-range prices, offering guaranteed quality, comfort and service, with some also offering bed and breakfast deals, on-site fitness suites, shuttle services and restaurants.

Check out the best hotels near Hannover Messe and TUI arena.

Located directly at Hanover Trade Fair and the... read more

This family-run hotel is situated in the heart... read more

Located directly next to Hanover’s Exhibition Centre and... read more

This hotel enjoys a convenient location and great... read more

This hotel is located only 9 minutes’ drive... read more

Set in Hannover and only 5 km from... read more

Situated in Hannover in the Lower-Saxony region, with... read more

Set in Hannover in the Lower-Saxony region, Apartments... read more

Situated in Hemmingen, maggies-home-hannover has a terrace. The... read more

Located in Hannover, within 2.9 km of TUI... read more

Situated in Hannover, within 2.3 km of Lake... read more

Hanover, or Hannover – the German spelling, is a large city and the capital of Lower Saxony. Although it has plenty to offer tourists and city-break visitors, Hannover is often known as exhibition-city, hosting some of the world’s largest trade fairs. The site for the Hannover Messe Exhibition Fairground is located in the Mittelfeld district of the city.

Just as many are expected for the next exhibition, planned in the next years, so it is best to research and book your exhibition accommodation early. The site was originally an aircraft works, and first used as a trade fair site by the British military in the immediate post-war years of Allied-occupied Germany.

The first fair was held in 1947, with the aim of boosting the economy of post-war Germany, and has successfully taken place every year since.

Today the Hannover Messe Trade Fair covers all areas of industrial technology, including Industrial Automation, Energy, Digital Technology, Industrial Supply, and Research and Technology. The line-up of exhibitor’s stalls is supported with a programme of workshops and seminars, as well as full catering services of restaurants and bars.

Whatever your exhibition budget you’ll find something to suit, starting with hostels, B&B’s, apartments for rent and reasonably priced hotels. If you’d like to splurge on more luxurious accommodation for your visit to the Industrial Trade Fair, then look out for high-end four and five star hotels.

Location — Hannover is the capital of Lower Saxony in Germany. Hanover calls herself the “EXPO City” or “Exhibition City” (EXPO Stadt/Messestadt).

Messe Hannover Exhibition Centre is located in the in the Laatzen district of Hanover, next to the TUI arena.

Air Connections — Hannover is served by Flughafen Hannover (Hanover-Langenhagen airport). There is a train that runs twice-an-hour (called the S-Bahn) from the airport to the central station (Hauptbahnhof). 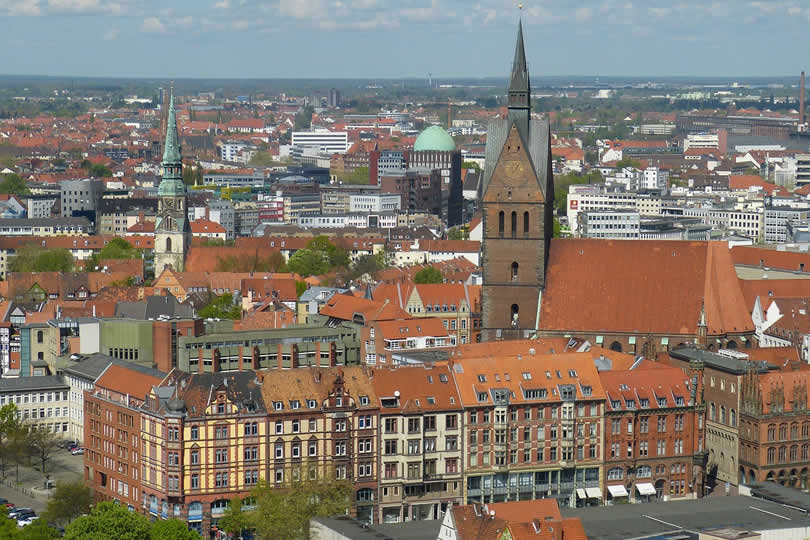 Discover more about the city

In between enjoying the exhibition’s stands, discovering more about your field of expertise, and networking with industrial colleagues, find some time to visit the attractions of Hannover, such as the Schloss Marienburg, the Sea Life Aquarium and a world-class choice of museums, including the Historical Museum, the Sprengel Museum and the Kestner Museum, with its fascinating and ancient artefacts from Ancient Egypt, Rome and Greece.

If you get the opportunity, enjoy some classic German opera in the luxurious surroundings of the Hanover Opera House.