Kazan is the place visitors head to for rich insights into the history of Russia, but it also a city that offers a unique modern experience. Kazan is home to the historic kremlin that towers over the city, giving way to a spectacular view overlooking the Volga River.

Fans visiting one of the largest countries in the world to be a part of a spectacular event at the Kazan Arena can opt to stay close to the football stadium. Plenty of good value hotels can be found within easy of the Kazan Arena. Stay in the best hotel, hostel or self catering apartment. Check out the best properties below.

The Riviera is a modern 4-star hotel in... read more

The Gulf Stream Hotel is located a 3-minute... read more

The Shalyapin Palace is a 4-star hotel, centrally... read more

Hotel Art is located in the centre of... read more

Located in the city of Kazan, Bulgar Hotel... read more

AMAKS Safar Hotel is set in a high-rise... read more

Located opposite the Jalil Opera and Ballet Tatar... read more

In Kazan’s historical centre, this hotel is quietly... read more

Offering a fitness centre, an indoor pool and... read more

An indoor pool, sauna and gym are offered... read more

Being the part of the American Ramada chain... read more

This hotel is located in the central part... read more

Located near Lake Nizhniy Kaban, Karat is only... read more

Capital Hotel is located in Kazan and offers... read more

Ostrovsky Hotel is located in the centre of... read more

Located a 2-minute walk from Al-Mardzhani Mosque on... read more

Located in the heart of Kazan city, the... read more

Located in Kazan, a 3-minute walk from Tatneft... read more

Raymond Hotel is the centre of Kazan, 900... read more

Well set in the centre of Kazan, Mini-Hotel... read more

Attractively situated in the centre of Kazan, NEO... read more

If you’re one of those die-hearted football fans or even a first timer travelling on a budget and is a bit concerned about accommodation, there’s no need to worry.

We speak your language and will help you enjoy your stay in Kazan at any of the best cheap hotels near the football stadium. We’ll also share with you a few great tit tats about Kazan just so when you go you’ll know.

Cheap hotels near Kazan Arena football stadium (Where to Stay ?)

The authorities seem to be going all out and leaving nothing to chance when it comes to ensuring there’s adequate accommodation for every visitor. Kazan already boast a well-developed hotel industry as they recently hosted the Universiade and the World Aquatics Championships. The city already has over 10,000 hotel rooms available and are working to increase that number to 11,500.

In addition to that, there is an assortment of mini hotels and newly built hotels which will see the city having in excess of 14,000 rooms.

This UNESCO World Heritage recognised site was built in the mid-1500s after Tsar Ivan the Terrible defeated Kazan’s khanate. Here you will get to absorb the city’s fascinating and turbulent past as well as its abundance of modern offerings.

Kazan is where history and modernisation kiss and exist as one, giving the city a unique atmosphere. Here you’ll find an abundance of mosques and churches, museums, monuments traditional wooden houses, soaring modern skyscrapers, and cultural centres.

Kazan was one of the 11 cities of Russia where much the action took place during the 2018 World Cup. The 2018 games took place from 14 June to 15 July and football fans from all over the world were descending on Russia’s third largest city to witness six games of the tournament: four group stage matches, a 1/8 match and a quarterfinal game.

Are you a foody? Great! Russians love their food and you will too. What’s great football matches in an amazingly euphoric atmosphere without some great food and drinks to wash it all down?

Schedule some time in the city to go out and explore Kazan in Russia. You’ll enjoy it. Don’t be a spoil sport and only go from the games back to your hotel room. You can get around by taking the Trans-Siberian Railway, grab a cab, or hire your own ride.

Why not learn a little of the Cyrillic alphabet before your Russia trip comes to an end. It’s really not as difficult as it looks, plus, it’s a great way to gain some independence and read signs and menus on your own. 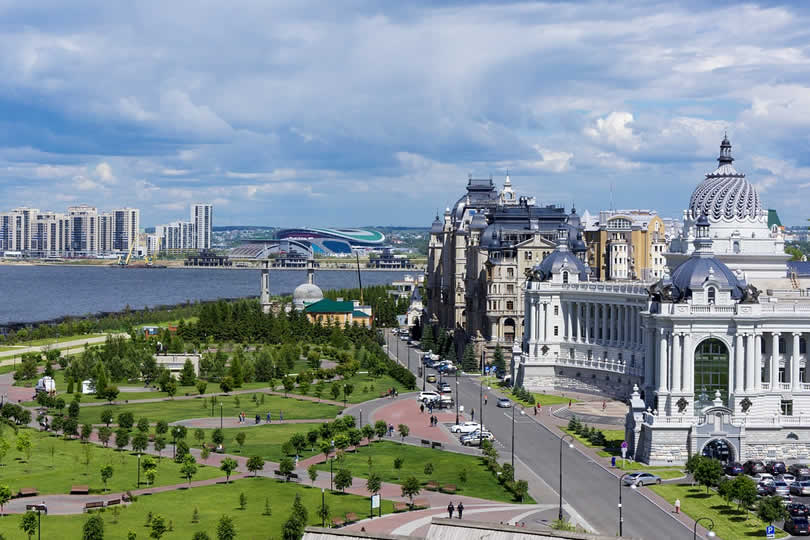 Location — Located in the north-east area of the city on the west bank of the Kazanka river. The center of Kazan is approx. 6km or 3.7mi away. The ground can easily be reached by tram, bus and trolleybus.